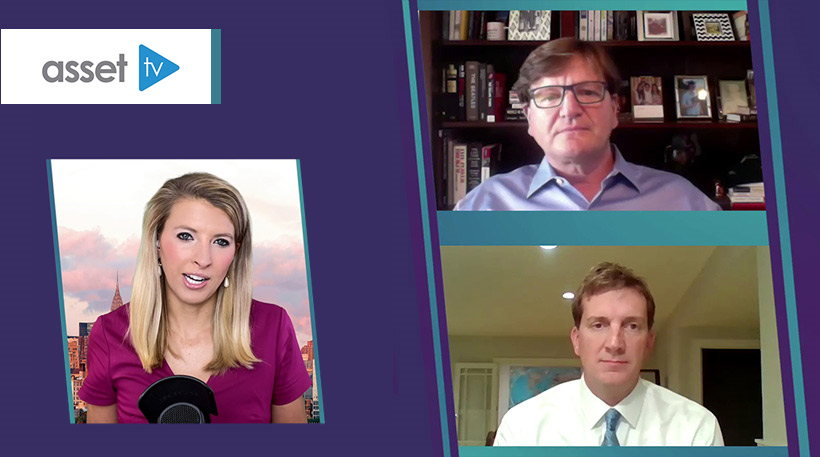 The interview pairs Nelson with small cap value portfolio manager Bill Hench, a principal at Royce Investment Partners. Each provides his perspective on including small cap exposure in clients’ portfolios at a time when the Russell 2000 began to make its move in September, finally showing strength that many have been waiting for.

“We focus on finding secular growth situations where it won't matter that much whether growth is in favor or out of favor, or whether the economy is growing at 3% or contracting by 1%,” says Nelson.

“We spend our time trying to find those bottom-up situations where the company is in its own bull market. It's got tailwinds, and it's going to grow at a robust rate and sustainably for several quarters in a row and it doesn't need the macro as a tailwind. It doesn't need the timing to be just right where we are in the cycle. That can be a tailwind or a headwind, but we spend less of our time forecasting the macro and more of our time on the bottom-up stock analysis itself, the company analysis itself,” he says.

Smaller stocks “look really inexpensive versus large caps,” he says. He bases that, he says, on valuation metrics that go beyond P/E ratios, but also include price-to-sales ratios and price-to-cash flow ratios.

Such a rotation toward small caps could have a “turbocharging” effect just as a challenging 2020 is coming to an end.

The interview includes Nelson’s thoughts on the team's performance year to date. “I'm really proud of the fact that in the first quarter of the year, when things were basically collapsing toward the end of the quarter, we outperformed the benchmark by several hundred basis points [see this post]. In the June quarter where you had sort of the mirror image of what happened in the first quarter, we outperformed the benchmark [see this post]. We had two extreme situations, and we were able to navigate through both extremes and add value relative to a passive approach, and in the September quarter we added on additional outperformance.”

“So, it's been a strong year so far, and from a high level what we're really good at doing is finding big winners and cutting our losses quickly when we stumble upon losers, and we do stumble upon losers. We don't bat 1000 by any means, but what we're really good at is cutting those losses, recognizing that the thesis has changed and taken a turn for the worse, and we’ve got to get out of the way and move on.”

The two PMs make their respective cases for small cap growth and small cap value, including at one point commenting on the same stock. While Hench no longer holds Generac, it’s now a top 10 holding in CTSIX.

Morningstar Overall RatingTM Among 576 Small Growth funds. The Fund's risk-adjusted returns based on load-waived Class I Shares had 4 stars for 3 years, 4 stars for 5 years and 4 stars for 10 years out of 576, 505 and 379 Small Growth Funds, respectively, for the period ended 6/30/2021.

“That's the way it works,” says Nelson. “The value guys scoop them up at the bottom and once the visibility gets better and fundamentals start to improve and those valuations expand, that's when we tend to show up and start buying into those stocks, when it becomes believable that the fundamentals are actually improving…we traffic in different parts of a company's life cycle.”

Investment professionals who are planning to increase clients’ small cap exposure at this time may find an easier transition to small cap growth, according to Nelson.

“As I put myself in the shoes of an asset allocator or advisor, and if I'm thinking about moving assets away from large growth because the valuations have expanded so much and they've outperformed now for so many years, it seems more reasonable to me to allocate to small growth from large growth, because the fundamentals in small growth are still very strong and they trade at a big discount to large growth.

“In small value,” Nelson continues, “things are a lot murkier. Bill touched on industrials, banks, energy, there's more on the come there fundamentally. There's just a lot more murkiness, and they're cheap, but they're cheap for good reason, and it's because the fundamentals are so dicey, broadly speaking.”

“Why have any in small value? Because we might have a market that doesn't care that fundamentals are murky short term. [Investors] might just love small value [stocks] because they are cheap, and things just getting less bad would be enough for that to be a leadership asset class…When I mention that small tends to outperform large coming out of a recession and in the early stages of a bull market, there have been many instances of that. Sometimes small growth leads, sometimes small value leads, call it a coin toss,” says Nelson.

In the absence of clarity from historical performance, Nelson says, he defaults back to this: “There's nothing better than an investment that has strong fundamentals, that's got a very reasonable valuation, and I think that's what you get with small growth, so that's where I'd be tilted.”

Watch the full interview and take the quiz at the end for CE credit. Investment professionals, for more information about CTSIX or CTIGX, contact your Calamos Investment Consultant at 888-571-2567 or caminfo@calamos.com.

Morningstar RatingsTM are based on risk-adjusted returns for Class I shares and will differ for other share classes. Morningstar ratings are based on a risk-adjusted return measure that accounts for variation in a fund’s monthly historical performance (reflecting sales charges), placing more emphasis on downward variations and rewarding consistent performance. Within each asset class, the top 10%, the next 22.5%, 35%, 22.5%, and the bottom 10% receive 5, 4, 3, 2 or 1 star, respectively. Each fund is rated exclusively against U.S. domiciled funds. The information contained herein is proprietary to Morningstar and/or its content providers; may not be copied or distributed; and is not warranted to be accurate, complete or timely. Neither Morningstar nor its content providers are responsible for any damages or losses arising from any use of this information. Source: ©2020 Morningstar, Inc. All rights reserved. 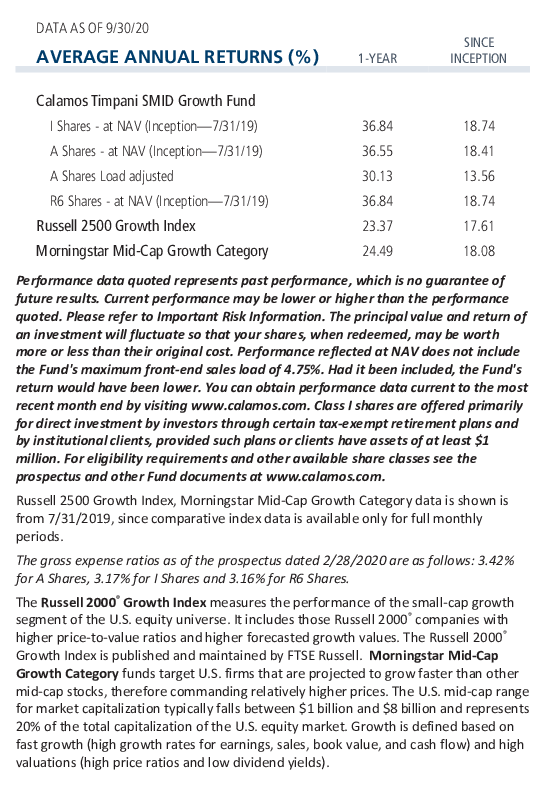 The principal risks of investing in the Calamos Timpani SMID Growth Fund include: equity securities risk consisting of market prices declining in general, growth stock risk consisting of potential increased volatility due to securities trading at higher multiples, and portfolio selection risk. The Fund invests in small capitalization companies, which are often more volatile and less liquid than investments in larger companies. As a result of political or economic instability in foreign countries, there can be special risks associated with investing in foreign securities, including fluctuations in currency exchange rates, increased price volatility and difficulty obtaining information. In addition, emerging markets may present additional risk due to potential for greater economic and political instability in less developed countries.