On August 5, Calamos hosted a Small Cap Growth Review and Outlook with Brandon Nelson, CFA, Senior Vice President and Senior Portfolio Manager of the Calamos Timpani Small Cap Growth Fund (CTSIX). To listen to the call in its entirety, go to www.calamos.com/CIOsmallcap-8-5

Calamos Senior Portfolio Manager Brandon Nelson acknowledges the seeming disconnect between the stock market’s “relentless tear” higher since the March lows and the uncertainty related to COVID-19, the state of the overall economy, the upcoming elections, and above-average equity valuations.

Nonetheless, Nelson last week told a group of investment professionals that he expects equities to keep rising (listen to call replay). As the leader of the Calamos Timpani Small Cap Growth Fund (CTSIX) team, Nelson has been more bullish than most since mid-March. This positioning has contributed to the towering difference between the fund’s performance and both the S&P 500 and the Russell 2000 Growth year to date through July 31. 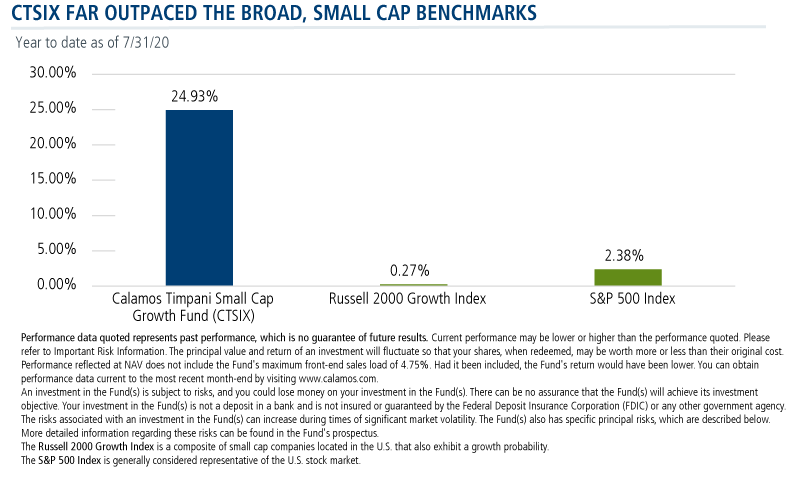 Nelson believes the U.S. economy is coming out of a recession and is in the early stages of a new bull market—a period when small caps perform especially well. He offered these four arguments:

Having made the macro case for equities in general, Nelson also provided a CTSIX update. The small cap valuation case is even more compelling, he said. For more than 3.5 years, small caps have underperformed large caps and, as a result, currently trade at a significant discount relative to historical norms (see related post).

He expressed enthusiasm for the small cap growth opportunities the team is finding across several sectors.

Secular themes include healthcare, ecommerce, cloud-based communications, and software security, all of whose growth has accelerated since COVID-19 hit the United States. Other themes relate to consumer discretionary stocks that are benefiting from changes in consumer behavior.

“For instance, one emerging trend we see is that consumers are spending more time outdoors, in safe, less crowded settings. Families are still going on vacation but instead of flying to theme parks, they are renting or buying RVs and are choosing to go camping, fishing or boating. We own stocks like Sportsman’s Warehouse, Thor Industries, and OneWater Marine as ways to get exposure to this theme.

“Another trend we see,” he continued “is that consumers are moving from cities to suburbs. They want to be in less crowded and less expensive downtown locations, especially if they now have more flexibility to work from home. This, along with exceptionally low mortgage rates, is providing a boost to several companies including certain home builders, building products companies, and residential real estate brokers. We own stocks like LGI Homes, TopBuild and Redfin as ways to get exposure to this theme.”

Investment professionals, for more on CTSIX, listen to the call replay, read the latest quarterly commentary or contact your Calamos Investment Consultant at 888-571-2567 or caminfo@calamos.com. 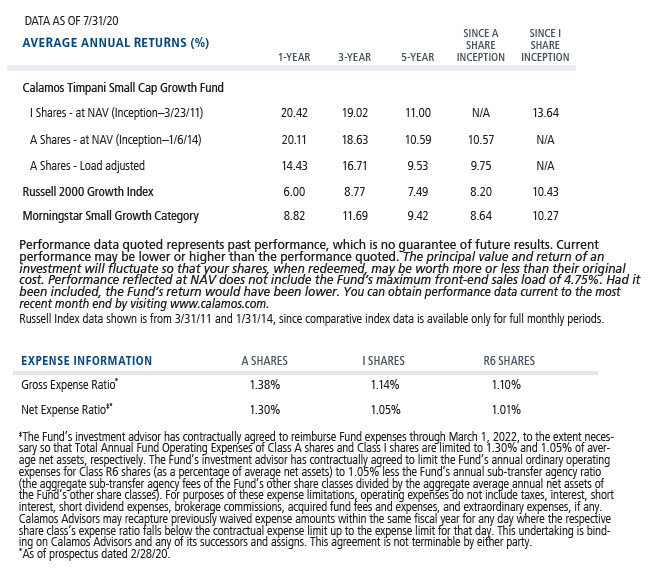 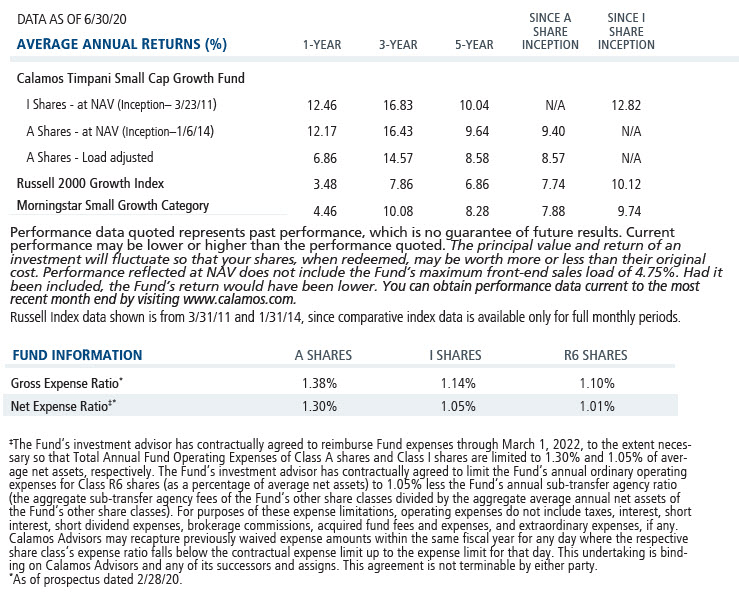 The Russell 2000 Growth Index is a composite of small cap companies located in the U.S. that also exhibit a growth probability.

Morningstar Small Growth Category includes small-growth portfolios that focus on faster-growing companies whose shares are at the lower end of the market-capitalization range.

Price/Earnings Ratio Is the current stock price over trailing 12-month earnings per share.