“Diversification drove our return. It wasn’t us being reckless with a sector weight or an individual stock,” says Brandon M. Nelson, Senior Portfolio Manager of Calamos Timpani Small Cap Growth Fund (CTSIX). “Ours is a very calculated, risk-sensitive approach to managing the portfolios. It wasn’t us being cowboys, shooting for the moon, and hoping it went our way. It was us being very calculated in our approach.”

These achievements are the result of a process that Nelson simplifies as “we have been good at finding big winners and sticking with them, and we have also been good at damage control and reducing exposure quickly to losing situations.”

CTSIX’s 2020 outperformance started early in 2020 (see this post), well before the small cap rally in the fall. Looking ahead, Nelson is positive on the prospects this year for small caps as a whole and for his fund in particular.

Small caps may be just getting started, based on historical data Nelson cites. When small caps have led, they’ve led big and they’ve led for an extended period of time—an average of 84 months and historically never less than 40 months, according to the Leuthold Group. 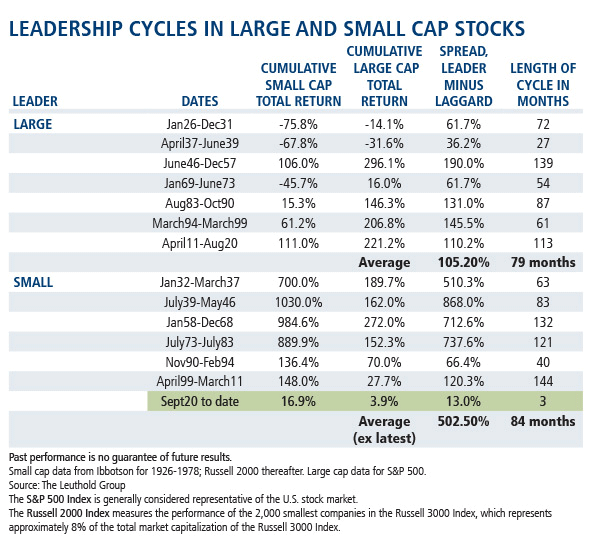 The historical performance track record for CTSIX isn’t quite as long but it’s consistent with the theme.

The chart below shows four corrections in the S&P 500 since the fund’s inception, and the table below compares CTSIX’s one-year performance from exactly where we are now—nine months after the bottom—to both the Russell 2000 Growth Index and the S&P 500. 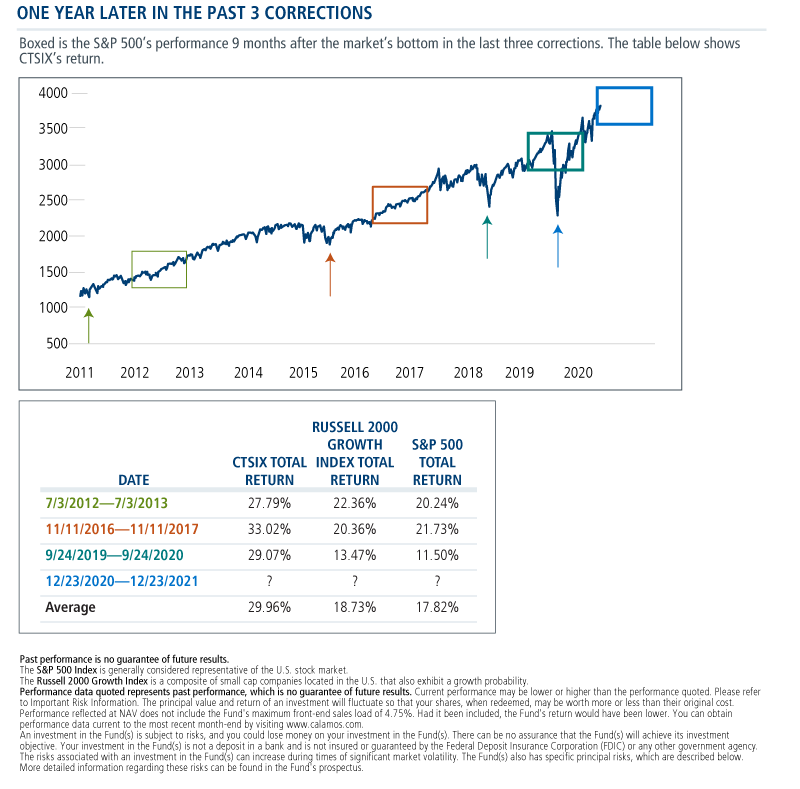 The average return of the previous three corrections is 29.96%, better than the index by 1100 basis points on average. It’s also significantly higher than the S&P 500’s return in those years.

“Investment professionals look at what the fund did in 2020 and wonder if they ‘missed it.’ Well, in the last three times this happened, you wouldn’t have missed it. You would have had another 30% in front of you,” says Nelson. “This is strong outperformance, in absolute and relative terms and, by the way, a lot better than your S&P 500 index fund.” 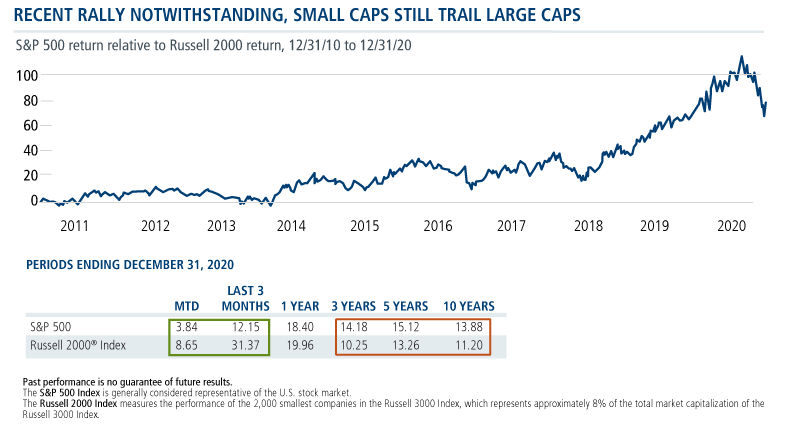 Finally, while much has been made of small caps’ move late last year, Nelson comments on the valuations of Russell 2000 stocks versus the larger stocks of the Russell 1000.

“Even after November, which was the biggest gain for the Russell 2000 in its existence, and even after December," Nelson notes, "valuations have moved to only the 31st percentile.” 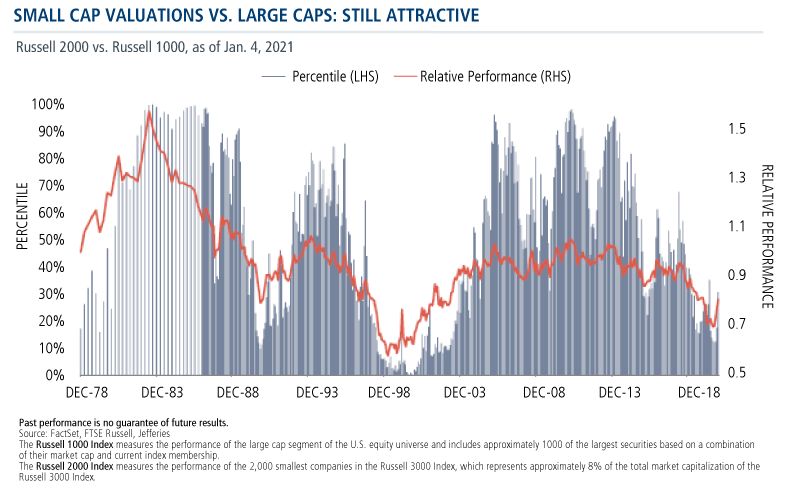 “There’s a long way to go to get back to parity,” he concludes, adding that the fundamentals continue to suggest that the small cap rally is sustainable (see related post). 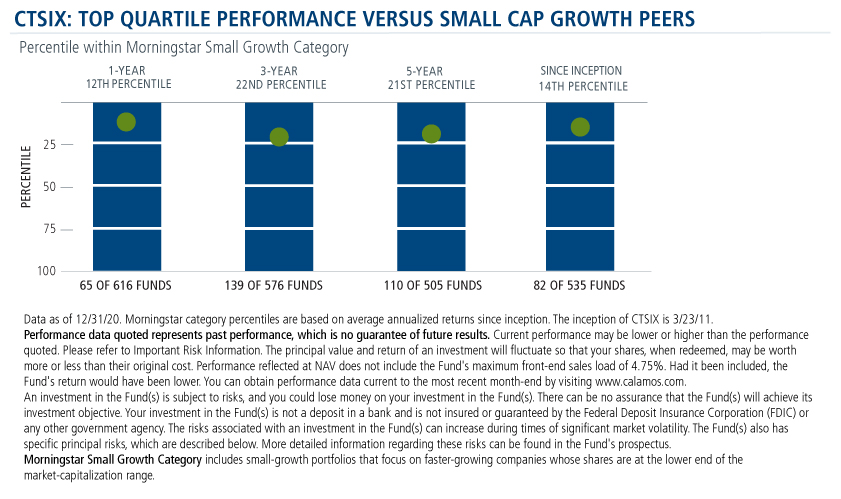 Investment professionals, for more information about CTSIX and Nelson’s optimism about 2021, contact your Calamos Investment Consultant at 888-571-2567 or caminfo@calamos.com. 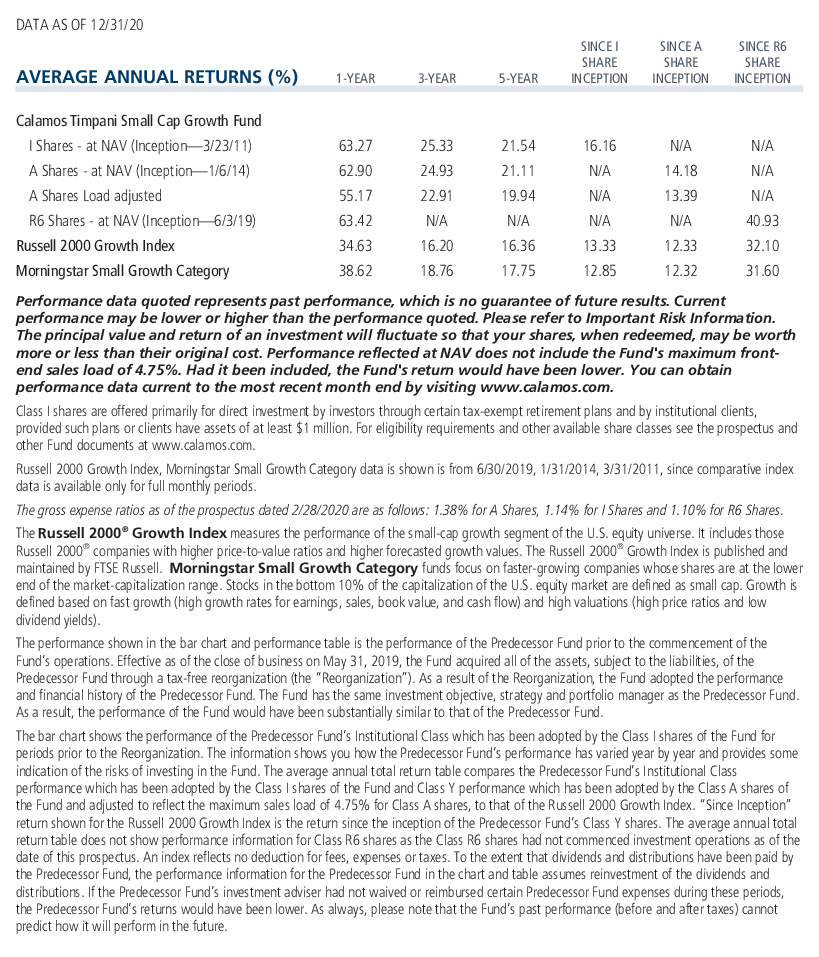 Morningstar Small Growth Category includes small-growth portfolios that focus on faster-growing companies whose shares are at the lower end of the market-capitalization range.

Standard deviation is a measure of volatility.