Looking for a Small Cap Rally in 2020? Now Is the Time to Prepare

High growth, high expectation stocks are subject to ebbs and flows, Nelson notes—with the most recent ebb starting in July 2019. The CTSIX team compares this period to the 2014-2015 correction which, as in 2019, was sparked by a dramatic rotation into deep value stocks at the expense of growth stocks.

When that happens, Nelson says, “the only way to win is to cheat, and we don’t do that. We're style-pure, we don't drift. There are different shades of what we do, but we stay in our stylebox and we won't drift. Because of that, when there’s a vicious rotation against growth, it can be a difficult period.”

“Every downtick and uptick has their own sort of unique characteristics. This one has been more fierce than normal, no doubt, and who knows what that means,” says Nelson.

Nelson shares some additional observations about small caps in general and small cap growth in particular. 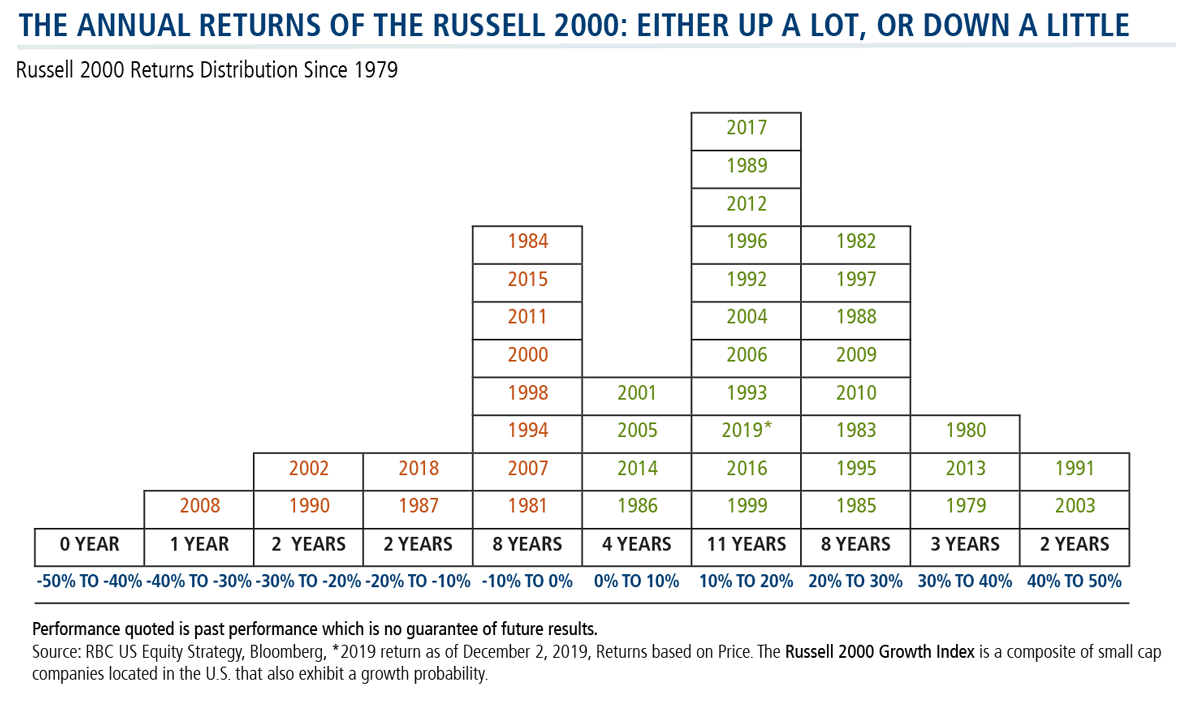 And here’s what the distribution looks like when comparing the relative performance of large caps (S&P 500) to small (Russell 2000). Small caps outperformed 24 of 41 years, or 59% of the time. 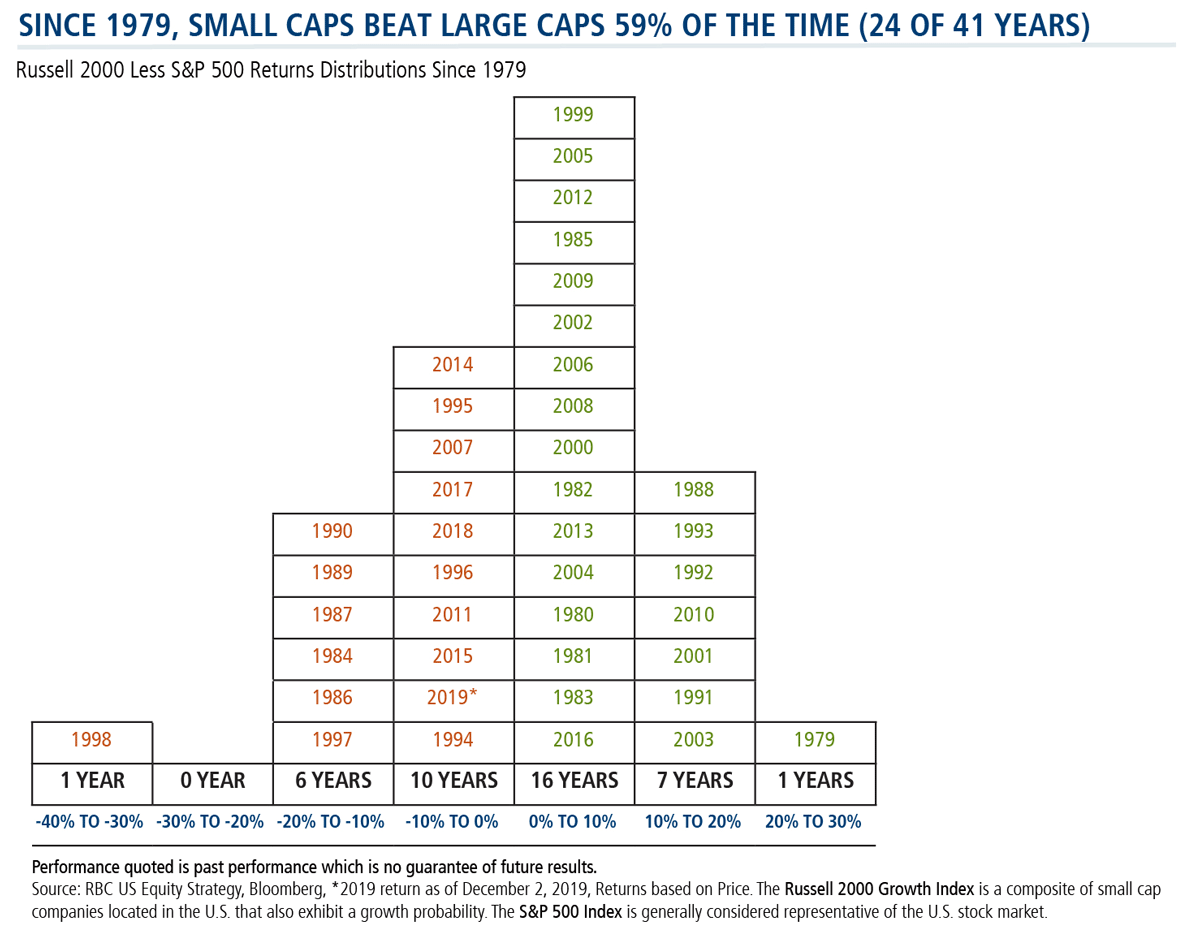 The chart below shows what Nelson has been saying for months—that small caps are inexpensive relative to large caps. They’re in the range of 0.8 to 0.9, or 1.5 to 2.5 standard deviations below the midpoint.

Next look at the table that shows what has historically happened when small caps have been at 1.5 to 2.5 points below the midpoint in the range. As you can see, going forward from that point, small caps have outperformed large caps 83% of the time, and by a magnitude of eight percentage points or 800 basis points.

And here’s a look at the 300-day performance of small cap growth versus large cap growth. Again, small cap growth is so stretched to the downside that Nelson suggests investors could be approaching a “historic opportunity.” 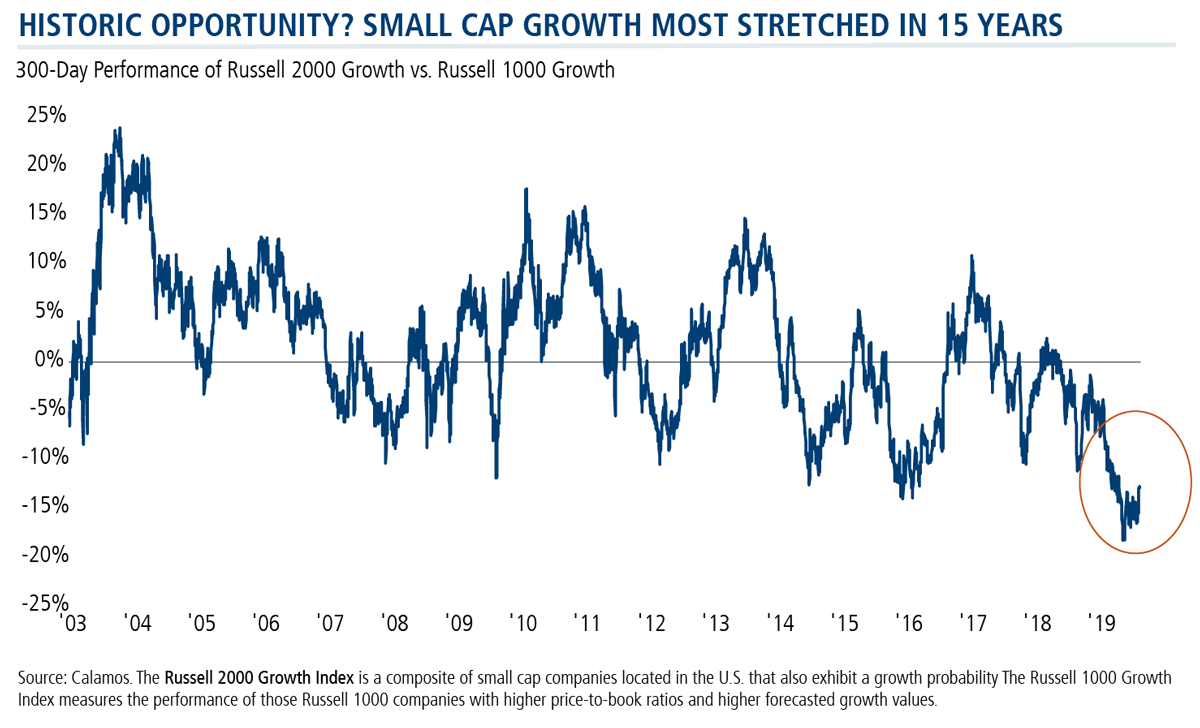 Taken together, today’s factors look like an irresistible set-up to Nelson.

Financial advisors, if you’re doing the work now in anticipation of a small cap rally, talk to your Calamos Investment Consultant about CTSIX’s process for identifying companies with high, sustainable growth potential. Call 888-571-2567 or caminfo@calamos.com.

The Russell 2000 Growth Index is a composite of small cap companies located in the U.S. that also exhibit a growth probability.

The Russell 1000 Growth Index measures the performance of those Russell 1000 companies with higher price-to-book ratios and higher forecasted growth values.

Price-to-earnings ratio (P/E) is a valuation ratio of a company's current share price compared to its per-share earnings.

Standard deviation is a measure of volatility.