“Talk Your Book: The Case for Emerging Markets” co-hosts Michael Batnick and Ben Carlson reviewed how Calamos Evolving World Growth Fund (CNWIX) navigated 2020 (up 54%) and discussed the linkage between the U.S. dollar and EM outperformance.

“What we've seen is that, first off, the dollar tends to operate in longer term seven- to 10-year cycles, as many markets do,” said Niziolek. “…If we do enter a weaker dollar regime where we are in a multi-year period of dollar weakness, ultimately that enables these central banks around the world to loosen policy and implement the reforms that are needed to really unlock the growth potential of these emerging markets.”

Carlson commented, “The cycles are crazy how you can have five- to seven-year cycles where the U.S. will outperform by 200% over EM, and then it switches.”

The hosts touched on the potential to miss out on a mean reversion. “This does seem like the space that everyone is underinvested in…Emerging markets are so much smaller. They can go on a run like they had in the 2000s where they just dominate everything. That could happen. And you can see the flows just completely trying to play catch-up in this space. I could totally see that happen,” Carlson said.

Batnick added, “I think people would be shocked to learn that over the last year, the S&P 500 is underperforming emerging market stocks. The numbers are, it's close, but still. Now don't zoom out, it doesn't look as pretty. But maybe that's the point is that there is so much catching up to do.”

Carlson and Batnick were complimentary about CNWIX’s recent performance. Batnick reminisced about his visit to a Morningstar investment conference four years ago, “right around the time when everyone was saying active management was dead…I remember seeing five dozen companies with exhibit booths that I hadn't heard of.”

“…Calamos, I think, is a good example of why that argument is completely bunk. Active management is not dying. It's quite the opposite,” said Batnick.

Much of the conversation covered the Calamos team’s work in understanding the innovation and disruption underway in emerging markets.

Many emerging markets are starting with “a clean slate,” he said. “They're almost skipping the phase that we [the U.S.] were just in. Whether we're talking about the banking sector and digital payments and the rise of online marketplaces, there isn't that Establishment or that old way of executing commerce and purchasing things that exists in a lot of these developed markets. So they're just skipping that step a little bit, or at least accelerating through that step with a little less disruption, and they're already on to where we're headed.”

The full 37-minute podcast can be found on the major podcast platforms, including Apple Podcasts, Android, Spotify and Stitcher.

Investment professionals, for more about the team’s views in general or CNWIX, contact your Calamos Investment Consultant at 888-571-2567 or caminfo@calamos.com. 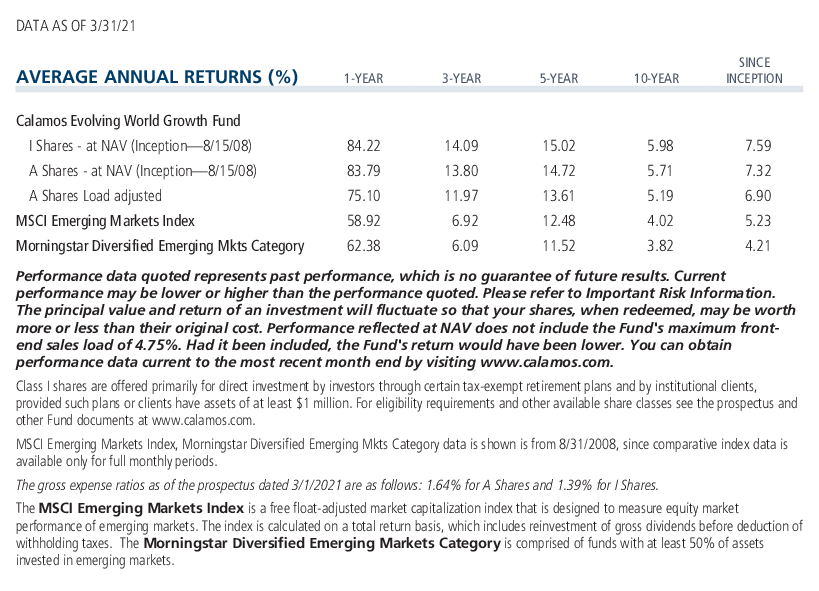 The principal risks of investing in the Calamos Evolving World Growth Fund include: equity securities risk consisting of market prices declining in general, growth stock risk consisting of potential increased volatility due to securities trading at higher multiples, foreign securities risk, emerging markets risk, convertible securities risk consisting of the potential for a decline in value during periods of rising interest rates and the risk of the borrower to miss payments, and portfolio selection risk. As a result of political or economic instability in foreign countries, there can be special risks associated with investing in foreign securities, including fluctuations in currency exchange rates, increased price volatility and difficulty obtaining information. In addition, emerging markets may present additional risk due to potential for greater economic and political instability in less developed countries.

Opinions and estimates offered constitute our judgment and are subject to change without notice, as are statements of financial market trends, which are based on current market conditions. We believe the information provided here is reliable, but do not warrant its accuracy or completeness. This material is not intended as an offer or solicitation for the purchase or sale of any financial instrument. The views and strategies described may not be suitable for all investors. Opinions are subject to change due to changes in the market, economic conditions or changes in the legal and/or regulatory environment and may not necessarily come to pass. This information is provided for informational purposes only and should not be considered tax, legal, or investment advice. References to specific securities, asset classes and financial markets are for illustrative purposes only and are not intended to be, and should not be interpreted as, recommendations.