“Green” Hydrogen Opportunity: More Than a Lot of Hot Air

The global shift to a “green society” is fueling an array of long-term growth drivers and investment opportunities. Renewable energy has emerged as a major global policy initiative with the pandemic acting as a catalyst to that policy momentum. The main drivers of this push involve countries’ desires to (1) reduce their carbon footprint and (2) improve energy security by reducing reliance on imported fossil fuels.  Through this lens, it’s not surprising that Europe is just one region leading the renewable energy push given its relatively higher dependence on energy imports.

We have previously written about areas that we believe will benefit from this global renewable energy push, such as copper (see “Copper: Cyclical Winner in a Shift to a Greener World”). In this post, we’ll take a look at green hydrogen.

Today about 96% of hydrogen is produced through methods that involve the use of fossil fuels. However, there is one method of hydrogen production almost entirely non-dependent on fossil fuels: green hydrogen. Green hydrogen represents less than 4% of current global hydrogen production, but we see a long runway for growth, given the combination of rising demand (Figure 1) and increased global focus on carbon footprint reduction and enhanced energy security.

Green hydrogen production involves a technique called water electrolysis. Purified tap water feeds through an electrolyzer, which is a piece of equipment that uses electric current (supplied from a renewable energy power source such as solar or wind power) to separate hydrogen gas and oxygen. The hydrogen gas is then distributed or stored for later use, and the remaining oxygen is released. Besides minimal fossil fuel input for production, another of the key benefits that green hydrogen provides is to help store excess energy production from renewable energy sources—when electricity generated from sun shining or wind blowing is in excess of what the power grid demands at a specific time. Green hydrogen effectively allows for that excess energy production to be stored for later use in the form of hydrogen. 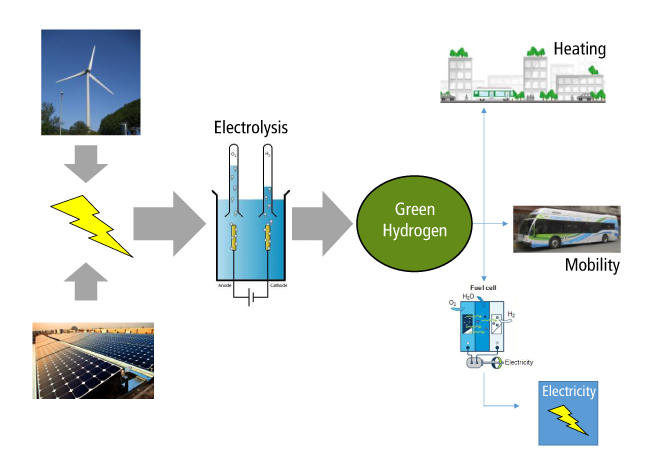 Hydrogen can be used as an energy source within a fuel cell, where a chemical reaction of hydrogen and oxygen generates electricity with the only emission being water vapor.  Some of the major specific and unique use-cases for hydrogen include backup power generation, heavy-duty and medium-duty vehicle transport (such as trucks, trains, ships, cars) and aerospace. Green hydrogen can also be used to effectively reduce emissions from heavy industrial applications like steelmaking, refining, petrochemicals and cement. Compared to other zero-emission alternatives used in transportation (such as batteries), hydrogen fuel cells provide many advantages, including lighter weight, longer range, and faster refueling times.

In addition to cost reductions and scale improvements, the economic attractiveness of green hydrogen as an energy source is getting further support from green hydrogen-specific policies and targets from some of the world’s largest economies. In 2020, aggregate national hydrogen investment pledges increased tenfold versus previous pledge levels. Europe is leading the way with its EU Hydrogen Strategy. Announced in July of 2020, the plan is a real game changer and includes a 40-fold increase in electrolyzer capacity by 2030. Although unlikely to match the EU’s sweeping efforts, we expect additional countries to increase green hydrogen capacity over the next decade as well.

Over the next 20 to 30 years, hydrogen may represent a total global investment opportunity of more than $1.5 trillion. Our global, international and emerging market portfolios have begun to participate in the growth potential of green hydrogen through investments in manufacturers of electrolyzers and fuel cells, and companies that help manage the supply chain of hydrogen from production through to the end customer. Green hydrogen may not be well-known—yet—but as part of the long-term global shift to renewable energy, it’s an area our team is keeping our eyes on.

As a result of political or economic instability in foreign countries, there can be special risks associated with investing in foreign securities, including fluctuations in currency exchange rates, increased price volatility and difficulty obtaining information.