More on the Dollar, Rising Rates and What Both Mean for Emerging Markets

Concerns over two market factors with the potential to jeopardize the resurgence of emerging markets—the direction of the U.S. dollar and rising interest rates—were evident in the questions asked at last week's webcast, Emerging Markets in 2021: The Case for Increasing Exposure Now (replay available on-demand).

Because we couldn’t get to all of the questions asked by the hundreds of investment professionals in attendance, below Nick Niziolek, CFA, Co-CIO, Head of International and Global Strategies, Senior Co-Portfolio Manager, provides some additional context.

The weakness (or strength) of the U.S. dollar is quoted against the value of the DXY, a basket of currencies of the majority of the U.S.'s most significant trading partners. The euro accounts for nearly 60% of the value, Japanese yen nearly 15%, British sterling 12%, and Canadian Dollar 10%. 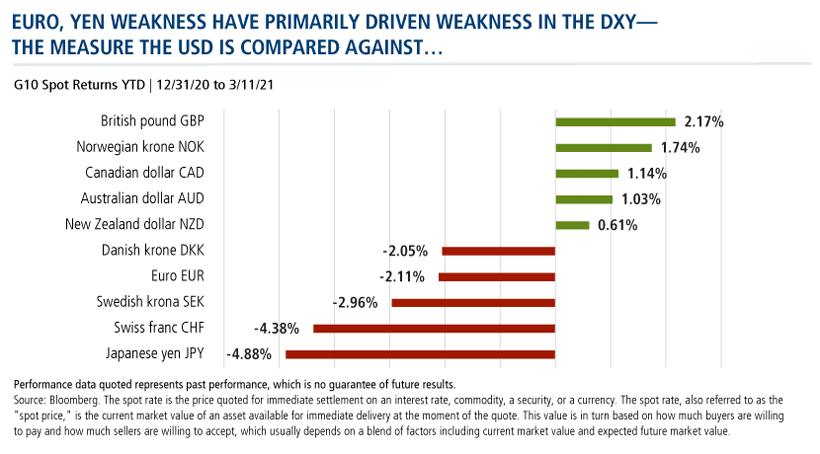 At the same time, in emerging markets, currencies including the Chinese yuan and Indian rupee continue to strengthen.

“There are many factors that drive short-term movements in currencies, with inflation rate differentials, interest rate differentials, current account deficits, changes in public debt, and economic growth differentials to name just a few,” says Niziolek. “Speculation also is a factor in this market.”

Over longer time periods, valuation may also be a factor. Purchasing Power Parity (PPP) is a metric that compares different countries' currencies through a "basket of goods" approach, and illustrates how currencies can move from “expensive” to “cheap” conditions. However, Niziolek says, “many papers have been written about how valuation differentials can persist for multi-year periods before resetting, as we’ve seen in recent years with the USD.”

As webcast attendees heard, the Calamos Global/International team has high conviction that the dollar weakness will continue.

“We believe the recent strength we have seen in the dollar (which is normal and expected) was likely driven by an improvement in growth expectations in the U.S. as the COVID-19 vaccine rollout accelerates and additional fiscal stimulus has been announced, with some speculative positions also being unwound,” according to NIziolek.

But, he continues, “our view is this strength is likely temporary, and we’ll see further weakness when growth accelerates overseas and the global recovery becomes more synchronized.”

The opposite scenario—the strengthening of the dollar and a break in the dollar’s current downtrend—could occur if there was another “flight to safety” due to an unforeseen risk event (e.g., vaccines were no longer effective, another global growth shock, etc.).

In that case, Niziolek allows, a persistently stronger U.S. dollar would be a headwind for emerging markets risk assets. “As always, there will remain bottom-up opportunities and some countries will be in a better position than others, but the returns from EM during strong dollar regimes tend to be less than during stable-to-weak dollar regimes,” says Niziolek.

Do rising rates have the potential to curb EM growth? It depends on why rates are increasing, Niziolek explains.

China, he adds, is one of the few countries in the world currently providing positive “real” returns—i.e., interest rates minus inflation (see this post for more on the team’s bullishness about China).

Niziolek acknowledges that many investors may be having flashbacks to the Taper Tantrum of 2013, when EM currencies sold off. But, he says, “I would suggest that many emerging market countries are in a much better position to withstand rising rates than they were in 2013.”

As shown below, heading into the 2013 period, many EM currencies looked overvalued from a PPP perspective while the countries most impacted were running twin deficits both in their current account and budgets. Today, according to Niziolek, EM FX is more attractively valued, and many countries are in a much better position both fiscally and from a current account deficit standpoint.

Finally, Niziolek adds that EM early in 2013 was benefitting from significant inflows into the local bond market. “While we’ve seen some rebound in flows into EM recently, we are not in a similar position to 2013,” he says.

Investment professionals, for more about the team’s view on the dollar, emerging markets in general or Calamos Evolving World Growth Fund (CNWIX), contact your Calamos Investment Consultant at 888-571-2567 or caminfo@calamos.com.

The principal risks of investing in the Calamos Evolving World Growth Fund include: equity securities risk consisting of market prices declining in general, growth stock risk consisting of potential increased volatility due to securities trading at higher multiples, foreign securities risk, emerging markets risk, convertible securities risk consisting of the potential for a decline in value during periods of rising interest rates and the risk of the borrower to miss payments, and portfolio selection risk. As a result of political or economic instability in foreign countries, there can be special risks associated with investing in foreign securities, including fluctuations in currency exchange rates, increased price volatility and difficulty obtaining information. In addition, emerging markets may present additional risk due to potential for greater economic and political instability in less developed countries.

Opinions and estimates offered constitute our judgment and are subject to change without notice, as are statements of financial market trends, which are based on current market conditions. We believe the information provided here is reliable, but do not warrant its accuracy or completeness. This material is not intended as an offer or solicitation for the purchase or sale of any financial instrument. The views and strategies described may not be suitable for all investors. Opinions are subject to change due to changes in the market, economic conditions or changes in the legal and/or regulatory environment and may not necessarily come to pass. This information is provided for informational purposes only and should not be considered tax, legal, or investment advice. References to specific securities, asset classes and financial markets are for illustrative purposes only and are not intended to be, and should not be interpreted as, recommendations.