This Is Far from Over, Don’t Miss the Rest of What Could Be a ‘Remarkable’ Period for Equities: CPLIX’s Grant

“Make hay while the sun shines.” That’s how Michael Grant summarized his message at the end of last week’s CIO call. (To listen to the August 12 call, go to www.calamos.com/CIOlongshort-8-12.)

Contending that “the vast majority of the market” is making one set of assumptions about the economy based primarily on past experiences, the Co-CIO, Senior Co-Portfolio Manager and Head of Long/Short Strategies explained that he strongly disagreed with the “fear of peaking economic momentum.”

“The combination of stunning policy support and the fact that the private sector is in such robust health makes it very hard to think that this is not an economic cycle that has at least a couple of years in it. Just the restocking cycle alone should last through 2022 and possibly into 2023,” he said.

Further, Grant said, “It is too early to call the top in S&P 500 earnings. I think earnings are going to continue to trend higher at an almost historic pace between now and the middle of next year…this is a remarkably favorable fundamental setting.

“There are parts of the market, which are bubbles and are valued egregiously,” he acknowledged. “But you can’t look at that number of just over 16 times peak earnings and say the world’s gone crazy.”

Investors are unsettled, Grant said, in part because of the historic nature of the COVID-19 pandemic and likely also due to uncertainty about where the market is headed.

Deceleration in many leading indicators should not be mistaken for late cycle dynamics, according to Grant.

“It is absolutely true that many measures of activity are peaking in terms of momentum and rate of growth. That’s simply because those rates of growth are historic...But it’s equally important to understand that rates of growth always peak in the 12 to 18 months following the recession. And yet the economic cycle and the equity cycle can go on for years, and has historically done so,” said Grant.

To track progress, pay attention to these two indicators.

Yet to be determined, he said, is the “degree of deceleration we’ll see between now and the second half of next year and whether the economic cycle stagnates much like it did after 2009. Or, does activity settle down at a normalized rate that’s fundamentally higher than the pre-pandemic period?”

Grant asked, “After all the disruption that we’ve seen, is four quarters enough to address supply chain disruption or normalization or back to work?

“What’s going on in the economy is much more substantial than simply refilling the supply chains. We think supply chains are disrupted because they have to be rebuilt for a fundamentally higher level of nominal demand. If that conclusion is correct, then we’re heading into a real investment cycle. And it is not something that can simply unfold or be resolved in just four quarters.”

The consumer, Grant said, may be on the brink of finally achieving the liftoff that they failed to achieve since the Great Financial Crisis.

Grant believes that the U.S. is “very close if not at a climax of the current wave of the Delta virus.” Elsewhere, he said, much of the reopening is still ahead. But by this time next year, he expects the world to be over the pandemic. A two-year duration is consistent with previous pandemics.

“Ironically,” he said, “the pandemic fears are the wall of worry that the market is climbing. And it is unexpectedly the support for risk assets because it ensures that policy support remains fully behind the economy.”

But, Grant recognized, “the bond market is giving off a very different signal…And my simple answer for that is I think the Fed has cornered the long-term bond market. And it currently accounts for 50% to 60% of all activity in 10-year Treasuries.”

“If the deceleration in the leading indicators goes all the way back to neutral in the next few quarters and therefore leads to a reversal of the increase in earnings estimates that we’ve seen,” he said, “then the bond market is right and I am wrong.”

A global fund with a long-time bias toward U.S. equities, CPLIX’s positioning reflects Grant’s expectations of reflation and “a real investment cycle.”

“Whenever I see everyone standing on one side of the boat, I want to think very hard about ensuring that I have at least one foot on the other side of the boat,” said Grant. “And that alternative view to the future is a more reflationary path. At minimum, it argues for balance in your portfolio.”

As such, he said, “two-thirds of the long book is positioned to benefit from ongoing cyclical recovery, not just cyclical exposure but holdings in sectors such as industrials, financials, consumer durables—industries where operating margins and therefore earnings can move materially higher.

“We haven’t given up on quality growth stocks that outperformed in 2020 relative to the general market. About one-third of the long book is in what we would call well understood, well positioned growth, which still has favorable investor sentiment.”

“But," he said, "the important point is that that balance is very different than the benchmark composition. The [S&P 500] is more two-thirds growth and one-third cyclical recovery."

This current opportunity to “make hay” will be finite, according to Grant. By next spring, he said, “the bulk of the risk-on story in equities will be in the price. From that point, future nominal returns in equities become much lower.” The team anticipates the possibility of “a major bear market” in 2023-2024.

Investment professionals, for more information about Grant’s perspective or CPLIX, contact your Calamos Investment Consultant at 888-571-2567 or caminfo@calamos.com. 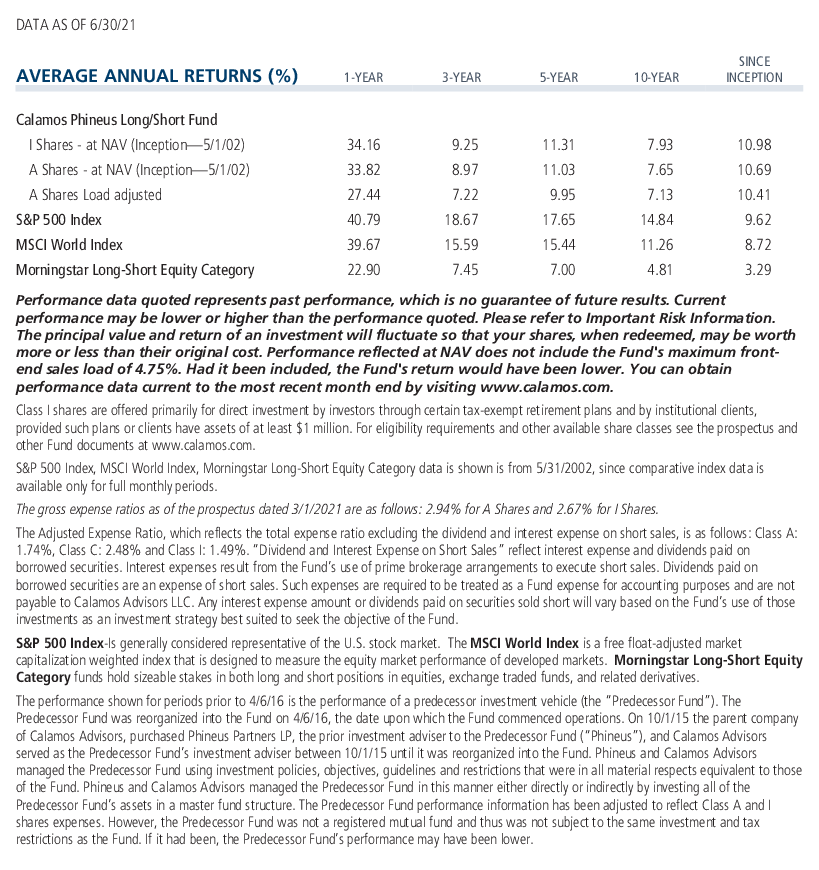 Morningstar Long/Short Equity Category funds take a net long stock position, meaning the total market risk from the long positions is not completely offset by the market risk of the short positions. Total return, therefore, is a combination of the return from market exposure (beta) plus any value-added from stock-picking or market-timing (alpha).

Morningstar RatingsTM are based on risk-adjusted returns and are through 7/31/21 for the share class listed and will differ for other share classes. Morningstar ratings are based on a risk-adjusted return measure that accounts for variation in a fund's monthly historical performance (reflecting sales charges), placing more emphasis on downward variations and rewarding consistent performance. Within each asset class, the top 10%, the next 22.5%, 35%, 22.5%, and the bottom 10% receive 5, 4, 3, 2 or 1 star, respectively. Each fund is rated exclusively against U.S. domiciled funds. The information contained herein is proprietary to Morningstar and/or its content providers; may not be copied or distributed; and is not warranted to be accurate, complete or timely. Neither Morningstar nor its content providers are responsible for any damages or losses arising from any use of this information. Source: ©2021 Morningstar, Inc.