No Recession and the Value of a Long/Short Model: Grant Talks the CPLIX Book on Animal Spirits Podcast

General lack of clarity about the direction of the economy has to do with uncertainty surrounding inflation, what Grant called “the paramount question of the moment,” and investors “being held hostage to the US 10-year yield.”

“I think the Fed's first priority is to provide cover for its late intervention. It needs to get rates to 2.5%, which will happen in September,” said Grant. “At that point, I think the Fed will be able to pause. Politically, this will enable the Fed to be perceived as less hawkish, especially if it can start to see the inflation numbers in different parts of the economy improving. I think that's likely at that point.”

Without a pause, “if the Fed follows market expectations and continues to tighten into spring of next year, then I think we're probably in recession by late 2023.”

However, he continued, “if the Fed pauses this autumn, I think the soft landing is still the best bet.”

Leaning In and Out of Equity Risk

Carlson introduced the discussion by commenting on the challenge of a long/short strategy.

“One of the hard things that I learned from tracking hedge funds back in the day,” Carlson said, “is that long/short funds have a lot of ways to be wrong, because it's not only about picking the right sectors and the right stocks and then which ones to go long and which ones to go short, but it's how much do you short, how much do you go long? What's your net and your gross exposure? Do you have leverage on? How do you balance out your longs and shorts?”

Asked to explain CPLIX’s outperformance year-to-date against its benchmark and peers in the Morningstar Long-Short Equity Category (see post), Grant said, “As usual, there are several themes. One of the big themes, of course, is that we stepped away from the long duration parts of the equity world, the growth technology concept names that could be dramatically repriced if interest rates went higher, because the truth is we had a bull market in stupidity because of all this free money [historically low interest rates facilitating unjustifiable equity valuations].

"When people think about alternatives, they think, oh good, they're avoiding risk. No, no, no, no, no. If you avoid risk, you avoid return. The key is to understand when you are paid properly for taking that unit of risk, because if I'm paid properly, I should be leaning aggressively into it."

Grant went on to comment on “the real value of a long/short model. Unfortunately, many long/short funds are what I call ‘long light’. They promise you 70% of the upside for 60% of the downside, and they don't try and actively manage their equity risk.”

By contrast, he continued, “I think that deciding whether we're properly paid to engage equity risk is the core of anything that calls itself an alternative. For example, we can be 80% net long, or we can be 20% net short. In other words, we can be outright short. So, our willingness to lean into equity risk or lean out of equity risk as we did late last year and the early part of this year was a key reason we were able to protect capital.”

The conversation included a back and forth between Grant and the hosts on allocation decisions related to regime shifts, bottom-up portfolio construction, value versus growth stocks, and the difficulty of shorting stocks.

“There are a few moments in financial history where the alpha opportunity on the short side is broad—2000, 2008 and 15 months ago. But outside of those windows of time, shorting over the long term is for losers,” Grant said.

“The real money in the US economy is always on the long side of some economic value equation. The short book can be important at times to reduce risk or to reduce beta and to control the volatility tails in the financial cycle. That’s absolutely true. But the real money is still made in the long book.”

“Therefore,” Grant continued, “what you want to do when we enter these periods of financial asset repricing, which is what we've gone through in the last six months, is we want to behave like a market neutral fund. We want to use the short book to cut off that volatility tail.

“But after that storm has passed, after the ferocity of it is largely done, it's far better for us to ask where can we really make money on the long side at this point, because everything's been taken down.”

Carlson followed up by asking, “So you guys have obviously done really well this year by going to a more defensive posture. How do you get over the psychological hurdle of wanting to stay there because it feels more comfortable than going out and taking some more risk again?”

Grant’s response: “I would flip it around and say that I feel far more comfortable taking risk than sitting in cash. What I have to do is fight the temptation to buy into the decline too early. The reason is that at the end of the day, in the long-term we believe in equities, and we tell our clients to believe in equities. Therefore, in the middle of the storm, we have to have the courage to embrace that and start leaning into risk again.

“When people think about alternatives, they think, oh good, they're avoiding risk. No, no, no, no, no. If you avoid risk, you avoid return. The key is to understand when you are paid properly for taking that unit of risk, because if I'm paid properly, I should be leaning aggressively into it.”

CPLIX has had above average net exposure, compared to its historical levels, throughout 2022.

To listen to the full interview, you’ll find the podcast on the major podcast platforms, including Apple Podcasts, Android, Spotify and Stitcher.

Investment professionals, for more about Grant’s outlook or CPLIX, contact your Calamos Investment Consultant at 888-571-2567 or caminfo@calamos.com. 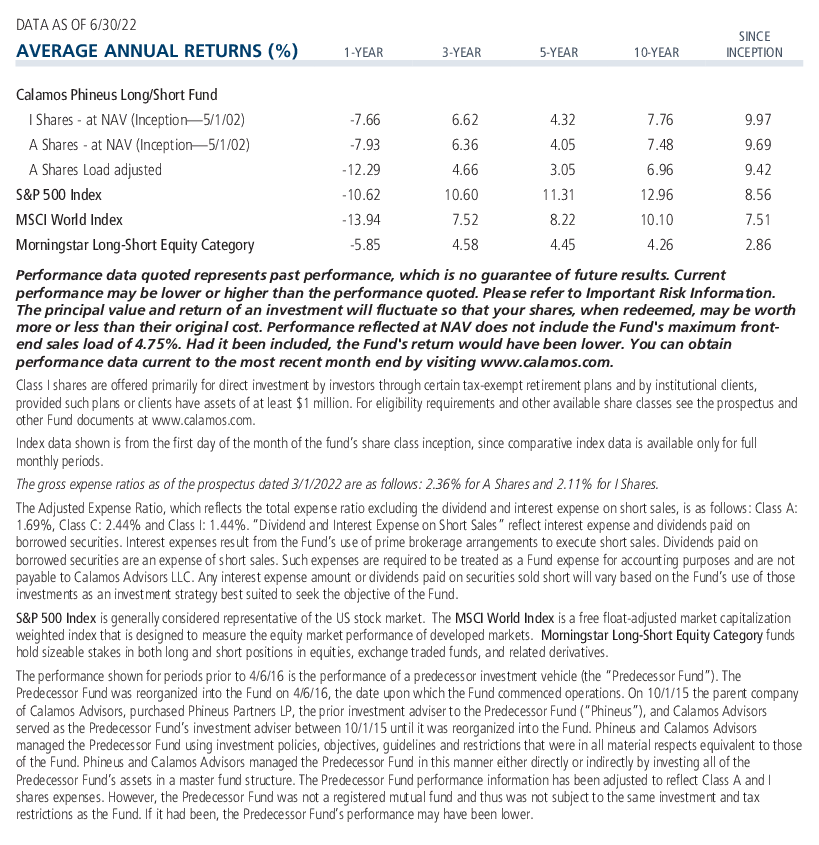 Alternative investments may not be suitable for all investors. The fund takes long positions in companies that are expected to outperform the equity markets, while taking short positions in companies that are expected to underperform the equity markets and for hedging purposes. The fund may lose money should the securities the fund is long decline in value or if the securities the fund has shorted increase in value, but the ultimate goal is to realize returns in both rising and falling equity markets while providing a degree of insulation from increased market volatility.