Asked for a client-ready explanation of Calamos Market Neutral Income Fund (CMNIX), PM Eli Pars offers this: “I say we’re a trading strategy trying to take advantage of opportunities in the markets with experienced traders who have been trading those strategies for a while…

“And then,” the Calamos Co-CIO, Head of Alternative Strategies and Co-Head of Convertible Strategies, Senior Co-Portfolio Manager continues, “I say look at the fund’s return profile and the outcome. Focus on the result.”

Over the long term, according to Pars, CMNIX “fits really well as a fixed income substitute or replacement to what people used to get from intermediate fixed income in terms of risk and return. The challenge is how to earn 3%, 4%, 5% in a zero-rate world without a lot of rate sensitivity. We’ve generally been able to deliver that most of the time.”

The fund ended July with a 3.00% return year to date. This compared to the -0.67% YTD return of the Barclays U.S. Government/Credit Index and the 1.75% return of its peers in the Morningstar Relative Value Arbitrage Category.

On Tuesday’s kickoff of the Calamos’ CIO Conference Call series for investment professionals (call schedule here), Pars elaborated on the multiple ways his team has found to be opportunistic this year. (To listen to the August 10 call, go to www.calamos.com/CIOmarketneutral-8-10.)

Pleased with the year so far, Pars reported that the fund's core strategies—convertible arbitrage and hedged equity—have been profitable. In a flip from 2020, hedged equity has been the greater contributor to return. He also provided some detail on a new strategy, which is a limited investment in Special Purpose Acquisition Corporations (SPACs).

Pars characterized the fund’s convertible arb approach as a long volatility strategy. “We run the convertibles unlevered, which has historically made for a very steady, albeit somewhat low return. We’re not saying it’s up every month, but most days, most months we made a little money. It has some nice convexity—bigger moves in the market enabled us to make a little more money.”

Pars said he was surprised by the continued “torrid” pace of the convertible market, with issuance in the first half of the year exceeding 2020 (for more on issuance and performance trends, see the Calamos U.S. Convertible Snapshot). As in last year, many of the issuers were new names.

A healthy calendar is positive for a few reasons, he explained.

“New deals tend to come cheap, providing an attractive valuation arbitrage. But they also tend to stir the pot. Issuance of a convertible bond at par may trigger a long-only investor to rotate out of an in-the-money convertible in the same industry that doesn’t have the convexity profile that they want. That may cheapen up that old convertible to the point where we want to buy that,” he said.

Pars also commented on the fund’s international diversification, representing no more than 15% of the portfolio, in issues from Japan, Europe and southeast Asia (mostly China). Some are ADRs while some trade overnight.

“Europe tends to be a higher credit quality market on average, and there are some quirky structural things in Japan that create lower risk opportunities on the convert arb side,” he said. “It’s a nice part of our book that we hope to grow over time, although it will never be 50% of our book.”

That said, he noted that the team takes a different approach from others. “Unlike some of our peers that are very mechanical and methodical to the point where sometimes you can predict where their next trade is going to be, we like to be more opportunistic and work within those guardrails to take advantage of what the market’s giving us.

“Over the years we think that’s served us well,” Pars continued. “It allows us to take advantage of what’s cheap in the options market at any given time. Just like any other markets, values shift…We come in every day and look at the options book and think about what’s different in the market today and how can we trade it around to optimize performance for our investors.”

Call moderator Robert F. Behan, CFA, Calamos Executive Vice President and Chief Distribution Officer, introduced the diversification into SPACs as the latest example of how the fund has used opportunistic buckets to potentially generate returns over the years.

Pars said he and another team member had experience with a previous generation of SPACs 15 years ago. In the last two years, SPAC IPOs have spiked, providing an interesting opportunity for the fund starting in January because they “look a lot like a convert” and share some characteristics, he said. 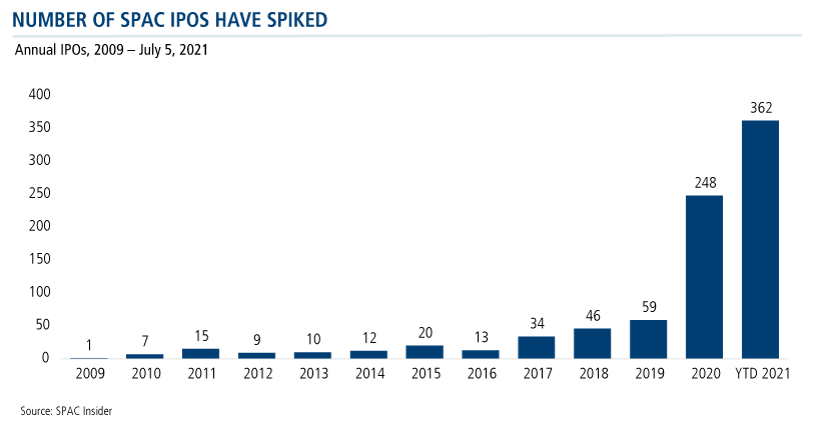 Here’s how Pars describes the opportunity:

“So, I get a free look at whether the market thinks the acquisition is attractive. If there’s no deal at the end of two years, I get the $10 back. What’s interesting is that you also get some fraction—a quarter, a third or a half—of a warrant stapled to it that makes that theoretical value at issuance worth $10.25, $10.50, $10.75, depending on the structure of it. So, we’re buying it at a theoretical discount…

According to Pars, the biggest downside of SPACs to CMNIX is “dead money.” That’s true because of how the team trades them.

SPACs are the kind of trade whose risk/return profile fits the fund, Pars said. While it remains to be seen whether they’re a long-term opportunity, they currently represent 4% of the portfolio.

The call concluded with a Q&A that sought Pars’ view on inflation and rising rates.

The hedged equity strategy doesn’t have much rate exposure, he said, but elaborated on why the convert arb book is also less affected when rates rise.

The conversation also touched on Morningstar’s reassignment of the fund in April to the new, unrated Relative Value Arbitrage category. The category reassignment followed a 10-year period when CMNIX consistently earned five and four stars while in the now defunct Market Neutral category (see this post).

“Can’t get too hung up on what the sportswriters are writing about the team,” Pars added.

The Bloomberg Barclays U.S. Government/Credit Index comprises long-term government and investment grade corporate debt securities and is generally considered representative of the performance of the broad U.S. bond market. Unlike convertible bonds, U.S. Treasury bills are backed by the full faith and credit of the U.S. government and offer a guarantee as to the timely repayment of principal and interest.

The Morningstar Relative Value Arbitrage Category is comprised of funds that seek out pricing discrepancies between pairs or combinations of securities regardless of asset class.