“A valuation re-rating lower without a lot of teeth behind it”—that’s how Calamos Senior Portfolio Manager Brandon Nelson describes what’s been happening with small caps.

As tracked by the Russell 2000 Index, small caps started their decline near Thanksgiving and entered bear market territory on January 27. They seesawed back and forth since, finishing February with a -8.66% year-to-date return. Nelson provided his analysis of the volatility within the asset class and its impact on Calamos Timpani Small Cap Growth Fund (CTSIX) on last week’s CIO Conference Call (listen to the call in its entirety here).

Small cap growth stocks, in particular, have taken “a pounding” approaching the magnitude of their drawdown during the dot com bubble in 2000. In the one-year period between March 15, 2000 and March 15, 2001, Nelson recalled, the Russell 2000 Growth Index underperformed the Russell 3000 Index by about 44 percentage points.

But here’s the difference, he said: While small caps today have lost about 70% of the ground lost 20 years ago, investors at that time were reacting to severe negative earnings revisions. By contrast, today’s small company fundamentals are fairly strong, according to Nelson.

On earnings calls, companies are “talking about a really strong 2022, but it’s going to be more second half-weighted than people were originally modeling. They’re expecting some softness in the March quarter, they’re guiding to that. [Covid variant] Omicron sort of bled over into January and that disrupted some operations to some extent,” he said.

Recent earnings updates have revealed a few companies with issues related to Covid, supply chain and/or labor constraints. “There are problems here and there. There always are, but for the most part, business is fine, and in a lot of cases, much better than fine, but stocks are getting hit anyway,” Nelson said.

“Down is down and it’s just as painful either way,” he acknowledged, “but to me, it’s more believable that you could see a recovery, because [the downturn] is not being led by negative estimate revisions.”

“There are a lot of things to worry about,” Nelson continued, “the Fed tightening cycle and the trajectory. Of course, we’ve got geopolitical concerns now front and center. Covid is still lingering. People are worried about inflation. It’s murky right now but a lot of damage has already been done.”

Referring to the below chart, he said, “Historically, this [when small caps are down 20%] is typically a good entry point. It doesn’t feel like it in your gut, probably, but that’s what the history books tell you.” 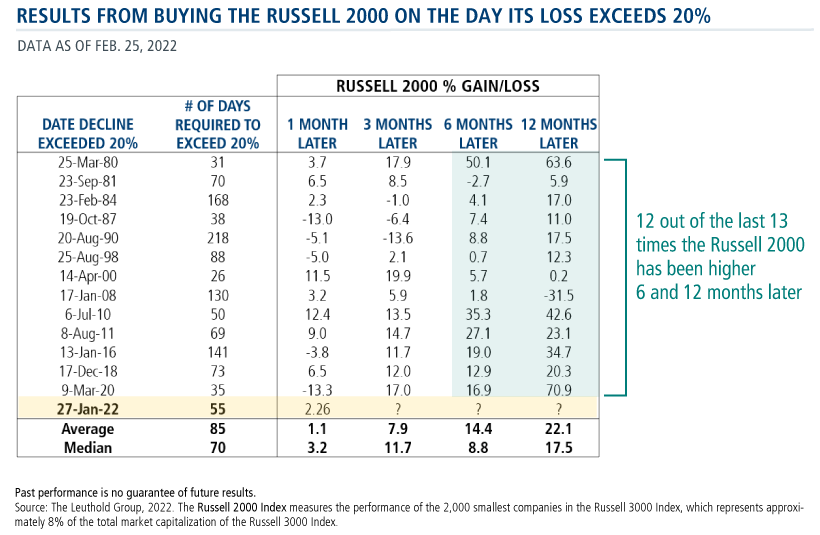 Adjustment on the Edges

“We’re going through a period where the market is almost solely focused on low valuations and it’s more or less yawning at the fundamental momentum components that we tend to succeed in finding,” said Nelson. “We’ve seen these periods before where the market puts less emphasis on the things we care the most about, but we power through.”

“I’ve never seen an environment where we didn’t get it back, in terms of relative performance and in terms of absolute performance,” he said. “To me, and to our team, this is an air pocket, but it’s nothing we haven’t seen before.”

When the VIX Has Been at Its Highest, Small Caps Have Led the Rebound

It’s been said that the more volatile the asset class, the worse the investor behavior. On their own, investors struggle to remain invested through the volatility. This table below illustrates why it’s in your clients’ best interests to stay put or, better yet, add: As the VIX climbs, so do future equity returns—for small caps, in particular.

CTSIX is known for its high growth style (see its style map), and there’s no wavering there, according to Nelson. “We’re staying in our small cap growth box, but we’re listening to what the market is telling us and we’re making some adjustments around the edges. At the margin, we’re caring a bit more about valuation as well.”

Examples include cutting back on exposure to fast growing companies that were earlier in their maturity. Nelson cited software companies as an example of companies that have been “slammed.”

“If you were trading at, let’s say, a P/E ratio of 28 times around Thanksgiving, you’re probably trading at about 20 times or maybe 21 times earnings right now, and that’s if your business has been on track. If you had problems and you’ve missed expectations, you’re trading at a much lower valuation, but just the re-rating has been severe. It’s been something to the tune of 30%.

“If your price-to-sales ratio was eight or nine times going into Thanksgiving,” he continued, “you’re probably five or six times right now. It’s nothing you did wrong as a company. It’s just the market with all the macro concerns that it has. It has decided to take everything down across the board, especially if you’re small cap, especially if you’re growth.”

The team continues to manage a portfolio with diversified sector exposures including healthcare, technology, consumer discretionary and several more.  Some new themes within the portfolio have emerged in recent weeks where valuations are low but the companies still offer fundamental momentum. For example, the portfolio now includes some oil services stocks, along with more exposure to commercial construction, casino equipment suppliers, and health care companies with exposure to rising elective procedures—all are areas that are seeing an incremental uptick in business.

“We’re active managers. We read the tea leaves. We look at what the market gives us, and what it cares the most about, and we make adjustments,” Nelson said.

Nelson also commented on small caps’ underperformance relative to large caps, a trend that has persisted for years.

“We’re currently in about the 17th percentile of where that relationship typically stands of small cap versus large cap valuations. Things are stretched to the downside and why that matters is that it can be a strong predictor of future performance. What tends to happen is when things are stretched this far, they do tend to mean revert,” Nelson said.

In price performance, too, he cited 100 years of data that suggested “the punch line is there’s an 84% chance that over the next five years small caps are going to outperform large caps by a magnitude of 8.1 percentage points per year. That’s a stunning statistic.” 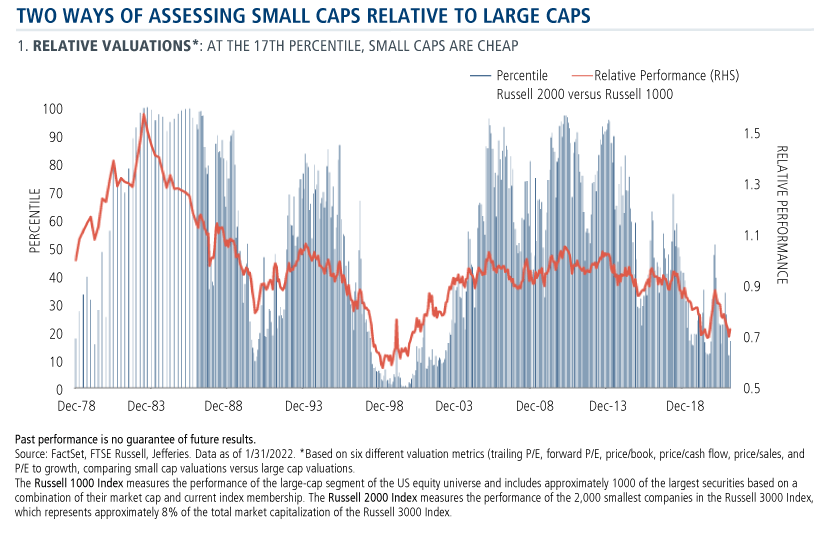 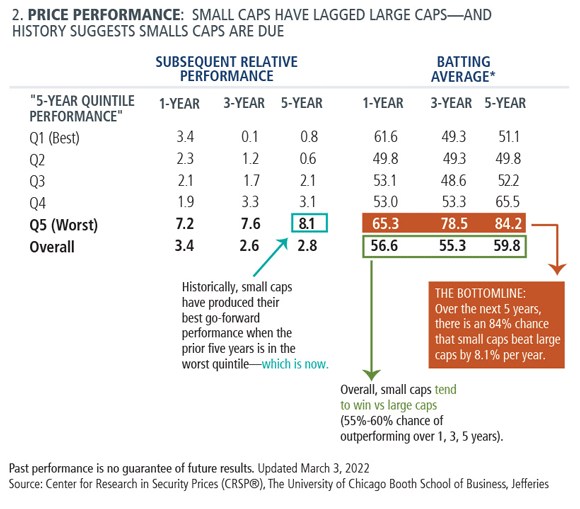 Further—and what Nelson described as a valuation anomaly—the CTSIX portfolio may be at an attractive entry point in particular.

“I say all that [about the strong fundamentals of the portfolio holdings] and here we are 33% off the NAV high in the mutual fund. But,” he said, “that’s part of what’s got me excited. The portfolio is on sale.”

“Valuations have just pulled back meaningfully for the asset class, for our portfolio. Our valuation, relative to the Russell 2000 Growth Index is almost the same, and that’s unusual,” according to Nelson.

Investment professionals, for more information about opportunities with CTSIX, contact your Calamos Investment Consultant at 888-571-2567 or caminfo@calamos.com.