Illustrating a proven record of enhanced returns and managed equity risk, Calamos Convertible Fund (CICVX) enjoyed a 14.04% return year-to-date through June 30 while the S&P 500 closed the first half of 2020 still in negative territory (-3.08%).

It was a period that Calamos believes once again demonstrated the value of active management as CICVX’s gain was nearly twice that of the ICE BofA All U.S. Convertibles Index (VXA0) (7.25%). 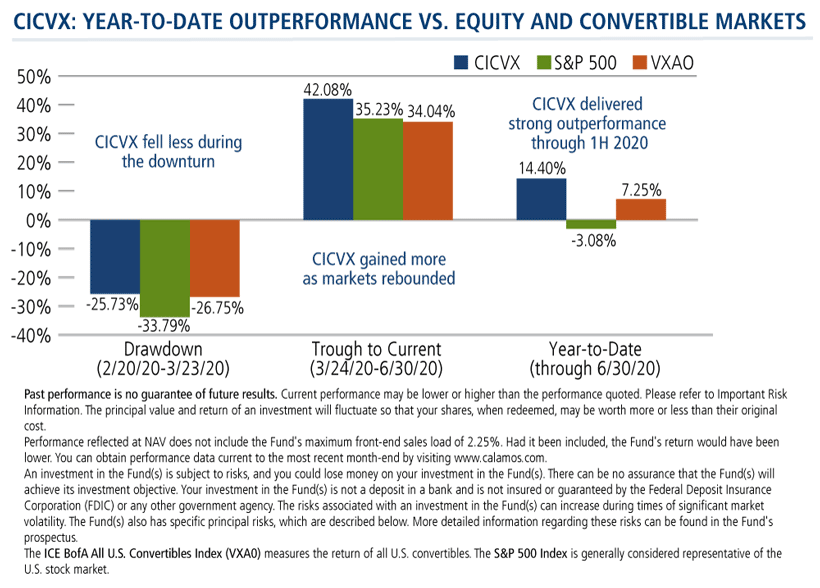 Investment professionals have relied on the fund to deliver strong performance in difficult markets over multiple cycles. In this Mid-Year Performance Update, Calamos Founder, Chairman and Global Chief Investment Officer John P. Calamos, Sr. comments on the fund, its prospects for the second half of the year and the convertible market in general. Download here.

For more information about CICVX, contact your Calamos Investment Consultant at 888-571-2567 or caminfo@calamos.com.

The principal risks of investing in the Calamos Convertible Fund include: convertible securities risk consisting of the potential for a decline in value during periods of rising interest rates and the risk of the borrower to miss payments, synthetic convertible instruments risk consisting of fluctuations inconsistent with a convertible security and the risk of components expiring worthless, foreign securities risk, equity securities risk, interest rate risk, credit risk, high yield risk, portfolio selection risk and liquidity risk. As a result of political or economic instability in foreign countries, there can be special risks associated with investing in foreign securities, including fluctuations in currency exchange rates, increased price volatility and difficulty obtaining information. In addition, emerging markets may present additional risk due to potential for greater economic and political instability in less developed countries.