Perspectives on Quality in the Energy Sector

“Show me the incentive, and I’ll show you the outcome.”
—Charlie Munger

Last year, we wrote about the improved outlook for traditional energy companies after several years of underinvestment created a supply deficit as global economies reopened (see, “As Global Economy Reopens, Green Policy Creates Pricing Power for Traditional Energy”). We discussed how the global focus on investing in renewable sources of energy coincided with the peak in oil and gas capex that occurred in 2014. The last boom for energy companies led to overproduction and a bust in oil prices as the price of West Texas Intermediate Crude fell from over $100 a barrel to less than $30 a barrel in early 2016. Deloitte LLP estimated that US energy companies lost $300 billion investing in shale from 2010 to 2019.

Since 2014, capex has declined over 50% as fundamentals deteriorated, the cost of capital rose, and ESG-focused investors pivoted toward renewable energy and eschewed funding debt and equity investments in traditional energy. Not surprisingly, against a backdrop of lower oil prices and production, the energy sector of the MSCI ACWI Index returned a cumulative -21.7% from 2015 through 2020 versus a total return of 80.0% for the index over the same period. Energy’s share of the ACWI Index weight has declined from a peak of 16% in 2008 to 5.2% at the end of May 2022.

Energy companies got the message. Capex budgets were cut, loss-making projects were scrapped, and the “growth at any cost” mindset was replaced by a focus on investing within cash flow generation, improving margins, and returning profits to shareholders (see Figure 2).

Fast forward to today, and energy has been the best performing sector in the MSCI ACWI year to date through June 22. The energy sector is up 15.9% versus -20.3% for the index as a whole. Investors are starting to pay attention to these fundamental improvements, which have been accelerated as Russia’s invasion of Ukraine pressures global supplies.

The recent rise in oil prices has highlighted that underinvestment in both upstream (exploration and production) and downstream (refining) could cause prices to remain higher for longer. For example, in 2021, global energy companies spent $244 billion in exploration and production, 28% below the five-year average before the pandemic, according to the EIA. Additionally, US refining capacity is down one million barrels a day (mpbd) from pre-pandemic levels to 17.9 mpbd. Additionally, global refining capacity fell by 730,000 barrels a day, the first decline in 30 years, according to the International Energy Agency. The number of barrels processed globally fell to 78 mbpd from an average of 82.1 mbpd pre-pandemic.

Source: Bernstein, Bob Brackett, “North American Oil and Gas Exploration/Production,” May 25, 2022, using company reports, Bernstein analysis, Bloomberg The production volume is an absolute measure and differs from quarter to quarter based on number of companies included in the calculations

Higher oil prices have been a boon to energy companies, leading to higher free cash flow and improving balance sheets. Free cash flow yields are expected to be more than 20% for many of the large global oil companies compared to a 20-year average of approximately 3.6%. Many oil companies are adopting a variable dividend policy based on level of earnings instead of a flat payout. Furthermore, the breakeven price of oil needed to cover capex and dividend commitments has come down substantially from $80 per barrel in 2015 to around $50 to $60 today.

4A. Enterprise value/debt-Adjusted cash flow and FCF yield over time 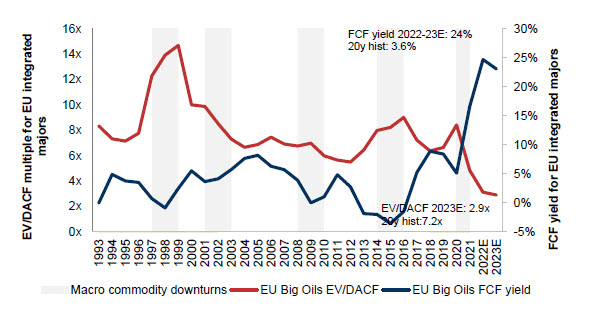 4B. Oil breakeven price required to cover capex and dividend commitments (US$ bil) 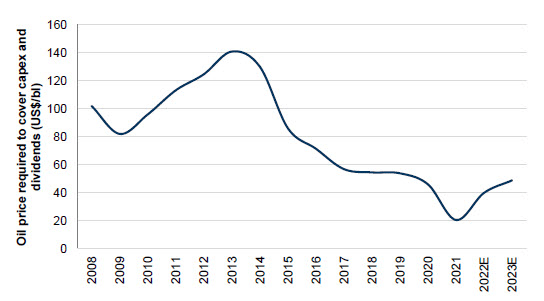 Although we expect fossil fuel consumption to decline in the coming decades, we believe there has been an over-estimation about how quickly the world can switch over to sustainable renewable energy. We typically see higher oil prices lead to higher investment in oil supply. However, in this environment, policy incentives across much of the world continue to focus primarily on increasing renewables supply rather than a more balanced and realistic approach. In some countries, the explicit policy objective has been to “put fossil fuel energy companies out of business,” which has disincentivized the necessary investment in reserves and refining capacity that could balance supply and demand over coming decades.

Near term, the biggest risk to rising oil prices is demand destruction from tightening global financial conditions and in turn, a slowing global economy. China’s continued “zero-Covid” policy-related lockdowns could weigh on global oil demand as well. But these potential risks would likely only further undermine the investment needed to balance supply with demand over the medium and long term.

We all know the risk of saying “this time is different,” and at some level of underlying oil and gas prices we would expect traditional investors to gain comfort with a capital allocation shift back toward greater investment in developing and producing reserves. ESG-focused investors may rationalize and support further investment as well, with recognition that energy security and avoiding reliance on less-friendly suppliers is as an important element of the transition toward a greater role of renewables. However, these capital expenditures would likely have higher rates of return than those experienced in previous cycles.  Alternatively, energy companies’ current capital discipline could prove durable if shareholder reluctance persists.  Either way, we believe investors may need to rethink their views on the sector and the degree to which it is “uninvestable” based on an outdated assessment of fundamental quality.

Indexes are unmanaged, do not include fees and expenses and are not available for direct investment. The MSCI ACWI Index measures the performance of developed and emerging market equities.