Green innovation or traditional hydrocarbons and commodities? When it comes to investment opportunities, our team often finds reasons to choose both, capitalizing on a combination of long-term themes and near-term disruptions. As our cyclicals team wrote in its December 2020 post, “Copper: Cyclical Winner in a Shift to a Greener World,” the materials sector has become an unlikely beneficiary of global green policies and investments in renewable energy infrastructure. Although green initiatives are meant to provide a cleaner source of global energy, they have driven significant near-term demand for “dirty” commodities like copper. This combination of increased demand and underinvestment in new supply resulted in improved prices and strong cash flows for many miners in areas such as copper and iron ore.

A similar dynamic is occurring today across the energy complex, and our team is seeking companies with strong pricing power that can benefit from a variety of tailwinds. Often, this means balancing near-term and long-term considerations—investing in both green and traditional energy. Jay Stewart and Mike Burke discuss the opportunities we are seeing today within the energy sector and how we are positioning portfolios to benefit from this disruption. —Nick Niziolek, CFA

Global energy prices spiked sharply in recent weeks due to unexpected shortfalls in inventories and production. As power demand continues to increase from the onset of COVID-19, power generation disruptions and a lack of infrastructure investment also have played a role in the recent surge. In recent years, the focus on climate change and CO2 reduction targets have led to a decommissioning of coal-fired power plants across Europe and a net reduction in energy capex globally. Thus far, new renewable capacity has struggled to fully replace the decline in stationary power.

Reducing carbon emissions is an important global secular theme, but the current infrastructure and technology are vulnerable to uncertain power generation (dependent on wind, solar, and water supplies) and volatile energy prices. In early October, UK spot natural gas prices spiked nearly fivefold this year, leading to higher electricity prices for the consumer. Due to the intermittent nature of renewable power, higher demand, and a reduction of coal- and gas-powered plants, European inventories are 25% below normal seasonal levels heading into winter heating season. In addition, lower wind speeds in early September led to 50% less power generation from some turbines versus five-year averages, and drier weather hindered hydropower production. Across Europe, this has meant a higher dependence on natural gas supplies from Russia. 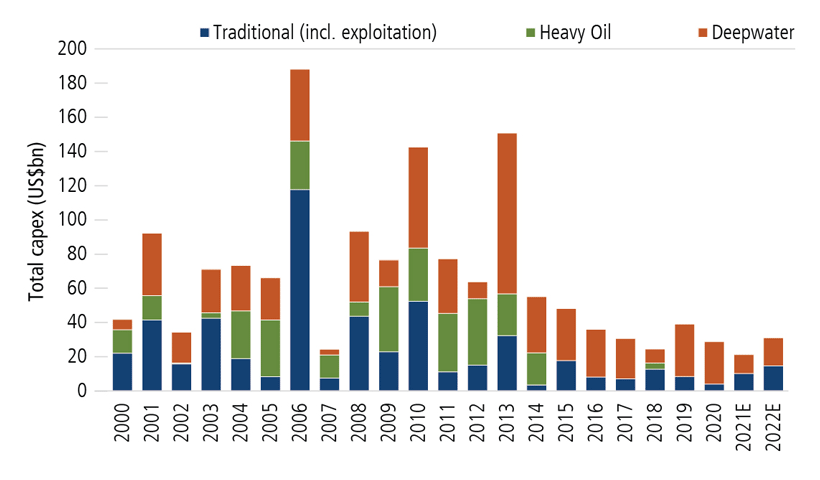 These power disruptions are not a European issue but a global one. In Brazil, hydropower production has lagged demand due to low water levels from drought conditions. Indian coal inventories have been depleted due to import restrictions and domestic capacity constraints. In China, stronger demand for Chinese exports has led to higher-than-expected energy consumption from Chinese manufacturers and reduced coal inventory. Power shortages have led to regional usage restrictions to help offset the impact of surging coal prices while also meeting China’s target CO2 emission targets.

China’s lack of inventory, however, is primarily self-inflicted. Over 60% of the country’s electricity is generated using coal-fired plants, but China has been reducing domestic coal production to meet emission targets and also has stopped imports from Australia due to a political dispute. This double whammy has sent coal usage surging 30% since the beginning of September. Prior to the ban on imported Australian coal, China imported 50 million metric tons per annum, and domestic production cannot fill the gap with August domestic production hitting its lowest level since May 2019. Overall imports were down 10% through the first eight months of 2021.

Along with low supplies of coal, Chinese power generators cannot pass higher input costs on to end-users because of government-mandated power prices. This could potentially cause liquidity issues for power generators and force them to curtail power output to large industrial customers in favor of residential customers. The Chinese government has recently ordered top state-owned energy companies—including coal, electricity, and oil—to secure supplies at all costs ahead of the upcoming winter heating season.

Policy decisions globally are leading to distortions in energy markets, and the shift to renewables isn’t without costs. A lack of adequate infrastructure investment and limited energy production has led to price volatility and supply uncertainty. The transition to a clean energy future will require additional investments in natural gas, oil, and coal to keep prices low while reducing outages and shortfalls. Further investments are needed to increase production capacity and energy storage, and to digitalize power grids to allow for better load management, monitoring, and maintenance.

After years of underperformance, the energy sector has more recently outperformed the overall index as commodity prices have risen. (The MSCI ACWI energy sector is up 34% year to date through September compared to the overall index’s gain of 12%). The Calamos Global Equity Team has opportunistically invested in beneficiaries of this disruption. We continue to see attractive potential in companies participating in the shift to renewables, but the near-term opportunity in companies more exposed to traditional hydrocarbons remains compelling. Our flexible approach allows our clients to benefit from both.

Past performance is no guarantee of future results. The MSCI ACWI measures the performance of developed and emerging market equities. Indexes are unmanaged, do not include fees or expenses and are not available for direct investment.