Mexico vs Brazil: A Tale of EM Have and Have-Nots

As our regular readers know, selectivity is an important tenet of our risk-managed approach to emerging markets. Especially in an environment of slower global growth and falling commodity prices, we expect a sustained divergence among the haves and have-nots, a divergence likely to be amplified by different economic reform trajectories.

Last year, we compared India and Brazil and received some feedback that it was too easy a contrast. So this time, we’ll compare Brazil and another Latin American energy producer, Mexico. We’re notably underweight Brazil and overweight Mexico. This positioning is supported by our team’s top-down and bottom-up research, including our discussions with the management teams of companies domiciled in each country.

In the past, I’ve been struck by the optimism of the management and investor relations teams of many Brazilian companies. More recently, conversations have centered on the headwinds Brazil is facing—headwinds that extend far beyond falling commodity prices. In my last set of meetings, for example, executives voiced frustration with economic conditions, government corruption and huge fiscal shortfalls that have led to a suspension of pay for federal and state employees in one Brazilian state, as well as declining access to key public services throughout the country. These conditions are fueling a brain drain as talented younger workers leave Brazil for better opportunities, including to the United States and Portugal. Against this backdrop, it comes as little surprise that consumption and business confidence are falling.

A change in government could be a turning point, and impeachment proceedings are underway against Brazilian President Dilma Rousseff. However, it is unclear how much momentum supports the process or what would happen if new leadership took the reins, especially as impeachment demands in Brazil seemed to accelerate only after President Rousseff began pushing forward more austerity measures, which we believe are needed. Exports could get a boost from Brazil’s weak currency but that’s unlikely to be enough to offset the economic problems and brain drain the country is facing, at least not over the near term.

In contrast, we see a more favorable landscape for companies in Mexico and believe positive momentum can continue through 2016, supported by favorable trends in a variety of economic freedoms. Figure 1 compares Mexico and Brazil based on their scores on several criteria, as measured by the Heritage Foundation.

Figure 1. By Many Measures, Mexico is Moving in the Right Direction, Brazil is Not 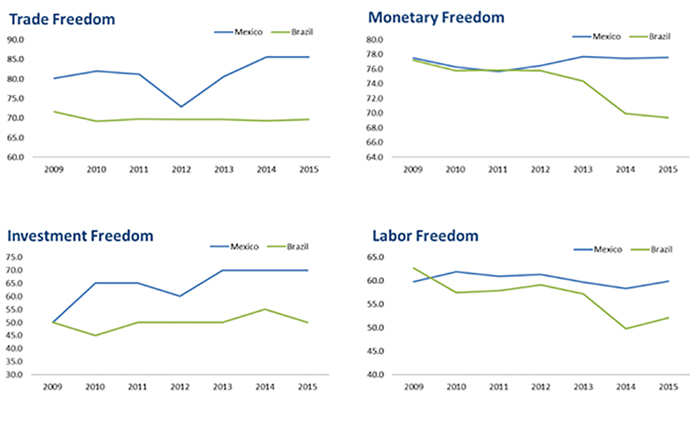 Also, although Mexico also has a twin deficit (current account deficit and fiscal deficit), it is improving, while Brazil’s twin deficit now exceeds more than 10% of its GDP (Figure 2). Falling commodity prices are not a positive for Mexico, but the government has been proactive in hedging its oil revenues, which provides support for fiscal spending. We also saw stronger-than-expected consumer activity during the second half of 2015. Remittances from Mexicans working in the U.S. have been robust, benefitting from a weak peso and the country’s close ties to the improving U.S. economy. The industrial sector is also adding more jobs, with increased “re-shoring” activity in the auto and aerospace industries.

Figure 2. Twin Deficits as a % of GDP

In closing, we believe there are many factors supporting our relatively more bullish case for Mexico, and a cautious stance on Brazil. However, given the volatility in the markets, we are monitoring top-down conditions and bottom-up fundamentals with added scrutiny. We continue to believe that the emerging markets offer attractive long-term growth opportunities … if you know where to look.

Heritage Foundation Measures of Economic Freedoms: Trade freedom measures the extent of tariff and non-tariff barberries that impact imports and exports of goods and services. Monetary freedom combines a measure of price stability with an assessment of price controls. Investment freedom evaluates a variety of regulatory restrictions typically imposed on investment. Labor freedom is quantitative measure that considers various aspects of the legal and regulatory framework of a country’s labor market. (Source: http://www.heritage.org/index/book/methodology)