India vs. Brazil: A Contrast in Fundamentals

A comparison between India and Brazil highlights the importance of a selective approach to emerging markets. In the early 1990s, India and Brazil both rose to prominence alongside China and Russia as members of the “BRIC” group. More recently, the two countries have taken divergent paths. Both countries benefit from favorable demographics, but while India has recently focused on positive economic reforms and prudent fiscal policy, Brazil has lacked the political will to address structural issues in its economy. As commodity prices continue to decline, Brazil’s economy has struggled given the country’s heavy reliance on commodity exports. In contrast, India, a commodity-consumer, has reaped benefits from lower commodity prices due to its increased reliance on imports. These differences have contributed to a divergence in monetary policies as well as equity and currency market returns.

The Reserve Bank of India recently announced a 50 basis point cut in its repo rate (the rate at which the Reserve Bank of India lends money to commercial banks). This larger-than-expected cut illustrates India’s confidence in inflation remaining subdued and the country’s ability to maintain accommodative monetary policy as global growth struggles. While India will not be immune to a global slowdown, the progress it has made in reducing its current account and fiscal deficits as well as in containing its inflation rate has decreased its vulnerability relative to other emerging markets (Figure 1). With economic growth momentum improving over the previous two years, optimism around new leadership, and the potential for positive reforms, India looks better positioned to attract and retain capital despite recent volatility in the emerging markets. Looking forward, subdued inflationary pressure should permit more accommodative monetary policy to continue while an improved fiscal situation can provide additional flexibility to support growth. 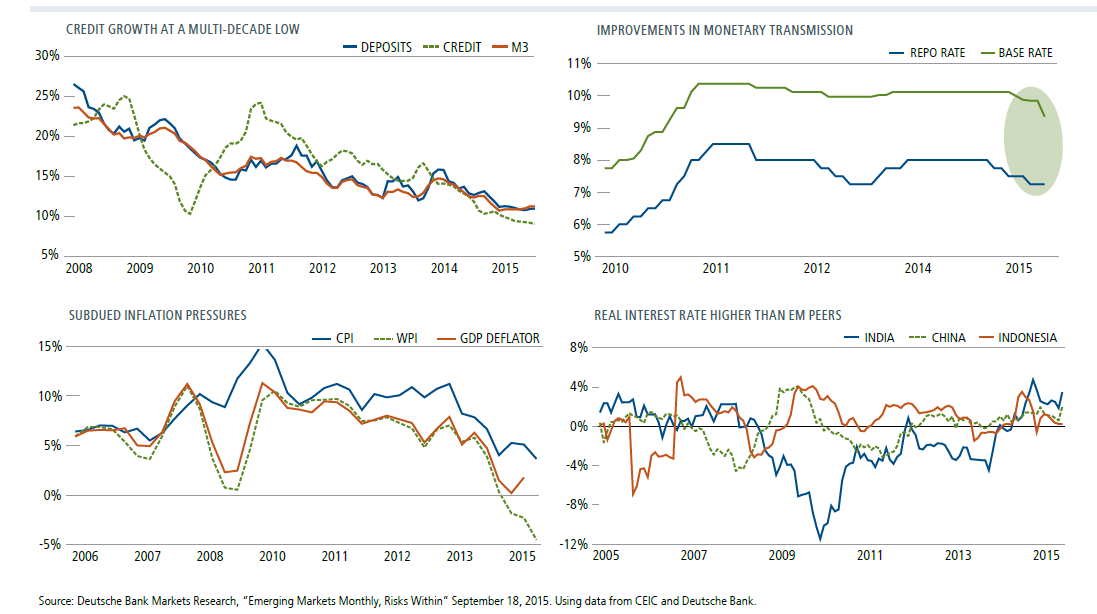 Brazil, on the other hand is the poster child for dysfunction within developing economies. During the commodity super-cycle of the previous decade, Brazil enjoyed strong economic growth tied to commodity exports, which resulted in a strong currency that also crowded out non-commodity exporters. The Brazilian government was lax on policy and significantly overspent on welfare programs. Over the past few years, the mistakes of the previous decade have come home to roost, as weak commodity prices have hurt Brazil’s fiscal situation and growth prospects. As a result, capital has moved out of the country. The near-term prospects are not much brighter, as the economy contracts under weaker domestic spending and the banking sector tries to manage through a credit bubble (Figure 2). Brazil is in a slightly better position than it was during the 1980s commodity collapse, as much of the country’s debt is locally denominated, rather than dollar denominated. The depreciation of the Brazilian real, which has fallen nearly 43% versus the U.S. dollar since the beginning of 2014, should ultimately provide a tailwind for non-commodity exporters and improve Brazil’s current account deficits, but this will be a multi-year process that requires structural changes within the Brazilian economy to have a sustainable impact on longer-term growth prospects.

The Wholesale Price Index (WPI) is a measure of inflation that represents prices of goods prior to the retail level.