Supported by a sweeping economic reform agenda, demographic trends, and improving economic fundamentals, India remains one of our favorite growth stories in the emerging markets. We viewed the market sell-off that followed the country’s surprise move to demonetize its currency in November as a buying opportunity. (Read our post on demonetization.)

After a difficult 2016, Indian equities have staged a solid rebound in 2017, rising 15.0% year-to-date through March 15. This gain surpasses both the MSCI Emerging Market Index, up 9.6%, and the MSCI World Index, up 6.4%. As our team considers India’s prospects from here, we see many reasons for optimism. As we assessed the potential impacts of demonetization, we identified several guideposts that would be key determinants of India’s economic growth trajectory. These included the political backdrop, corporate earnings results and fundamental economic data. As we move through 2017, each of these guideposts points in an encouraging direction.

1. Regional election results suggest that Prime Minister Modi and his reform agenda remain popular. Prime Minister Modi’s ability to advance economic reforms is a cornerstone of India’s growth story. When the Indian government demonetized its currency in a bid to root out corruption, strengthen the country’s financial system, and promote credit growth (see our post), the surprise move caused turmoil across India’s largely cash-based economy. As commerce slowed and bank lines snaked on, speculation grew that Modi’s popularity would erode and stall reform momentum. However, Modi’s popularity seems to be intact. Earlier this month, his Bharatiya Janata Party (BJP) won a majority in the key battleground state of Uttar Pradesh—an election that many viewed as a referendum on Modi’s and the BJP’s prospects for re-election in 2019.


2. Corporate earnings have shown resilience. While many companies did fall short of expectations, the most recent round of quarterly earnings announcements has been better than many anticipated. Not unexpectedly, consumer activity slowed in the wake of demonetization, taking a toll on consumption-driven companies. Even so, there was good margin expansion in a variety of other industries, including those tied to infrastructure buildout—a focal point of Modi’s economic agenda. As the chart below shows, profits after taxes (PAT) for India’s blue chip Nifty Fifty rose for the quarter.

3. Economic data already points to a post-demonetization consumption rebound. In the days and weeks following demonetization, concerns grew about the longer-term effects of the transition. However, in our recent conversations with company management teams, we’ve heard many reports of a quick resumption in demand. For example, monthly sales volumes for passenger vehicles, two-wheelers, and commercial trucks support our view that many of the headwinds caused by demonetization would be short lived. By late November, dealer traffic was already improving, and better sales volumes in January and February further confirmed the recovery in sales. 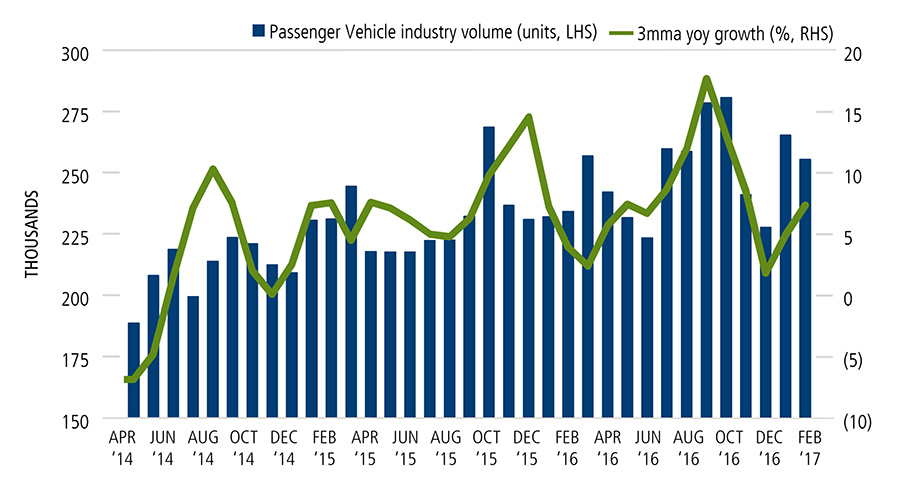 
Conclusion
Fueled by a range of economic reforms, India provides one of the most compelling backdrops for growth and investment opportunity. Looking through the shorter-term noise of 2016, we used the downturn in India’s equity market to build positions in our favored names, at attractive valuations. Within our global, international, and emerging market strategies, we remain overweight to India—an active decision to take advantage of the improving conditions we see. We are finding opportunities in both core growth and cyclical opportunities, spanning the financials, industrials, discretionary and technology sectors.