The Big Opportunity in European Ecommerce

Ecommerce has long been a key growth theme in the Calamos global and international portfolios. But as with any theme, targeting the most compelling opportunities requires a nuanced perspective, as broad themes play out differently across regions at a given point in time. As it relates to ecommerce, we believe Europe represents a largely overlooked opportunity. Structural shifts, a longer runway for growth, and accelerated global demand for ecommerce due to the pandemic provide powerful tailwinds for select European companies.

When most people think of ecommerce, they think of U.S. and Chinese champions like Amazon and Alibaba. European companies aren’t likely to come to mind. There are arguably several reasons for the lack of a European champion, but the key one is the more fragmented market environment, which is largely attributable to underlying differences in language, culture, and regulations. In most major EU countries, less than 50% of online purchases are from sellers in other EU countries, which is not meaningfully higher than purchases from sellers outside the EU. As a result of this fragmentation, it has been more difficult for European ecommerce players to consolidate their home markets and develop the scale and network advantages necessary to compete more effectively, on the regional or global stage.

The Case for Outsized Growth Potential

The EU is currently the second largest economy in the world with a GDP of more than $18 trillion and a population of more than 500 million.1 Europe should be well positioned for outsized growth given its above-average wealth (approximately $36,000 GDP per capita) and internet penetration (82%). We believe the opportunities are particularly strong for companies focused on Western and Northern Europe, which account for about 60% of the EU population and boast even higher GDP per capita (about $48,500–$54,500) and internet penetration (above 92%). 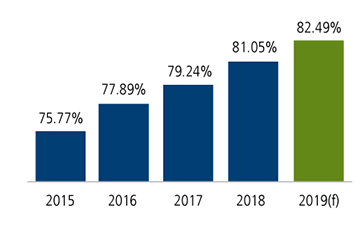 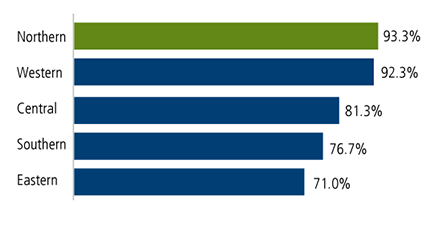 EU leadership is working to address the structural limitations that have historically contributed to lower ecommerce penetration and the more fragmented market environment in Europe. To drive increased ecommerce penetration and thus continued outsized growth, the EU must remain committed to investing in the necessary underlying technology, infrastructure and consumer education. And to foster an environment where domestic companies can consolidate the market and develop into EU champions, the EU must work toward a single digital market. This would include harmonized standards and regulations to better foster cross-border transactions and better enforcement to ensure that non-EU companies operating in the EU to don’t have an unfair advantage.  This will take time, but we believe EU leadership recognizes the economic benefits and will work together to get this right.

Our Approach to Europe’s Ecommerce Opportunity

The combination of strong underlying ecommerce growth and the likelihood of increased market consolidation have created attractive investment opportunities in Europe, both now and over the longer term. Our focus will continue to be on identifying innovative ecommerce companies that are finding ways to consolidate the European market and to develop competitive moats that will allow them to go head-to-head with other global champions.

For more on our views, see our team’s blog posts.

As a result of political or economic instability in foreign countries, there can be special risks associated with investing in foreign securities, including fluctuations in currency exchange rates, increased price volatility and difficulty obtaining information.