Credit spreads have widened dramatically, equities have declined significantly, and convertible valuations have cheapened. A reversal in any one of these factors could provide a tailwind to convertibles, and if all three reverse, convertibles may be poised for a potentially powerful “trifecta.”

Since then, the U.S. convertible securities market has come back strong. The BofA Merrill Lynch All U.S. Convertibles Index (VXA0) is up 20.31% since the February 11 low through August 15, performing much in line with the S&P 500 Index, up 21.08%. Revisiting each of the three factors of our trifecta, what we expected to see has begun to occur: 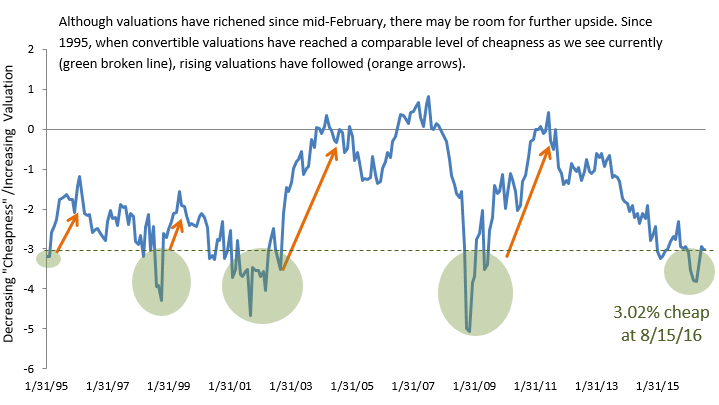 Past performance is no guarantee of future results. Source: BofA Merrill Lynch. The % cheap measure is based on constituents in the VXA0.

Although the convertible market has improved from February lows, we see continued opportunities for active and selective managers. In regard to our trifecta:

In a slowly growing economy where financial markets are likely to remain volatile, we believe convertible securities can provide the opportunity to capture equity upside with potentially less downside. However, given the appreciation that we have seen over recent months in the asset class—and the economic and market choppiness we expect to continue—we could well see greater disparity in returns, highlighting the need for an active approach to security selection and portfolio construction.

Past performance is no guarantee of future results. The BofA Merrill Lynch All U.S. Convertible Index is considered generally representative of the U.S. convertible market. Indexes are unmanaged, do not entail fees or expenses and are not available for direct investment.
The opinions referenced are as of the date of publication and are subject to change due to changes in the market or economic conditions and may not necessarily come to pass. Information contained herein is for informational purposes only and should not be considered investment advice.
The information in this report should not be considered a recommendation to purchase or sell any particular security.
Convertible securities entail default risk and interest rate risk. Investments in high-yield securities include interest rate risk and credit risk.