Rise of the Robots: An Investment Opportunity Centered on Japan

In our global and international strategies, we combine bottom-up fundamental analysis with our top-down identification of secular growth themes, such as the growth of a global middle class, or demand for automation and artificial intelligence. Investing alongside long-term trends provides many benefits—companies tied to secular themes offer exciting growth potential, and they also tend to be more resilient to short-term economic downturns. In a new series of posts, our team will share their views on key secular themes and how our teams are capitalizing on them globally.

In this post, we begin by taking a look at automation and more specifically, robotics. Robots have been around for decades, but as global competition ramps up exponentially, demand has grown for technological innovations that enhance efficiencies and productivity (Figure 1). Companies have capitalized on this trend by developing increasingly sophisticated robots—for example, machines that include vision and sensor features, welding attachments or laser capabilities.

Figure 1. Robots Are Taking Over the World Robot density in automotive sector and overall manufacturing (number of robots per 10,000 workers)

When people think of robots, industrial robots may be the first to come to mind. These are the large machines that work in coordination on auto production lines. However, robots are enhancing efficiencies in many ways, and take many forms. A new generation of robots, collaborative robots, are designed with smaller payload capabilities to handle less strenuous tasks and can operate safely alongside workers.

Although autos and electronics currently make up about two-thirds of automation usage, demand is growing in aerospace, pharmaceuticals, food/beverage and other light assembly industries. Across industries, companies are using robots to reduce labor costs and operate longer with reduced human oversight. Robots are also helping companies achieve consistent quality and reduce the probability of contamination—a vital consideration in the pharmaceuticals and food and beverage industries.

Global economic development and particularly the maturation of the Chinese economy extends the runway for automation growth and the opportunities for robotics leaders. While automation is often thought of as a developed market trend, growth is actually strongest in China. Figure 2 illustrates the expansion of industrial robot usage in China. We expect Chinese demand for robots will continue to grow rapidly as wages rise, auto production expands, and new facilities are built with higher levels of automation. 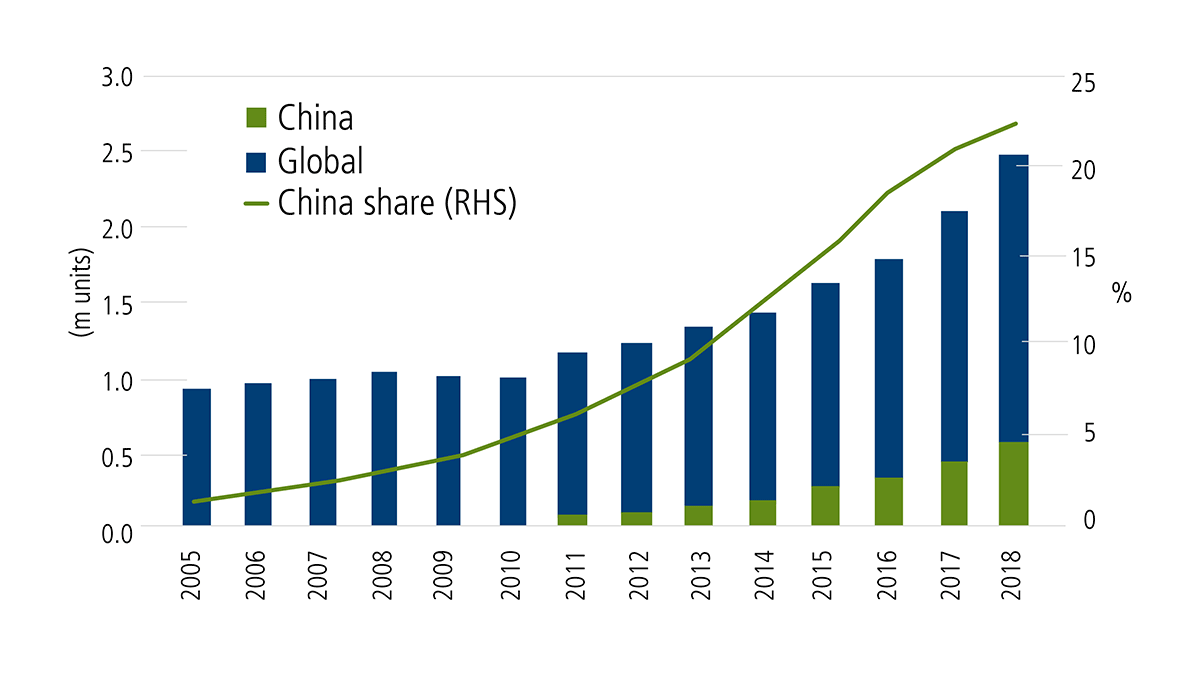 When it comes to automation, Japan has established itself as a global powerhouse. For example, none of the top 10 industrial robot makers (based on market share) is based in the United States. Within this top 10, Japanese companies dominate, with 5 companies representing 59% of the pie (Figure 3). Japan also enjoys leadership positions in many other components used in automation, such as linear guides, reduction gears and servomotors.

Several factors solidified over decades have contributed to Japanese dominance in automation. Among them, Japan was committed to building out its engineering prowess coming out of World War II. Demographics also have played a big role, as Japan has sought to address the economic challenges of its aging population and low birth rates, which have been compounded by a conservative approach to encouraging immigration. A smaller domestic workforce increased the incentives for Japan to embrace automation solutions. Additionally, up until quite recently, return on capital was less of a focus for Japanese companies. As a result, auto manufacturers were able to invest in robots while also keeping employees on the payroll.

Japan’s technology and engineering capabilities combined with demographic forces help set the stage for the country to become a global leader in robotics and automation. Having invested heavily over the decades in robot development, many Japanese companies now enjoy a wide moat, which will be hard for newer entrants to surmount. Japan’s expertise in robotics highlights the benefits of a global approach to growth, as a U.S.-only strategy would be hamstrung in terms of securing exposure to this far-reaching trend.