Today’s post continues our series on how economic reforms provide catalysts for growth in emerging markets, such as India and Thailand. Below, we consider Indonesia, where a tax amnesty program, cabinet reshuffle, and a range of other reform policies create tailwinds for growth.

Over recent years, policies targeting housing and infrastructure investment have strengthened the economy while rural initiatives designed to boost farmer incomes and productivity have contributed to improved regional consumption trends.

As in India and the Philippines, changes in tax policies are also supporting economic growth and investment opportunities. Indonesia’s recently enacted tax amnesty bill incentivizes people to own up to tax debts and move money back into the country. Under this amnesty plan, which runs through March of 2017, funds that are declared but remain offshore are subject to a higher levy than money that is brought back into the Indonesian economy for a period of at least three years. Repatriated funds can be used as collateral for a mortgage or invested in REITs, providing a potential boost to the real estate market, or invested in government bonds or bonds issued by state-owned enterprises.

Figure 1. Economic Reforms Have Boosted Indonesia’s Real Estate Market
The JSX Property Index measures the prices for property and real estate companies listed on the Jakarta Stock Exchange. The index has seen considerable appreciation over recent years, supported by easing restrictions, and interest rate cuts have encouraged mortgage activity. The implementation of the tax amnesty plan may provide additional fuel to this trend, with a positive knock-on effect for the entire economy.

Recent cabinet appointments may further the reform momentum. President Joko Widodo’s (“Jokowi”) July cabinet reshuffle included the appointment of Sri Mulyani Indrawati as Finance Minister. She has a strong history of reform implementation and policy execution, having served as finance minister from 2005 to 2010, and she may prove a leader in developing strategies to improve the country’s fiscal deficit situation and overseeing the execution for the tax amnesty plan. The cabinet reshuffle also suggests that President Jokowi has built material political capital as he approaches his second anniversary as president and that he is positioned to more effectively implement the reform platform on which he campaigned. His approval rating has also trended up (Figure 2), which indicates support for his reform agenda. 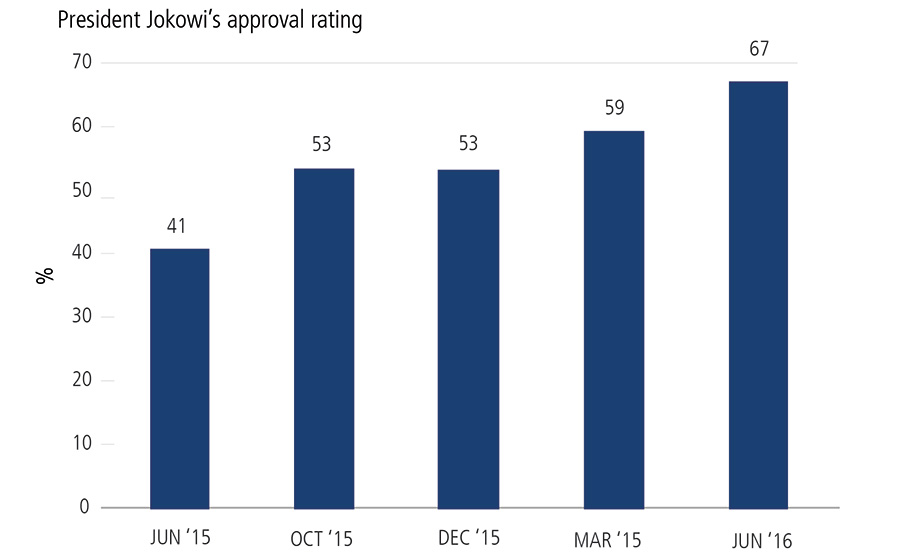 Policies to support housing and infrastructure investment remain a focal point of the administration, while monetary policy is on an easing trend. Additionally, Indonesia has lessened restrictions on foreign ownership of businesses, including equity ownership, which has led to increased foreign asset flows into the country (Figure 3). 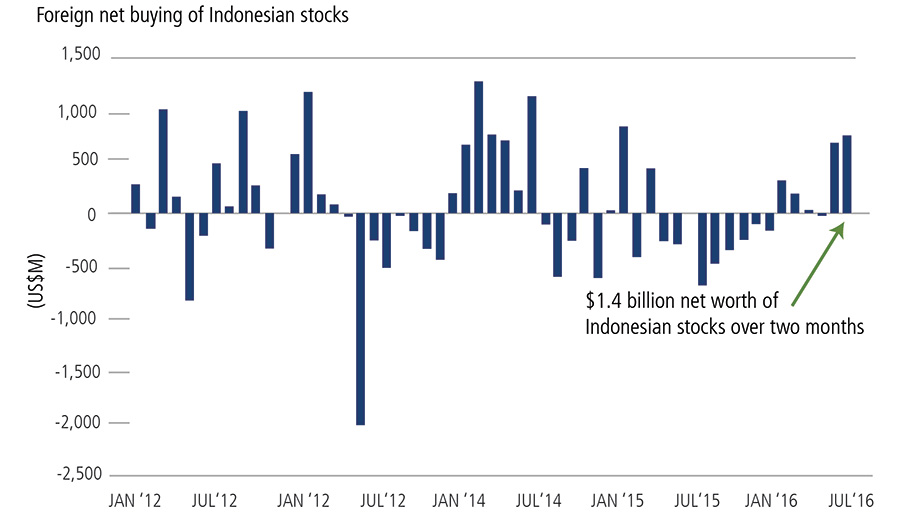 Participating in Indonesia’s Growth Potential
Our Global Equity Team has identified opportunities tied to strengthening trends in consumption, real estate and infrastructure, including:

Conclusion
Indonesia’s reform initiatives are showing strong momentum and a breadth of policy effects. With efforts targeted across the population—e.g., the tax amnesty program for more affluent segments and rural initiatives for less prosperous segments—the country provides a diverse set of investment opportunities.