Over recent months, the Calamos fixed income team shared its expectation that inflation would be a transient, temporary phenomenon related to the reopening of the domestic service economy and low base effects from stagnant price growth in 2020.  We have long acknowledged the long-term disinflationary forces at play in the global economy, namely demographics and technology advancement. However, as economic reopening has progressed and temporary supply disruptions have become more pervasive, we are adjusting our stance on inflation to incorporate above-trend, above-target inflation that will persist over the next two years, and potentially longer.

Earlier this year, our inflation outlook was heavily influenced by the fact that three areas of the economy—used autos, airfares, and hotel accommodations—were driving outsized inflation.

As you can see below, those components of the economy represented more than half of the spike that has driven year-over-year core numbers to 4% and higher.  Those impacts appear to have rolled off (including a contraction in prices of each in August). 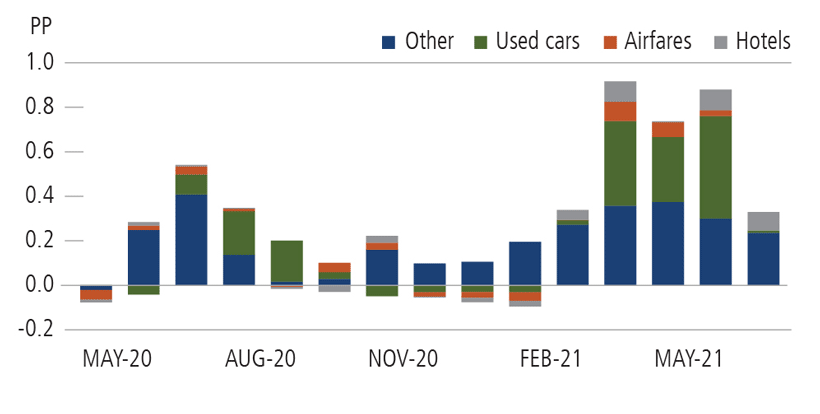 Given this roll off, why are we revising our expectation? Two macroeconomic developments have prompted us to update our view. The first is the material move higher in shelter expenses, such as rent.  At 40+%, shelter is the largest contribution to broad inflation measures. Its impact on inflation data is smoothed to some degree because the measurement encompasses the previous six months’ price changes. This smoothing means that when there are large price movements in either direction, it can take a few months for those rapid changes to be fully reflected in CPI measures, and we believe we are experiencing one of those environments now.

The second factor is wage inflation that is proving to be stickier than we had anticipated. The supply of available labor is not meeting the demand, even in states where the Federal supplemental unemployment benefit has ended. Job openings continue to increase and now total nearly 11 million. Employers are offering increasingly higher wages to lure people back to the workforce, and after several years with year-over-year earnings trending between 2% to 3%, the measure has now spent most of 2020 and 2021 at or over 4%. Wage inflation is generally a stickier form of inflation as companies raise the prices of goods and services to meet higher labor costs. It also tends to be more palatable for the Fed and politicians.

Although the correlation between interest rates and inflation has been strongly positive historically, we have not seen the higher realized inflation of the past six months materialize into higher interest rates. Technical aspects of the current market environment, including quantitative easing and foreign demand, are acting to keep a move to higher rates in check. Fundamentally, the market is pricing in a substantive probability that neutral rates in future economic cycles will be lower than in the past. Regardless of the driver, real interest rates have been negative through the entirety of the Covid pandemic, and that is not an issue that we expect to change in the foreseeable future.

Where could we be wrong?  A resurgence of Covid, an international economic or event-driven shock, or uncertainty around next fall’s midterm elections could interrupt economic recovery and weaken pricing power, causing inflation to wane. However, we see this as a less likely scenario. Instead, persistently higher inflation in shelter and wages is likely to drive price inflation over the next two years.

After years of persistently low inflation, the prospect of more inflation for longer may be unsettling for some investors, but it’s important to take a step back. Inflation may make conditions more challenging, but there are opportunities in all environments—especially for active managers with large toolkits. It’s important to note that higher inflation has not yet resulted in significantly higher nominal interest rates.  While we are maintaining a cautious stance on portfolio durations, we do not anticipate drastically higher rates as a result of above-trend inflation.

Opinions, estimates, forecasts, and statements of financial market trends that are based on current market conditions constitute our judgment and are subject to change without notice. The views and strategies described may not be appropriate for all investors. References to specific securities, asset classes and financial markets are for illustrative purposes only and are not intended to be, and should not be interpreted as, recommendations. The Consumer Price Index is a measure of inflation.