Geopolitical tensions are causing many nations to reassess their defense capabilities and readiness. Following years of peace in Europe, defense spending has been an afterthought for many countries, and budgets stagnated. Many NATO member countries have been undershooting the agreed-upon target of 2% of GDP.

Defense budget as a % of GDP
Among NATO countries, only the US, UK, and France currently spend more than 2% of GDP on defense

Given Russia’s invasion of Ukraine, this is all changing. Germany announced a €100 billion fund to improve military preparedness and will increase its annual spending to the agreed target, up from 1.3% in recent years. Other European nations, including the Netherlands, Poland, Denmark, Sweden, Romania and Latvia, have stated their intentions to increase spending. Furthermore, Sweden and Finland have announced plans to apply for NATO membership. 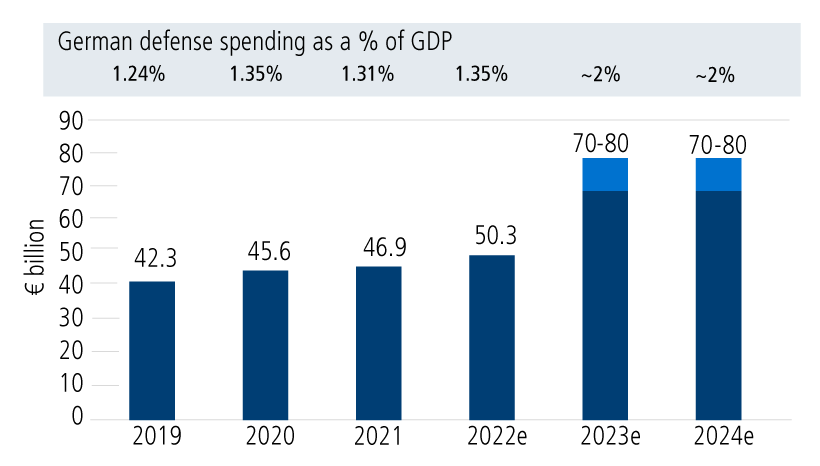 Although Europe remains the focal point for the improved outlook in defense spending, an increased emphasis on military readiness will likely play out globally. The implications of this shift are significant. If European NATO members increased defense spending to 2% of GDP, the annual spend across Europe would increase by approximately 25% or about $75 billion to $375 billion.

We see three primary reasons for the recent outperformance in European defense stocks:

Clarity around multiyear spending plans across Europe should provide a tailwind to fundamentals in the years to come. We believe the recent re-rating of defense stock valuations relative to the overall index should prove sustainable as defense companies offer an attractive combination of undemanding valuations, accelerating fundamentals, and solid visibility for demand. We expect to see additional positive earnings revisions over the next 12 to 24 months as NATO countries finalize forward defense budgets.

As defense spending continues to increase globally for the foreseeable future, particularly in Europe, our Global Equity Team sees a long-term opportunity to participate in this growth. We expect nations around the world to reassess their budgets because of the Russian invasion of Ukraine. Near-term spending will focus on military preparedness, but we believe longer-term investments in research and development, technology upgrades, and procurement will be additional catalysts that will remain supportive for defense industry fundamentals. The stability in outlook should boost revenue growth, margins, and cash flows across the industry and make the defense industry a compelling area of opportunity in an uncertain world.

Indexes are not actively managed, do not include fees or expenses and are not available for direct investment. The STOXX 600 Index is a measure of European stock performance.