Many of our emerging market posts focus on global top-down developments and macroeconomic shifts, as these provide tailwinds or headwinds to companies around the world. Equally important to our research process is our identification of long-term secular themes that may help sustain a company’s prospects, in spite of more challenging economic conditions. One growth theme we have focused on for many years is the growth of automation. Below, our Non-U.S. Industrial Sector Head Paul Ryndak shares his thoughts on future opportunities in automation, drawing on insights from his recent travels to Japan and China.
–Nick Niziolek, SVP and Co-Portfolio Manager

One of the investment themes we are most excited about is automation. The days of Henry Ford’s assembly line are long gone, replaced by automated conveyor systems and robots that do much of the heavy lifting, including welding, painting, lifting and gluing windshields onto the car. We believe a number of factors will support the future growth prospects for automation companies, including the rapid expansion of automation within emerging economies, specifically China.

Recently, I met with the management teams of several automation companies in Japan and one consistent theme they discussed was the opportunity for growth in China. Later that week, I visited three automotive production facilities in China with outstanding degrees of automation.

We believe that China will continue to seek out automation solutions as a way to enhance profitability and global competiveness. The tremendous growth of the Chinese auto industry has led many auto manufacturers to build new production facilities with teams of robots and other highly advanced automation features.

There are many other reasons that companies in China are seeking opportunities to automate. Labor costs are rising quickly, providing incentive for manufacturers to be more productive and contain costs. Also, the technical and quality requirements for manufacturing cars, phones and other electronics is increasing, requiring more precision. This precision can be more readily accomplished with automated processes and equipment.

When people think of automation, robotics typically comes to mind. This isn’t surprising, given the increasingly important role that robotics play, not only in auto manufacturing but also in a range of other industries, such as component manufacturers. We believe the expanded use of robots provides significant investment opportunity for automation companies, especially those with business strategies focused on China. At only 213 robots per 10,000 employees, the robot density in China’s automotive manufacturing sector is low, compared to 1091 in the U.S. and 1562 in Japan. 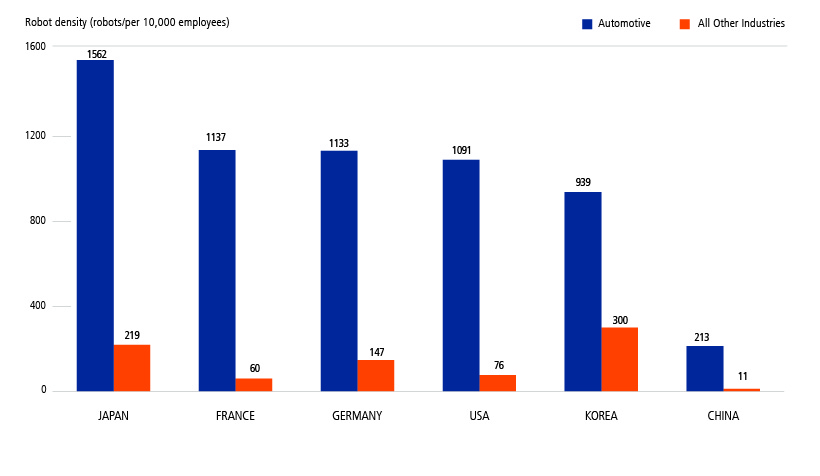 
In both China and the developed markets, we believe the expansion of collaborative robots is one of the most promising areas of growth within robotics. Unlike industrial robots (such as those that are typically used in auto plants) that need to be contained and separated from humans for worker safety, collaborative robots have features such as sensor-based systems that allow them to work safely next to humans. The continued development of collaborative robots provides exciting applications in light manufacturing and assembly processes, and further expands the market opportunity for robot manufacturers.

Our investment approach marries our identification of secular growth themes with comprehensive fundamental research. In the case of automation companies, the pullback in Japanese equities earlier this year brought the valuations of select companies to attractive levels that do not fully reflect the long-term growth potential we see.


The opinions referenced are as of the date of publication and are subject to change due to changes in the market or economic conditions and may not necessarily come to pass. Information contained herein is for informational purposes only and should not be considered investment advice.