Perspectives on the Philippines

Those familiar with Calamos know that our approach to emerging markets (EM)is active and focused on countries that are moving in a favorable direction in regard to economic freedoms. In my last post, I wrote about our team's constructive outlook on Mexico, where investor optimism about a broad package of reforms has helped drive an equity rally. Our longer-term outlook on the Philippines is also positive. Among the favorable trends, President Aquino has reduced corruption during the first four years of his term, which has benefited infrastructure improvement efforts by reducing funding leakage and fostering a more attractive investment environment. This is especially important for the Philippines as foreign direct investment is presently the lowest in the region.

The Philippines market finished 2013 with a positive return, but it was a volatile year as the index traded off nearly 20% as EMs sold off in May and June on taper concerns. After recovering more than half of these losses during the outset of the second half of 2013, the market experienced another downward leg following Typhoon Haiyan in early November. The humanitarian impact has been severe, and we expect food inflation likely to remain elevated for several quarters and GDP growth to be temporarily impaired.

However, we expect the economic impact to be short-lived. Also, many Philippine-listed equities tied more closely to Manila and Cebu, which escaped the brunt of the typhoon's impact. October remittances were reported at a record $2.06 billion, with the Central Bank expecting surging November and December remittances as friends and family providing support following the typhoon. This is positive for both consumption and recovery following this disaster. Moreover, demographics provide a tailwind to the country's economic growth prospects. With a well-educated population that includes many English speakers, the business process outsourcing industry in the Philippines has grown rapidly, and is now larger than that of India's. 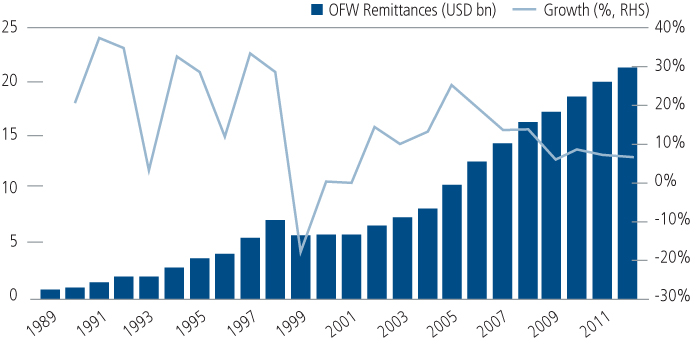 When we visited Manila in the third quarter of 2013, business leaders voiced consistent concerns about the need for infrastructure improvements to sustain the country's economic growth; among them, they felt that the momentum that President Aquino had realized early in his six-year term was waning. In recent weeks, we've seen developments that point to an increased commitment to infrastructure spending. In particular, there's been a ramp-up in public-private partnership (PPP) grant award activity. PPPs are business ventures between a public sector and private sector entity. PPPs represent one of the ways that a government can give a larger role to private businesses, to mutual benefit. In the case of the Philippines, the PPP projects in the pipeline run the gamut from building better roads and schools, modernizing of health care facilities and improving airports and power supply. These projects bring both short-term benefits (jobs) as well as longer-term ones (promoting education, commerce and longevity).

The Philippines government has set its sights on awarding 15 PPP projects before President Aquino's term ends in 2016, versus five awarded through 2013. From a dollar-perspective, these projects could amount to more than $4B in infrastructure investments, or four times the $1B already awarded. All these shovels in the ground could provide significant stimulus for the economy as well as provide the infrastructure necessary for sustainable growth.

Significant Ramp-up: Infrastructure as a % of GDP 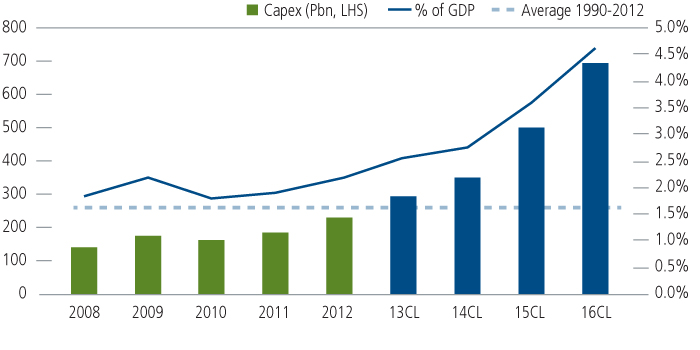 We maintain our positive view on the Philippines relative to other EM opportunities, but acknowledge it is not without risks. While we are optimistic that we will see progress from PPP infrastructure projects in 2014, we will continue to closely monitor these developments as execution is critical. In particular, we are watching developments related to a water tariff issue, where the government has sought to change terms mid-stream. The positive news is that similar cases have held up in third-party arbitration.

We have used the market pullback to add to consumer opportunities that may benefit from a short-term increase in inflation as well as financials that may benefit from increased investment related to PPP projects and recovery efforts. We're also following opportunities where valuations are becoming more reasonable, both in companies that we believe can directly benefit from increased infrastructure investments as well as those that are positioned to receive ancillary benefits.

The information in this report should not be considered a recommendation to purchase or sell any particular security.