In recent months, we’ve received many questions about how we expect emerging markets will perform once the Federal Reserve does begin removing monetary stimulus. Not surprisingly, memories of the May 2013 “Taper Tantrum” are top of mind for many investors. Then, the Fed’s communication about removing monetary stimulus resulted in a swift decline of approximately 16% in the MSCI Emerging Market Index over a few weeks.*

Declines were steeper still for countries like Brazil, India, Indonesia, South Africa and Turkey—which became known as the “Fragile Five” because of their dependence on U.S. dollar funding via their large current account and fiscal deficits. This was a difficult period to invest in emerging markets, but it had a longer-term benefit. For these countries and others headed down a similar path, this period provided a much needed “wake-up-call” to reduce their reliance on external funding sources and improve their fiscal positions.

To illustrate how many emerging market countries have evolved since the 2013 Taper Tantrum, and why we are optimistic that a similar event will not repeat itself during this recovery, we’ve provided a few comparisons below:

Fed policy has changed. We believe Chairman Powell’s speech at Jackson Hole last year marked a significant change with far-reaching impact. In this speech, Powell ushered in a new Fed policy regime of targeting average inflation rates as opposed to a specific level. Subsequent Fed speeches have iterated a “wait-and-see” approach that differs from Fed policy of the past decade, when the Fed removed monetary stimulus each time inflation expectations approached its target.

Figure 1. Taper Tantrum versus now: Real rates are less likely to rise
In 2013, futures were pricing in a sharper rise in policy rates as compared to this cycle 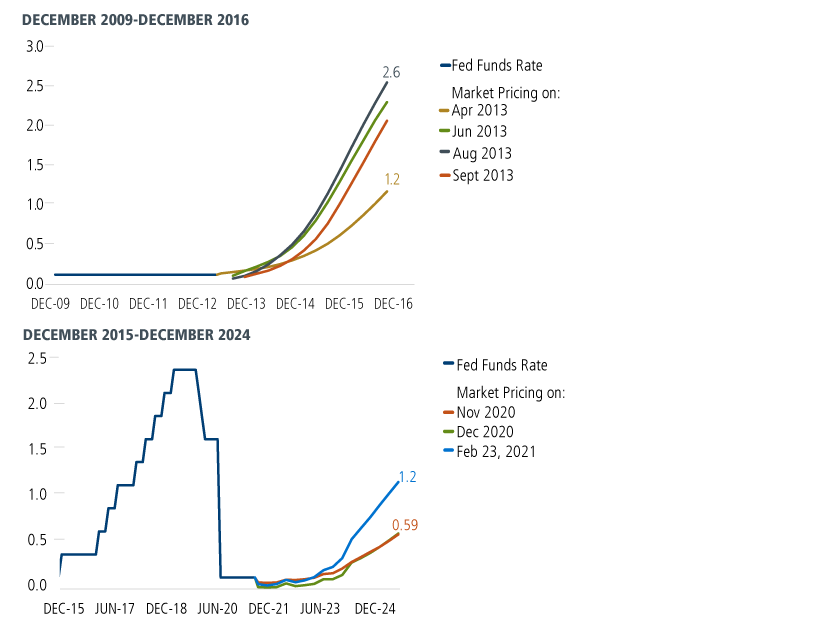 Past performance is no guarantee of future results. Source: Morgan Stanley, Global Macro Briefing, February 24, 2021, “Why EMs should not fear a taper tantrum replay” using Bloomberg and Morgan Stanley Research.

Emerging market fundamentals have improved. This is the key difference today versus 2013. Heading into 2013, the emerging markets were coming off of a very strong decade of flows and outperformance. Economies were “overheating” amid concerns that rising levels of inflation and twin-deficits would require foreign funding. Today, there is very little concern about increased inflation as the Covid crisis has created slack in many emerging market economies.

Past performance is no guarantee of future results. Source: J.P. Morgan, "EM Spotlight: EM vulnerability to a Fed Taper," February 24, 2021.

Current account deficits (CADs) have narrowed. Heading into the 2013 Taper Tantrum, the Fragile Five were running CADs of 4.4% of GDP. Today that figure is 0.4%. Most countries are in a stronger CAD position than they were in 2013, reducing the need for external funding.

Figure 3. With a few exceptions, current account deficits have narrowed since the Taper Tantrum

Strong growth outlook: Unlike 2013 when the Fed signaled tightening during a period of still-uncertain global growth, the global economy—including emerging markets—is in a better position to accelerate today. We anticipate healthy demand from developed markets as this recovery unfolds, supported by strong consumer and corporate balance sheets—making this a different environment than in 2013.

So while history could repeat itself, the factors we’ve outlined here give us confidence that history is more likely to rhyme and perhaps rhyme more closely with the 2004-2007 tightening cycle than the tightening cycle of the past decade. From 2004 to 2007, the Fed embarked on a very gradual tightening cycle, one which did not impact current account deficits or global growth, and it was a period when emerging markets continued to perform very well.

The pullback we’ve seen in recent months across the emerging markets, due in part to concerns for higher rates and a stronger dollar, does not foretell a repeat of the 2013 Taper Tantrum period, in our opinion. Instead, we see it as a healthy correction analogous to what we saw in early 2004.

Figure 4. Similarities between 2004-2007 cycle and now: A more positive rhyme for emerging markets

The 2004 correction gave way to a very strong recovery and several more years of emerging market outperformance. We believe once the market becomes comfortable with global vaccine rollouts and herd immunity, we will see a sustained resumption of the trends that began last year, including outperformance of emerging markets. The biggest risk to this view would be if the Fed suddenly changed course and reinstated the policies of the past decade, a scenario we view as unlikely. If this risk did materialize, it would be a significant concern for all global risk assets, not just the emerging markets.

As a result of political or economic instability in foreign countries, there can be special risks associated with investing in foreign securities, including fluctuations in currency exchange rates, increased price volatility and difficulty obtaining information. In addition, emerging markets may present additional risk due to the potential for greater economic and political instability.