Perspectives on Growth and Inflation Expectations for a Post-Covid World

When thinking through which asset classes, sectors, and factors to favor within the Calamos global and international portfolios, we frame our discussion around which cyclical regime we will be in based on the outlook for growth and inflation. With growth along the x-axis and the inflation level on the y-axis, we can see four regimes. Each is historically associated with distinct return profiles for asset classes and risk factors. 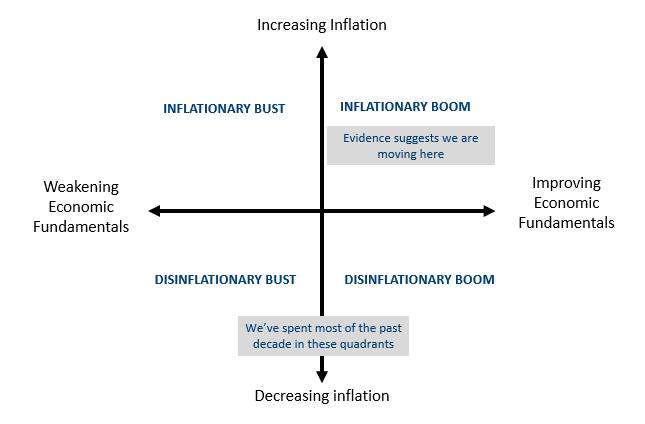 Today as it relates to growth expectations, the combination of fiscal/monetary stimulus and improving business/consumer confidence should provide a powerful cocktail for growth into 2021. Current low inventory levels globally are likely to fuel a sharp acceleration in growth when restocking begins.

The outlook for inflation is more nuanced and is one of the most frequent and lively topics of discussion within our global investment team. On one hand, easier fiscal and monetary policy should support reflation, and the reversal of the disinflationary globalization trends experienced of the past several decades removes a disinflationary headwind. But technological disruption, elevated global debt levels, and demographic trends in much of the world are likely to continue as disinflationary forces. This debate has been playing out in financial markets over the last quarter, with increasingly frequent “rotations” back and forth across factors like growth, quality, value, and cyclicality.

Taking a step back, skepticism around a higher inflation outlook is reasonable considering the experience of the last decade. The fiscal and monetary responses to the Global Financial Crisis (GFC) were unprecedented at the time, even if they were not as quick and far reaching as they were at the onset of the Covid-19 crisis. It became a consensus view that these policies would result in higher levels of global inflation from 2010 onward. In reality, the opposite occurred as the scar tissue from the great recession proved lasting; and governments, businesses, and individuals sought to repair their balance sheets. From a fiscal standpoint, easy policy quickly gave way to austerity and burdensome regulation. Instead of accelerating, the velocity of money continued to march lower (Figure 2). Central bankers were highly vigilant to inflation risk due in part to flawed logic around the relationship between employment and inflation pressures. As a result, they were quick to remove monetary stimulus at the first hint of a recovery only to repeatedly find themselves more concerned with deflation. 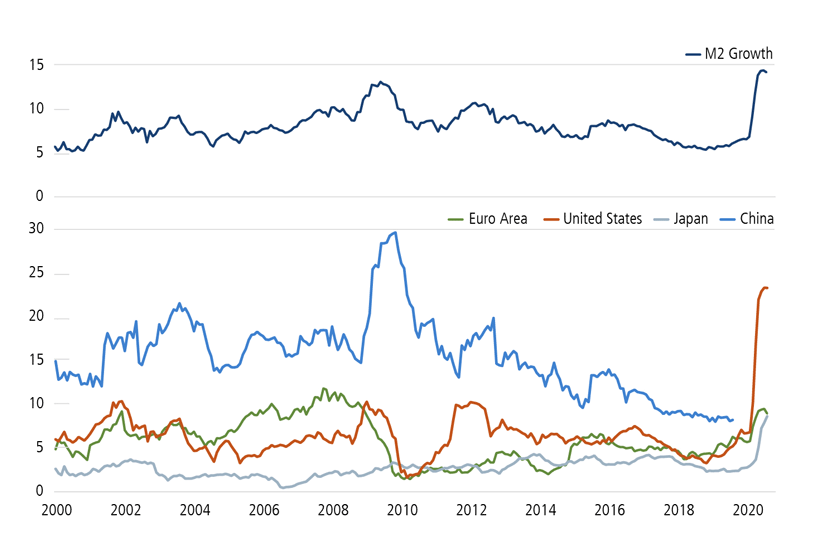 So why might this time be different? First, central banks and particularly the Federal Reserve, appear to have thrown in the towel on the Philips Curve and are embracing a new framework of “average inflation targeting.” The main consequence of this is expected to be a much greater tolerance for inflation to persist above the Fed’s 2% target. Consequently, this should mean the risk of any monetary policy tightening is years away.

On the fiscal policy front, politics can change rapidly, particularly with the U.S. election less than a month away. But the fiscal response to the economic contraction related to Covid-19 has been massive. And an important feature of this response has been government credit guarantees for the commercial banking system to channel support and stimulus through to the economy. This is happening in concert with the huge expansion in central bank monetary support, and we can see this clearly in the spike in money supply growth and bank credit growth across the world. Coming into 2021, there’s no assurance that austerity won’t become a concern again, but that seems unlikely given broad support in the U.S. for infrastructure spending to increase as part of the next stimulus package. And in Europe, the movement toward a fiscal union—via the issuance of supranational bonds to support regional recovery efforts and to fund an agenda of environmentally friendly infrastructure investment—indicates an increased appetite for fiscal stimulus from the austerity of the past decade.

Another important difference is the health of consumers and corporations today versus where they stood in 2010. The Covid crisis has exacted a crushing toll on the service sector, bringing unprecedented increases in unemployment and loss of business activity, but the fiscal policy response was equally swift. Within the U.S., generous unemployment benefits resulted in many individuals earning more than they would have if they had remained employed. Meanwhile, as small and medium-sized businesses adapted to a “consume-at-home model,” many received support via loans that could be converted into grants. Outside of the service sector, many industries have been resilient through the crisis, quickly adjusting to work/consume-from-home business models and identifying efficiencies that wouldn’t have been exploited otherwise.

As a whole, the U.S. consumer savings rate has increased dramatically. Wages have been steady but consumption has been lower due to decreases in transportation costs, entertainment, and travel. Balance sheets have also improved as home values have risen and equity markets have once again reached all-time highs, which is quite remarkable during such a deep economic contraction. We are very encouraged by the strength we are seeing in the U.S. housing industry and demand for housing globally. These trends could have a significant multiplier effect throughout the global economy. This is a much different environment than during the GFC when many consumers’ balance sheets were decimated by collapsing home equity, a stock market that took nearly three years to return to its peak, and credit issues caused by foreclosures and permanent job losses.

The reversal of globalization in recent years represents another shift in the inflationary dynamic. The globalization of supply chains and labor was a significant disinflationary force for the better part of two decades, but that appears to have run its course. More recently we are seeing a re-orientation of supply chains, driven by a combination of political and regulatory dynamics and less-favorable cost efficiencies to be gained from outsourcing labor and production, as compared to what was the case in the early 2000s.

To balance these more reflationary developments, several strong disinflationary forces to remain. Technological disruption seems ubiquitous at times, and has only been accelerated by Covid. Demographics in most of the world remain a disinflationary headwind. And debt levels, particularly government debt, continue to rise globally toward and beyond levels that can weigh heavily on future growth potential. These have been formidable forces over the past decade and will likely remain for the foreseeable future.

Why is the inflationary outlook worth taking the time to understand for global equity investors? If we do see a shift in regimes from disinflationary growth to inflationary growth, it would be consequential to many portfolio construction decisions. In a disinflationary growth world, market leadership tends to demonstrate strong organic growth, lower operating and financial leverage, and high quality fundamental characteristics. Indeed, this is has been part of why so-called “secular growth stocks” have outperformed “value stocks” to such a great extent for the past decade, and also why the U.S. equity market has outperformed other regions given a greater constitution by these types of companies. We have covered this dynamic in detail in previous posts and commentaries.

In a world where growth is improving at the same time inflation expectations are increasing, leadership transitions to business with higher fixed-cost structures that will realize significant margin improvement from better top-line growth. Not surprisingly, many of the companies that share these characteristics are in industries that underperformed for most of the past decade, particularly in sectors like industrials, materials, financial services, and parts of consumer discretionary. And they also tend to fall disproportionately outside of the United States. It’s important to separate cyclically challenged fundamentals from a decade of weaker economic growth and low inflation from secularly challenged or disrupted businesses, so bottom-up selection will remain critical. And many great growth businesses can continue to thrive during periods of reflation, so we don’t believe those should be abandoned, either. But we think understanding whether we are entering a new inflationary growth regime and positioning portfolios appropriately for that will be a critical factor in portfolio performance in the coming years, and one that may require significant positioning rotations for global investors both regionally and by industry.

In the months and quarters ahead, we will closely monitor the political environment and fiscal policy momentum, the growth of monetary aggregates and bank credit creation, corporate fundamentals, and market internals to further understand whether a regime transition is upon us.

At this point, the combination of inflationary and deflationary forces calls for a balance of cyclical and secular growth. However, monitoring shifts from here will be increasingly consequential. After years of underwhelming global growth and persistent disinflation, the likelihood of a transition toward stronger growth and higher inflation is as high as it’s been in a decade. Such a transition has the potential to catalyze a transition in market leadership toward some of the cyclical laggards of the last decade, and we have actively adjusted our portfolios to reflect our understanding of this dynamic.

As a result of political or economic instability in foreign countries, there can be special risks associated with investing in foreign securities, including fluctuations in currency exchange rates, increased price volatility and difficulty obtaining information. In addition, emerging markets may present additional risk due to the potential for greater economic and political instability.