In my last post, I took a look at some ways that EM infrastructure buildout is supporting investment opportunities in China. In this post, we’ll focus on how the theme of health and wellness in EMs provides a tailwind to companies in a variety of industries.

Graying of EM Populations
Many people are aware that aging populations in developed markets (most notably in Japan and the United States) are driving increased demand for health care services and innovations. What’s likely less well known is that related demographic trends are afoot in a number of emerging markets. The 60+ age group in a number of emerging countries—including Thailand, Indonesia, Malaysia, Korea and India—is growing faster than it is in Japan. Estimates suggest that the 60+ populations in EMs will increasingly dwarf those in more developed regions (Figure 1). Just as in the developed markets, this aging population is creating accelerating demand for hospital procedures, pharmaceuticals and cosmetic procedures.

Note: In regard to the speed of population aging, the ranges of percentages inside the bars are the proportions aged 60 years or over in the population, at the beginning and the end of the respective time periods. Source: World Population Ageing 2013, United Nations, Department of Economic and Social Affairs, Population Division (2013).

Healthy Lifestyles
As EMs become more prosperous, their populations have been able to invest more in health and wellness. For example, EM consumers are spending more time exercising and trying to stay fit. Figure 2 from China Reality Research illustrates this trend among Chinese consumers.

Figure 2. EM Consumers: Healthfulness and Activity
Question: Which sports have you done more/less of over the past three years? 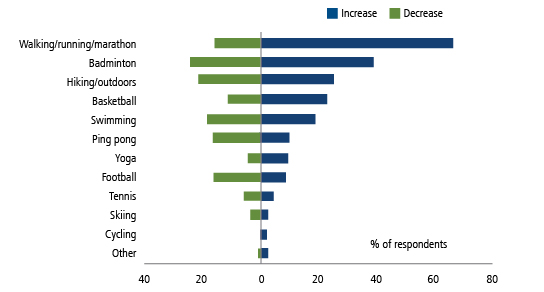 Companies around the world are benefiting from EM consumers’ increased focus on healthy lifestyles. For example, EM consumers often prefer recognized international brands for sportswear and footwear, supporting growth opportunities for global leaders based in developed markets. However, EM companies are also profiting. For example, our team has identified growth opportunities among emerging Asia textile companies with specialized expertise in active clothing.

As the emerging market growth story evolves, our research team is actively seeking ways to benefit from changing demographics and consumer trends. Our research has resulted in opportunities ranging from small-cap Chinese and South Korean health care companies, to mid-cap Chinese and Taiwanese textile firms, to large-cap multinationals. As we look forward, we believe evolving demographics and changing consumer preferences will continue to be key drivers of returns in emerging market investing.