Growth deceleration, tighter global liquidity conditions and escalating trade disputes have created inhospitable conditions for Chinese equities this year. Some have suggested that what we are seeing now is a prelude to a much steeper selloff, harkening back to the correction of 2015. However, because there are key differences between then and now, we are not ruling out a rebound. For one, China’s economy is healthier. Second, China is taking proactive measures, using multiple levers of fiscal and monetary authority to shore up its economy and markets.

The Chinese economy is on a much stronger footing now than in 2015. Consumption growth is still accelerating across many data points, and imports and industrial activity have stabilized at stronger levels. Below, we have charted aggregated trends in consumption and industrial measures over time. Consumption data (a measure of the “New China Economy”) has held fairly steady and industrial measures (“Old China Economy”) are much improved compared to 2015. Both sets of data points have rebounded from their lows earlier this year. As we discussed in our recent outlook, what we saw in the second quarter could well have been an “air pocket” in the growth cycle—not unlike what we’ve seen many times in the U.S. expansion. 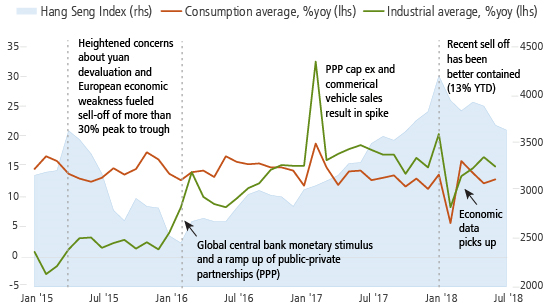 Another point of differentiation between 2015 and today is China’s increased commitment to de-risk its financial sector. There’s definitely short-term pain involved, but as the adage goes, an ounce of prevention is better than a pound of cure. In contrast, the government’s principal motivation in 2015 was to shore up the economy to pave the way for a domestic political agenda. Finally, although the yuan has weakened by more than 8% versus the U.S. dollar over recent weeks, it is essentially flat versus levels of two years ago.

A U.S.-China trade war is an unknown risk that didn’t exist in 2015, and it remains to be seen how trade policies will impact business confidence, investor sentiment and company fundamentals in upcoming quarters. However, China is using strategies similar to those that proved effective in 2015. Then, monetary stimulus, a ramp up in public-private partnerships, and a weaker currency helped stabilize equity markets and contributed to a surge in industrial activity. The government is once again employing these three tools today.

It’s also worth noting that some of the weakness in 1H 18 economic data was self-inflicted. More specifically, Beijing made moves to de-leverage “Old China” areas of the economy and target liquidity toward “New China” sectors. This rebalancing is part of the long-term China growth story. Net-net during the quarter, however, we saw tighter monetary conditions at the same time PPP project-reviews and changes to property programs were weighing on overall growth. Recent announcements of easing in all three of these variables should provide some near-term lift.

Chinese companies are well represented in our portfolios, and many of our strategies remain overweight to China. However, the near-term risks have increased, and we expect U.S.-China trade uncertainty to create turbulence in coming months. Against this backdrop, we are allocating capital with added caution, reducing and rebalancing portfolio exposures as necessary. Across our portfolios, our positioning emphasizes “New China”— consumer and secular growth—but we maintain some exposure to the cyclical opportunities that continue as “Old China” rebalances. Further, to provide potentially lower-volatility access to the Chinese equity market, we continue to utilize convertible securities in a number of our strategies.

The Hang Seng Index is a measure of the performance of Chinese equities. Indexes are unmanaged, not available for direct investment and do not include fees and expenses.