Is the Clock Ticking on U.S. Economic Expansion?

I’m often asked when a recession will hit the U.S. economy. People worry that since we’re nine years into this current expansion phase, the end is right around the corner. While it’s true that this expansion is unusually long, it’s not unprecedented. In 1991, the U.S. economy began an expansion that lasted 10 years. Also, this growth phase has been unusually shallow. As shown in Figure 1, the annualized GDP change has only been 2.2%. That’s lower than the growth rates we’ve seen during the previous expansions, and suggests that we should view this cycle through a different lens.

Think of this economic expansion as being more like the tortoise than the hare. Slow and steady growth may not be exciting, but it may be more sustainable. Right now, there’s little to suggest that the end of this economic cycle is imminent. There’s a lot of economic data trending in a positive direction. Indications are that corporate earnings announcements over these next weeks will be strong. Job growth remains healthy and home prices are rising. Tax reform and de-regulation provide long-term tailwinds for large and smaller businesses alike. Corporate share buybacks and M&A activity have been brisk. The Fed is raising rates, but these moves have continued to be gradual and largely expected. Inflation is rising but not out of control. Also, although this current GDP expansion began in 2009, it was largely confined to higher earning households. As middle and lower income households strengthen their footing, consumer activity can help lengthen the expansion. 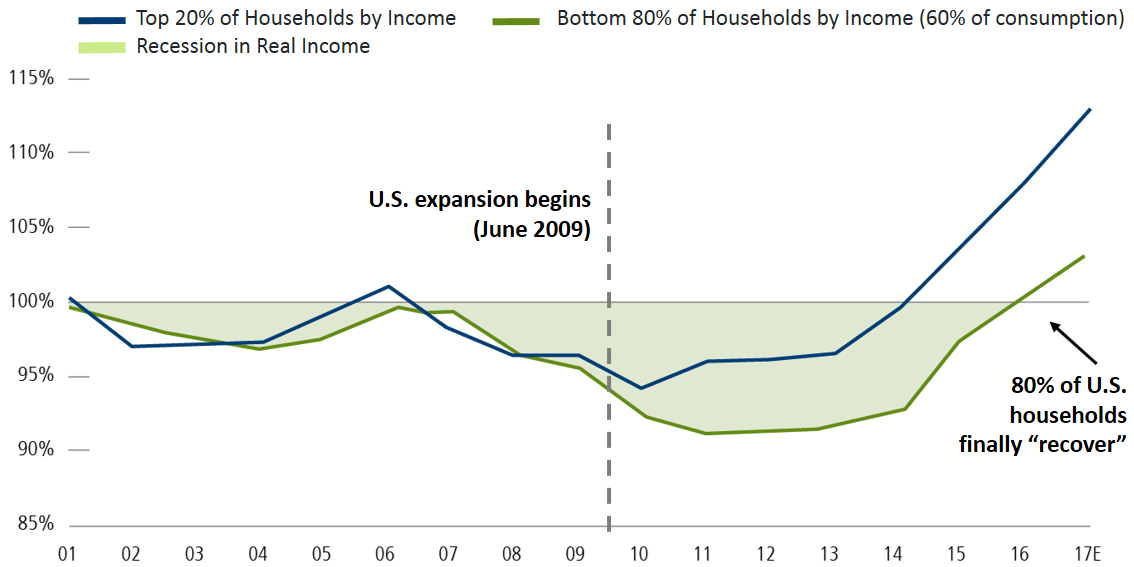 These days, any discussion of the health of the U.S. economy leads to the topic of tariffs. There’s a lot of concern about tariffs, and I expect short-term disruptions in the markets and some industries. Even so, I don’t foresee a deep and protracted trade war. I believe Washington simply wants a fairer footing in the global economy for U.S. businesses and protection for intellectual property. Rhetoric has been heated, as it often is in ultimately productive negotiations. Turning a blind eye to trade imbalances and intellectual property rights would be kicking the proverbial can down the road; and that’s not something any economy can afford.

Even though I believe the U.S. economy is positioned for continued growth, that doesn’t mean I believe investors should put their asset allocations on cruise control. It always makes sense to ensure your portfolio is well diversified, and positioned not just for the current environment but also for the road ahead. This is especially important now because of how much the investment landscape has changed in 2018. After an unusually long period of subdued volatility, we’ve seen a return to more typical conditions. Against the backdrop of a maturing economic cycle, interest rate increases and political wrangling, volatility isn’t likely to return to abnormally low levels.

However, there are still plenty of opportunities—especially for active managers who can shut out the short-term noise. In particular, we continue to identify opportunities among growth-oriented stocks. Convertible securities are also well positioned for a rising rate environment: Historically, they’ve been more resilient when rates rise compared to traditional fixed income securities. Finally, alternative strategies may be a good choice for diversification and achieving income goals in an environment where investment grade bonds face headwinds and stocks are more volatile.

Past performance is no guarantee of future results. Opinions are as of the publication date, subject to change and may not come to pass. Information is for informational purposes only and shouldn’t be considered investment advice. Equity securities fluctuate based on changes in a company’s financial condition and overall economic and market conditions. Convertible securities entail interest rate and default risk. Alternatives entail added risks and may not be suitable for all investors.

Active management, asset allocation and diversification do not guarantee investment returns and do not eliminate the risk of loss.