With China representing 36% of the emerging markets benchmark and making even more financial news than usual lately, the opportunity was front and center when investment professionals joined Nick Niziolek, CFA, Co-CIO, Head of Global Strategies, Senior Co-Portfolio Manager, for last week’s CIO Call on Emerging Markets. (To listen to the August 11 call, go to www.calamos.com/CIOemergingmarkets-8-11.)

Niziolek provided an overview on developments that have occurred since China was one of the world’s best performing equity markets last year and shared insights on understanding its market dynamics. He also reported that Calamos Evolving World Growth Fund (CNWIX) recently increased its still-underweight (24% versus the MSCI Emerging Markets Index as of June 30) to China in pursuit of a “considerable opportunity to catch up.”

“The overall Chinese economy continues to benefit from strong export demand as we see developed markets coming back online, and demand for goods out of China and other parts of Asia remains strong,” Niziolek said. The government’s zero tolerance strategy to COVID-19 has provided a level of resilience to its recovery, he added.

China equity market performance to date this year reflects what Niziolek described as “self-inflicted” wounds in the form of tighter monetary policy and increased regulation. He cited the China Communist Party (CCP)’s heightened regulation of the Chinese education sector, specifically targeting the after-school-tutoring market (read more in this post) and the actions against DiDi (a high profile IPO in the U.S. in June) and the subsequent fallout.

But, Niziolek said, “we’re seeing an important turn,” and pointed to updated commentary that followed the Politburo’s mid-year meeting in late July. “The tightening bias that was discussed in December has been removed, not yet to an ultra-accommodative bias,” he said, “but definitely to a more accommodative bias…Some of the anti-monopoly and regulatory commentary that was prominent in December was removed and softened in tone.”

The Calamos Global Equity team is both top-down and bottom-up when investing in emerging markets. Top-down involves both the cyclical views (monetary policy, economic conditions, different drivers of economies) and consideration of longer term secular tailwinds that can help companies and industries grow over time.

In China, says Niziolek, you also have to focus on “a third arrow”—and that’s China policy “and being on the right side of policy.” Chinese policies, including the regulatory framework and the end goal of the Chinese government, is critical for investors to consider in order be in a position to benefit from the significant opportunities available, according to Niziolek.

Toward that end, the team has begun a new series called The Visible Hand on the Investment Team Voices blog.

The team will be encouraged if those headwinds are removed, if a tightening bias is replaced with an easing bias, and if the framework of increased regulations eases or even pulls back, he said.

Niziolek also responded to a question about the U.S./China relationship, and how investors will access investment opportunities in the future.

“We’ve been pretty consistent over the years in our view that the U.S. and China are decoupling,” he said. After the Great Financial Crisis of 2008-2009 revealed China’s dependency on U.S. capital markets, “we’ve seen China working to develop their own financial system, to develop their own capital markets, build their equity markets, their bond markets, moving forward on having the Chinese yuan become more of a trading currency and reserve currency for other nations,” said Niziolek.

While the Trump administration and the U.S./China trade frictions may have accelerated the process, the Biden administration is doing nothing significant to roll anything back, he added.

There’s high interest in the delisting of ADRs and Chinese companies moving their primary listings back to Hong Kong and Chinese markets, Niziolek acknowledged. It’s a known risk and will take place over multiple years.

“Many of the larger companies and the companies that we’re invested in primarily do have dual listings today. Ultimately, while we might own an ADR in a specific security, they are fungible. We have the ability to transfer those positions into the Hong Kong listing if need be. We don’t see the need today.  There’s no risk near term on horizon that’s causing us to do so. But if we did, it’s not as if we’d have to go sell our ADR position and rebuy the Hong Kong position, creating some disruption in the market. It would just be a transfer type situation.”

“I don’t think it’s a reason not to be involved in Chinese equities,” he concluded. “And it’s not a reason for us not to own Chinese ADRs right now. We think that we have those risks covered right now.”

“Our base case is that China and Taiwan will ultimately reunite, that there likely is a path toward that. But it will likely be a slow process. And I think it’s unlikely that it will be in any sort of hot conflict. It’s a risk worth monitoring. But it’s not a risk where I think all of a sudden, China warships are going to show up and Taiwan’s going to be taken over,” he said.

Instead, the Hong Kong transition may be a playbook for how the two countries reunite, although slightly different because Hong Kong was officially handed over to China according to the terms of a 50-year agreement.

As a final point, Niziolek commented on the Chinese yuan and its recent stability. He contrasted it to the weakening of the yuan in 2015 and the resulting capital flight out of China.

Despite the risks of regulatory action, the tighter monetary policy and the concerns for near-term growth, the Chinese yuan has been resilient, he said. “I think that speaks to the government’s view that they do want stable, developing and deeper capital markets. While near term some of these regulations can catch us off guard and seem scary based on the headlines, ultimately China does want to be a destination for capital. They’re doing so in their own way.”

Stepping back from China, Niziolek and team continue to be positive on global risk assets and expect the combination of fiscal support as well as pent-up demand to drive emerging markets outperformance relative to developed markets over the next few quarters.

The outlook is predicated on a few factors:

CNWIX continues to be positioned with a barbell strategy of overweight cyclicals, overweight secular and more underweight in defensive holdings.

“We still think that’s the right way to be positioned,” Niziolek said. “Ultimately, defensive sectors are going to lag because the economies will start to recover. And you’re going to want a nice collection of cyclical opportunities that can participate in that recovery. To the extent that the regulatory pressures ease, we think there’s going to credible upside for many secular growth companies to participate in the recovery as well.”

Investment professionals, for more information about the Global Equity Team outlook or CNWIX, contact your Calamos Investment Consultant at 888-571-2567 or caminfo@calamos.com. 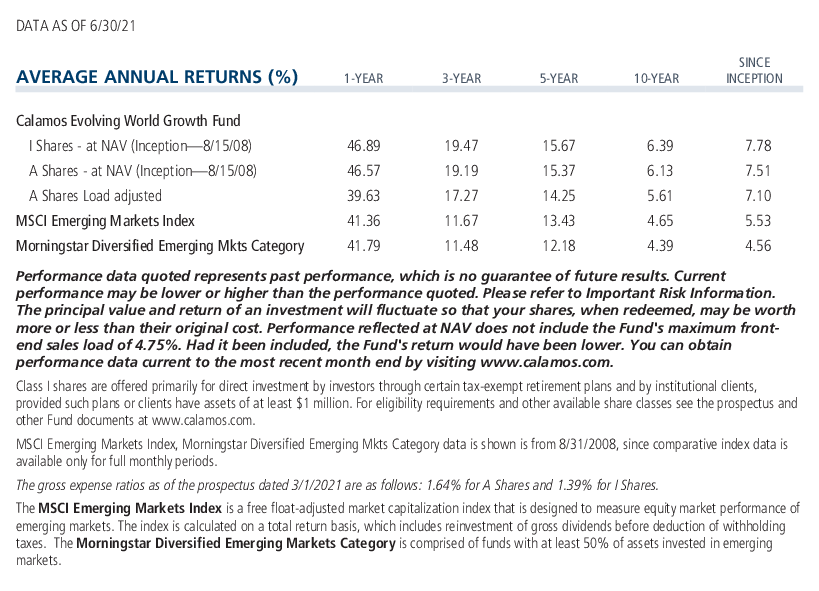 Opinions and estimates offered constitute our judgment and are subject to change without notice, as are statements of financial market trends, which are based on current market conditions. We believe information provided here is reliable, but do not warrant its accuracy or completeness. The material is not intended as an offer or solicitation for the purchase of any financial instrument. The views and strategies described may not be suitable for all investors. This material has been prepared for informational purposes only and is not intended to provide—and should not be relied on for—accounting, legal or tax advice. References to future returns are not promises or even estimates of are not to be relied upon as advice or interpreted as a recommendation. The securities highlighted are discussed for illustrative purposes only. They are not recommendations.

The Morningstar Diversified Emerging Markets Category is comprised of funds with at least 50% of assets invested in emerging markets.

Morningstar RatingsTM are based on risk-adjusted returns and are through 6/30/21 for the share class listed and will differ for other share classes. Morningstar ratings are based on a risk-adjusted return measure that accounts for variation in a fund's monthly historical performance (reflecting sales charges), placing more emphasis on downward variations and rewarding consistent performance. Within each asset class, the top 10%, the next 22.5%, 35%, 22.5%, and the bottom 10% receive 5, 4, 3, 2 or 1 star, respectively. Each fund is rated exclusively against U.S. domiciled funds. The information contained herein is proprietary to Morningstar and/or its content providers; may not be copied or distributed; and is not warranted to be accurate, complete or timely. Neither Morningstar nor its content providers are responsible for any damages or losses arising from any use of this information. Source: ©2021 Morningstar, Inc.