In a turbulent period for the markets, Calamos has been hosting a Calamos CIO Conference Call series for investment professionals.

Below are notes from a call Wednesday, April 29, with Eli Pars, CFA, Co-CIO, Head of Alternative Strategies and Co-Head of Convertible Strategies, Senior Co-Portfolio Manager, and Jason Hill, Senior Vice President, Co-Portfolio Manager. To listen to the call in its entirety, go to https://www.calamos.com/CIOmarketneutral-4-29

For highlights on last month's calls, see this post.

“We’re never happy with a negative number, but the fund held up quite well, given the magnitude of the drawdown. And,” Pars noted, “it’s participated in the recovery and rally back.”

During the drawdown, convert arb behaved largely as it has in previous drawdowns, although Pars noted that forced selling didn’t occur to the extent it has previously. However, there was some price discovery, which the fund was able to take advantage of. While convert arb was flat to slightly down, that created significant embedded value, which the fund began to realize as the market recovered.

Pars also commented on the issuance market, where issuance is 60% higher year over year. Convertibles are being issued by more household names than have been seen recently, including Carnival, Booking.com, Priceline, Southwest Airlines and well known retailers.

The hedged equity book has also added value by participating in the market’s bounce back. The focus there, according to Pars, is to keep the risk profile in line. Selling calls has been more lucrative but puts continue to be expensive. During the market’s rally, the team continues to add puts, whose objective is potential downside risk mitigation.

Within the Beta Range

The PMs acknowledged the challenges of the unprecedented volatility, which included the VIX peaking above 80 on March 16. Even so, the participation in the drawdown on those days was still in range with the fund’s longer term beta range of 10 to 30.

March 16 and March 12 were the worst days of the drawdown, and they were the third and sixth worst days, on a percentage basis, in the history of the S&P 500. They led to a rare down quarter for CMNIX. 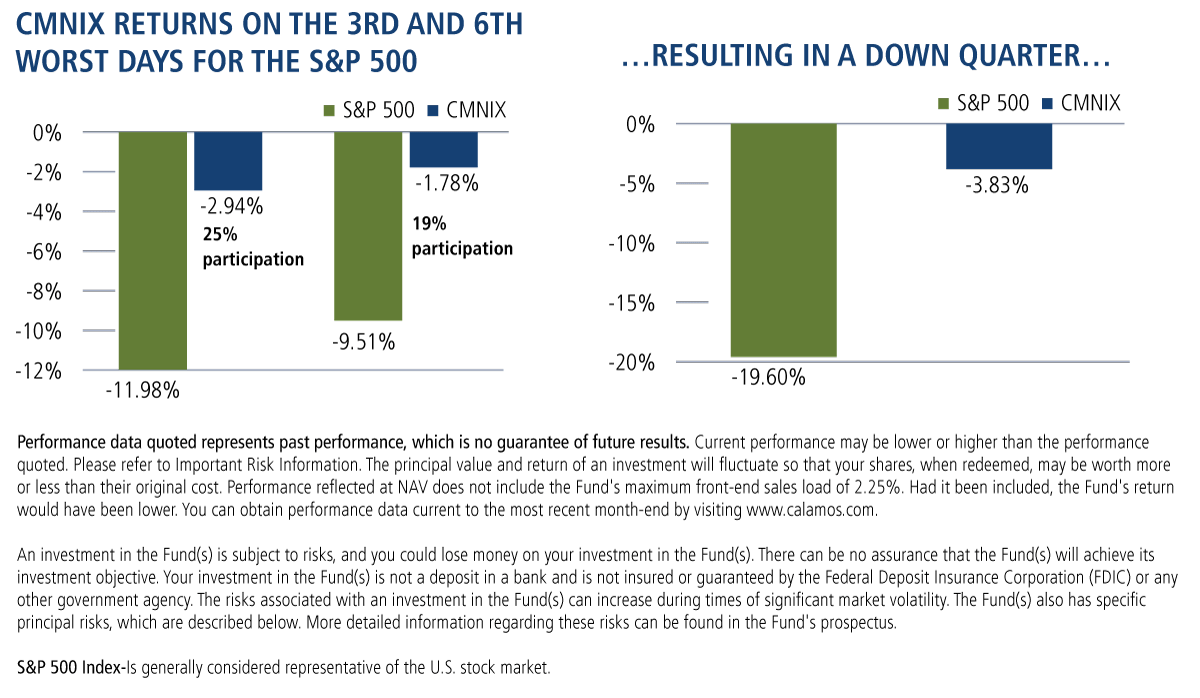 “With one-day moves of this magnitude, we’re just not going to have as many levers to change our potential returns in the short term,” said Hill. “With convertible arbitrage, for example, a lot of that strategy is about accruing and capturing value over time, so you won’t see that flow through immediately.”

Convert arb was selling off as the market declined, and rallying as it climbed—what Hill called a short-term phenomenon that isn’t sustainable, which may result in reduced beta longer term.

Most important, the team was able to stay opportunistic in each strategy in order to shape the portfolio going forward.

“Over time you’re able to see this vet out in the returns, even by looking at a little bit longer time horizon—such as the year-to-date performance. We’re very happy with that amount of downside when being compared to the equity markets and how much risk we are taking/not taking,” said Hill. 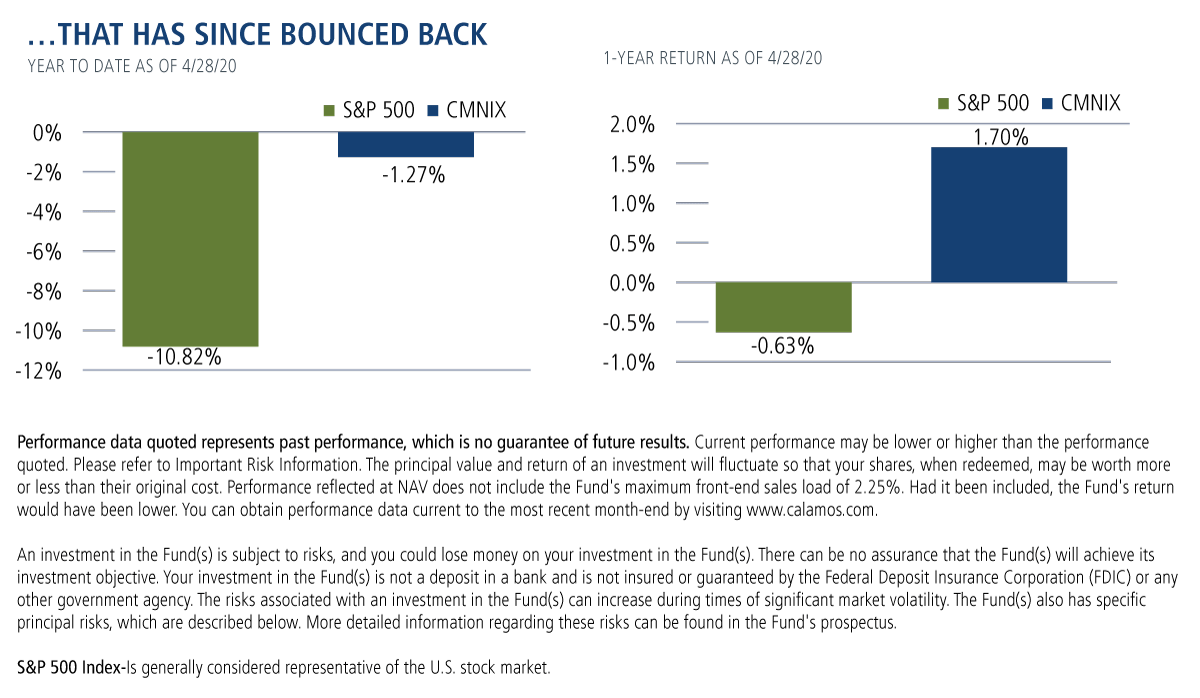 Asked for his view on the current level of interest rates, Pars said, “We don’t have a whole lot of rate risk or rate opportunity. We have earned a return that looks sort of like fixed income but we go about it a different way.”

Reduced interest rates detract from what can be earned on convert arb. But, Pars said, “The cheapness we see in the new issuance and secondary markets gives us a tailwind that offsets the rate move, at least for 2020.”

“With the 10-year Treasury at 60 basis points, you’re going to get a 6% total return in the next 10 years. Now you may get that quickly if rates continue to rally but that’s all you’re going to get, in 10 years. That’s not particularly compelling, and that’s why we think alternatives are an interesting part of the conversation right now,” he said.

Investment professionals, for more information about CMNIX, please contact your Calamos Investment Consultant at 888-571-2567 or caminfo@calamos.com. 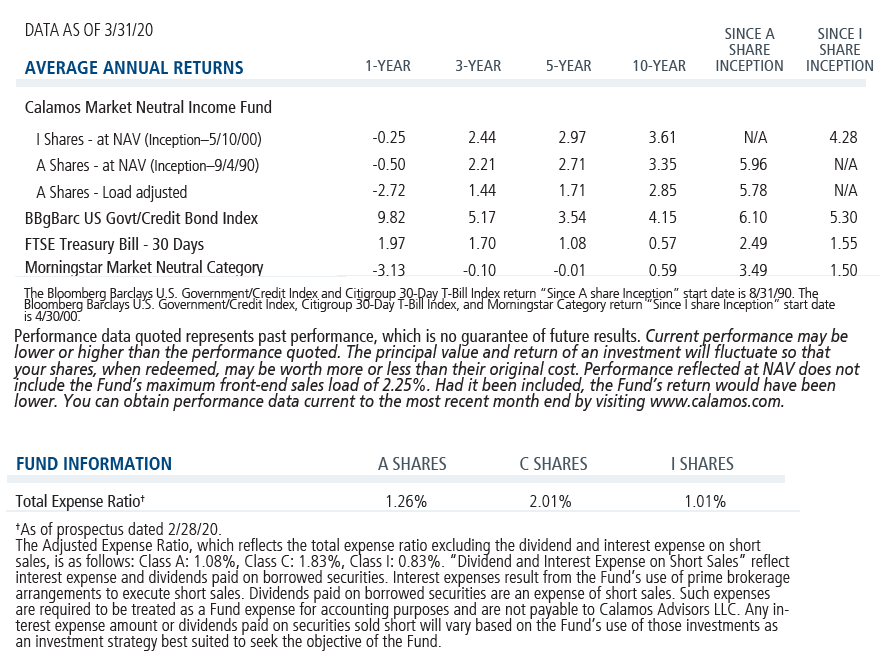 Options Risk—the Fund's ability to close out its position as a purchaser or seller of an over-the-counter or exchange-listed put of call option is dependent, in part, upon the liquidity of the options market. There are significant differences between the securities and options markets that could result in an imperfect correlation among these markets, causing a given transaction not to achieve its objectives. The Fund's ability to utilize options successfully will depend on the ability of the Fund's investment advisor to predict pertinent market movements, which cannot be assured.

Beta is a measure of the volatility, or systematic risk, of a security or a portfolio in comparison to the market as a whole.