Pullback Over, Now’s the Time to Believe in Small Caps

The unique appeal of small caps right now? “Business is booming, it doesn’t matter what sector, there are so many catalysts driving growth and,” says Brandon M. Nelson, “they’re really cheap relative to large caps.”

Small caps are so attractively priced that Senior Portfolio Manager Nelson has been steadily adding to his own personal stake in Calamos Timpani Small Cap Growth Fund (CTSIX).

“The team and I eat our own cooking, and we really like what we see right now,” he said at a recent meeting as he shared a few less well known aspects about the fund.

Since last year—a year the fund ended with a 63% return—Nelson has emphasized four themes about small caps:

We’ll briefly revisit each below.

Small cap leadership. When small caps have led, they’ve led for an average of seven years and for a minimum of three. 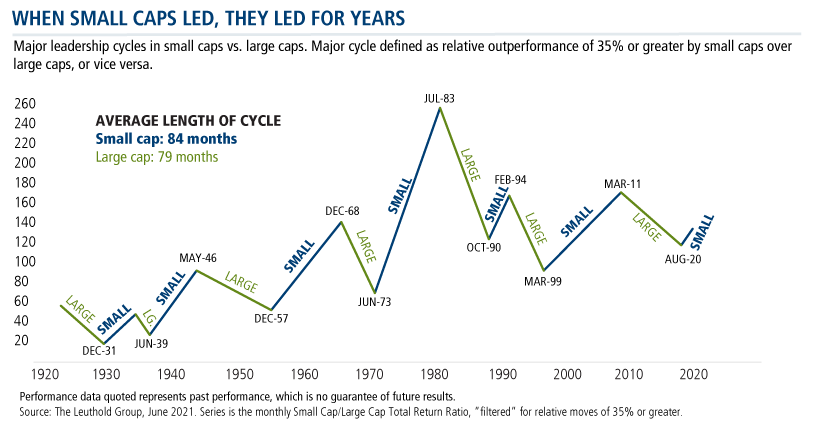 Small caps’ growth potential. Last week, The Wall Street Journal weighed in on the prospects of the current small cap rally extending. This is based on analyst forecasts of a “dramatic revival” in the profits of smaller companies.

“Analysts expect companies in the Russell 2000 to report that their earnings have more than tripled in the just-ended second quarter from a year earlier, according to Refinitiv. Due to pandemic shutdowns, many companies struggled in last year’s second quarter. S&P 500 earnings, by comparison, are projected to have grown about 65%,” The Journal reported.

“Outsize earnings growth” is expected to result in Russell 2000 profits quadrupling versus the third quarter of 2020 while S&P 500 earnings are projected to rise about 25%.

Small cap valuations. The Journal cited the Russell 2000 trading at the end of June at 17.7 times its projected earnings over the next 12 months versus 21.5 times for the Russell 1000 Index, based on BofA Global Research data.

In a shout-out to Nelson as a “believer,” the paper quoted him: “Anytime you can find an asset that has fantastic fundamentals and it’s inexpensive, you should jump all over that.”

CTSIX active management. The CTSIX team has a history of success in focusing on companies with underestimated growth. According to data since 2012, 75% of the fund’s holdings have on average shown sales upside surprise (compared to 58% on average of the Russell 2000 Growth Index)—helping drive the fund’s long-term performance. 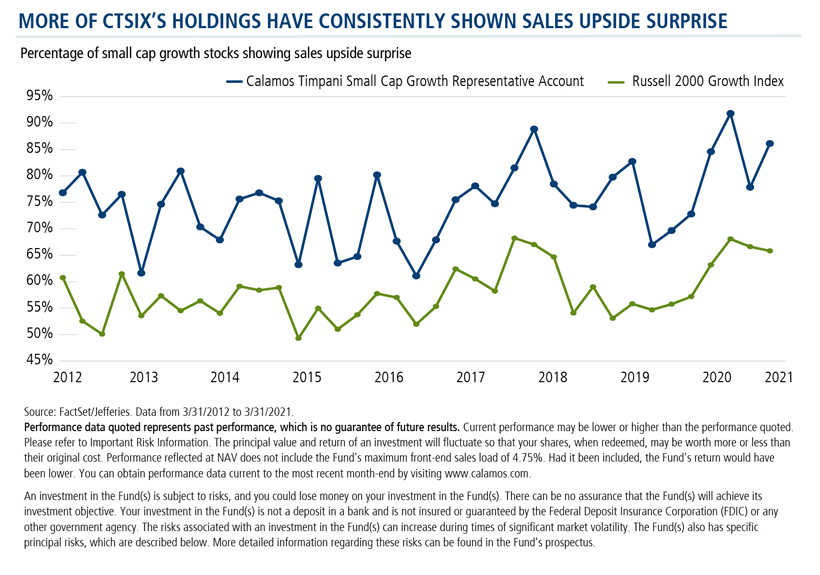 Halfway through 2021, Nelson is taking stock of the first six months and what lies ahead, offering the following notes about what may be less apparent about the fund.

‘Growthy’ CTSIX’s resilience. Coming off its strong 2020—a year when CTSIX outperformed its benchmark by more than 2800 basis points—the small cap growth fund hit a rough patch in the spring. 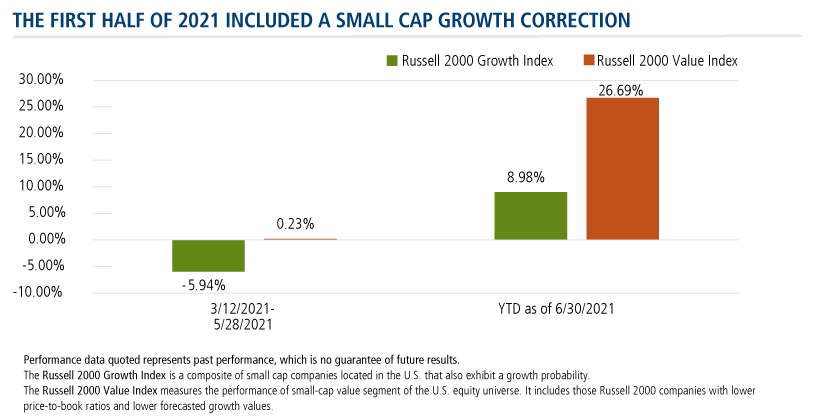 But here’s what may have been overlooked: “A storm came through town, and CTSIX did just fine,” Nelson says. And, in mid-June, he declared the small cap correction over. 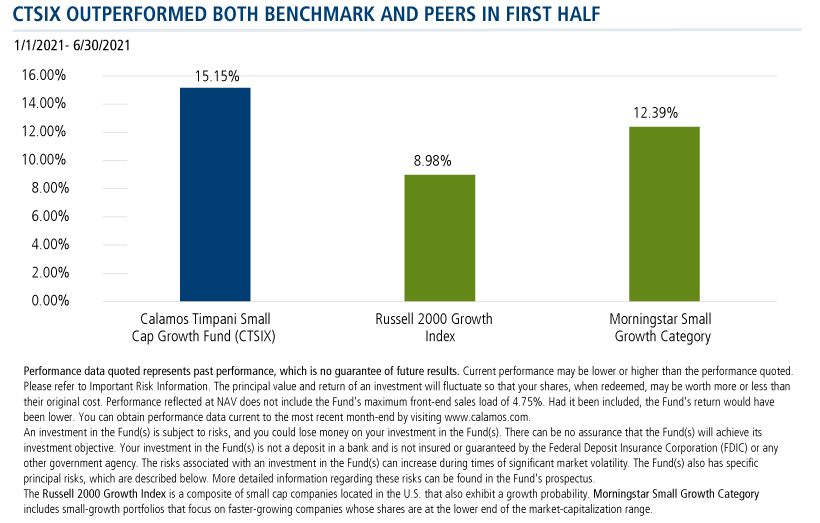 A fund that’s as “growthy” as CTSIX (see below) might have been expected to struggle in a rotation to value, not overperform, Nelson notes.

A microcap advantage. As Nelson anticipates an extended period of small cap dominance, he includes microcap outperformance in his forecast. CTSIX had a relatively low asset base at about $365 million by the end of June, giving it plenty of excess capacity to own microcaps. This is a competitive advantage.

Further, he predicts, “What’s going to happen, and we saw this happen September through March, is that money pours into small cap ETFs, and this disproportionately helps microcap stocks. They’re sloppier traders, they’re underowned, and a lot of our peers can’t navigate there.” 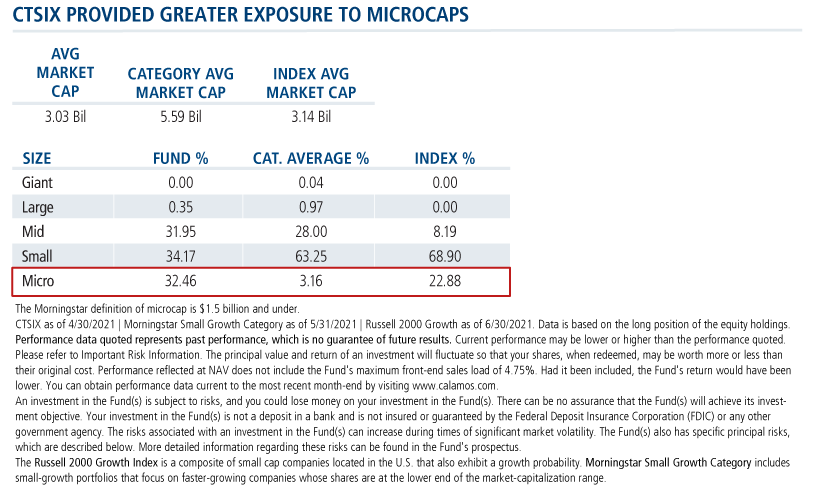 A technical perspective. As a final note, Nelson gets technical, showing this moving average chart of CTSIX as the “opinion of the marketplace.”

“This is similar to the charts we look at for the stocks in our portfolio. If this chart belonged to one of our holdings, I’d like it. The fund is sitting on support [the orange line 150-day average].

“It’s all just part of a mosaic,” Nelson continues, “but we really like where we are right now.” 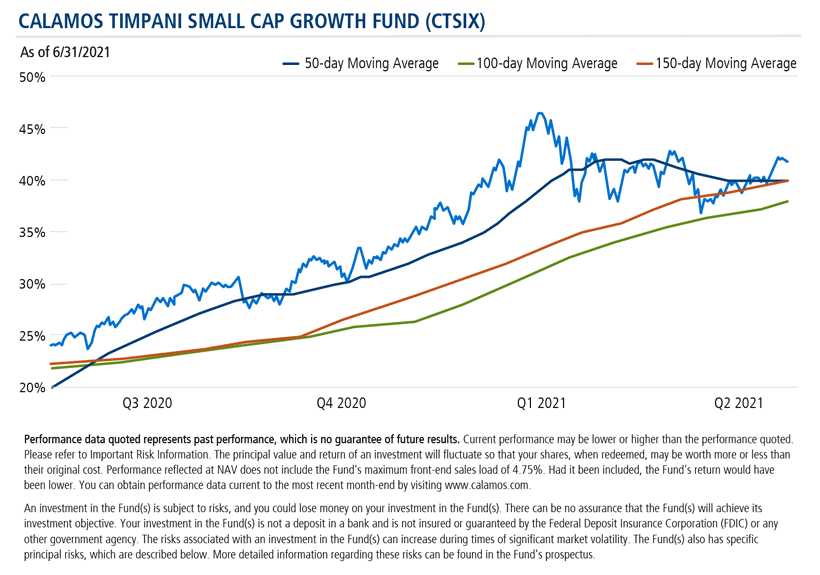 Investment professionals, for more information about Nelson’s small cap outlook or CTSIX, contact your Calamos Investment Consultant at 888-571-2567 or caminfo@calamos.com. 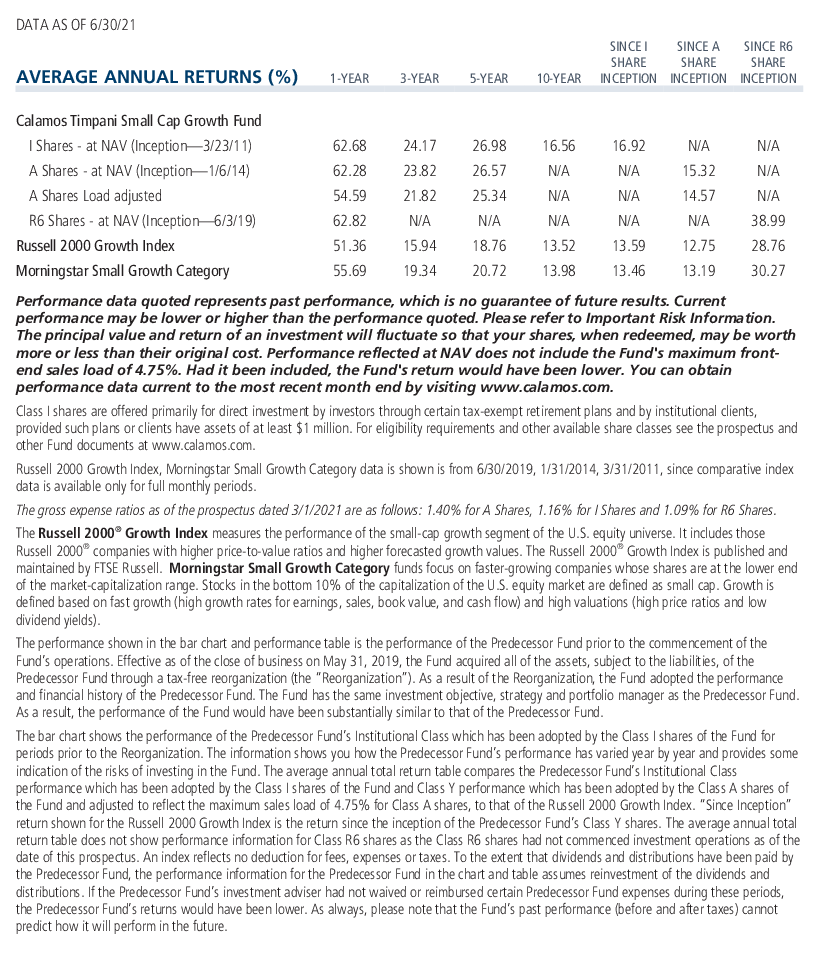 The Morningstar Small Growth Category includes small-growth portfolios that focus on faster-growing companies whose shares are at the lower end of the market-capitalization range.

The Russell 2000 Growth Index measures the performance of the small-cap growth segment of the U.S. equity universe. It includes those Russell 2000 companies with higher price-to-value ratios and higher forecasted growth values.