Starting in the early 1800s, back when the United States was an emerging market, convertible securities were used to finance the building of railroads, steel manufacturing, distilling, steam pumps, gas pumps, the telephone and the telegraph.

Fast forward 200 years, and convertibles are increasingly being put to use by companies in today's emerging markets. Convertibles are helping fund the development of e-commerce, electric vehicles, travel, and mobile payments, as well as more capital-intensive and cyclical industries.

Emerging markets companies’ use of convertibles has grown dramatically over the past five years. Consider: 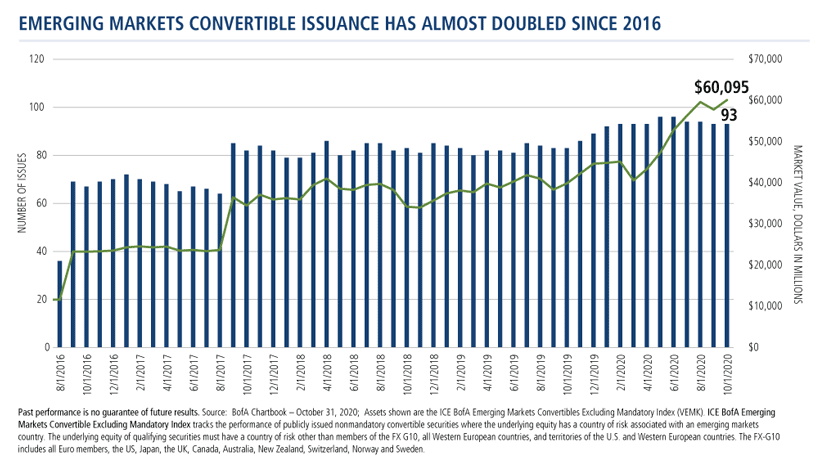 A Differentiator in the Calamos Approach to EM

The inclusion of convertible securities is a key differentiator in the Calamos Evolving World Growth Fund (CNWIX), and one that has contributed favorably in 2020. As much as 18.9% of the fund’s portfolio was invested in convertibles—both in local EM companies and in global businesses with significant revenue ties to emerging markets—as of September 30. For more, see Convertible Securities: A Key Lever in a Dynamic EM Approach by Nick Niziolek, CFA, Co-CIO, Head of International and Global Strategies, Senior Co-Portfolio Manager, and Speed.

Speed says the CNWIX team is encouraged by the issuance it’s seeing from companies in a range of industries in emerging markets, and it expects these trends to persist over the coming years as EM capital markets develop further. EM companies will be able to take advantage of the ability to access lower cost capital by embedding a conversion option into their debt. With convertibles, EM issuers should also be able to take advantage of their relatively high volatility as well as increasing stock valuations over time.

Investment professionals, for more information about the Calamos perspective on convertibles in emerging markets or about CNWIX, contact your Calamos Investment Consultant at 888-571-2567 or caminfo@calamos.com.