Michael Grant, Senior Co-Portfolio Manager of Calamos Phineus Long/Short Fund (CPLIX), will tell you that he finds himself in an unusual situation.

With essentially 0 beta and 0 exposure in a year when the S&P 500 is up 20% through July 31, the positioning of CPLIX may continue to be defensive for the foreseeable future as the market comes to terms with economies in transition, according to Grant.

With negligible exposure to markets, the returns of 6.34% YTD through July 31 have been mostly attributed to alpha. “If we can achieve low-double digit returns this year, without subjecting our clients to the inherent risks associated with current market dynamics by maintaining relatively new neutral exposure levels, we will have achieved our goal.”

The bull market driving equities since 2008 is over and he’s determined to avoid the risks of “overstaying” the post-2008 trade. “End-cycle markets can be schizophrenic and erratic, with extreme differentials of valuation,” he says.

With market valuations at or above all-time highs, and the S&P 500 where it is, current and anticipated market dynamics suggest vulnerability at current levels.

Grant elaborated on his perspective at a recent meeting of investment professionals, continuing themes covered in previous posts (see Equity Revival or Economic Slowdown: CPLIX’s Michael Grant Weighs in on the Debate).

Rate Cut Notwithstanding, the Economy Is Reacting to the Effects of Fed Tightening

Last December, the worst since the 1930s, was followed by the best first quarter in 40 years. Such a V-shaped bottom is rare in 100 years of equity history, according to Grant. The return of what he calls the “QE Forever” trade “allows the optimistic to assume that the global slowdown has been discounted. That everything goes up in value despite low confidence and low volumes of activity.”

Last year shouldn’t have ended the way it did, the S&P’s gain year to date is not sustainable, and it can’t be trusted, he says.

“In 2018, markets should have been up single digits. Earnings were up 15%. To have a market where you get that much P/E compression is very unusual. Typically, the market would have been up 5% instead of down 6%. I think that flip of performance of 10 points out of last year’s return and into this year’s return has created a bit of a mirage.”

Grant says the market’s recovery has enabled investors to take a benign view when, in fact, there are economic vulnerabilities to be reckoned with. He says investors “obsessed” with the Fed cutting rates and trade policy uncertainty tend to overlook a larger consideration: that the U.S. economy is still digesting the impact of the Fed tightening cycle, which ended in December 2018. (The fact that the economy is reacting to the tightening even as the Fed has just now taken an “aggressive U-turn” and eased 25 basis points will make the equities correction a much more complex and probably extended period of consolidation, according to Grant.)

The U.S. economy is still robust. In the first quarter of this year, GDP grew 3.2%, one of the best growth rates in 10 years. But, as shown below, the economy tends to look healthiest at the end of a tightening cycle.

In every tightening cycle—in 12 of the 12 most recent—the economy slowed enough to push leading economic indicators (LEIs) into contraction. And, that’s what Grant sees ahead for the current economy.

“Most indicators of economic risk for the remainder of this year suggest there’s more on the downside than the upside. When those leading indicators, which are basically barometers of the economics and the fundamentals, shift into contractionary mode, it tends to be a game-changer for markets.”

Grant likes this graph which uses the past nine business cycles beginning in 1974 to plot the performance of LEIs and the number of episodes when the S&P is up. The U.S. this year has been in the Stability stage. 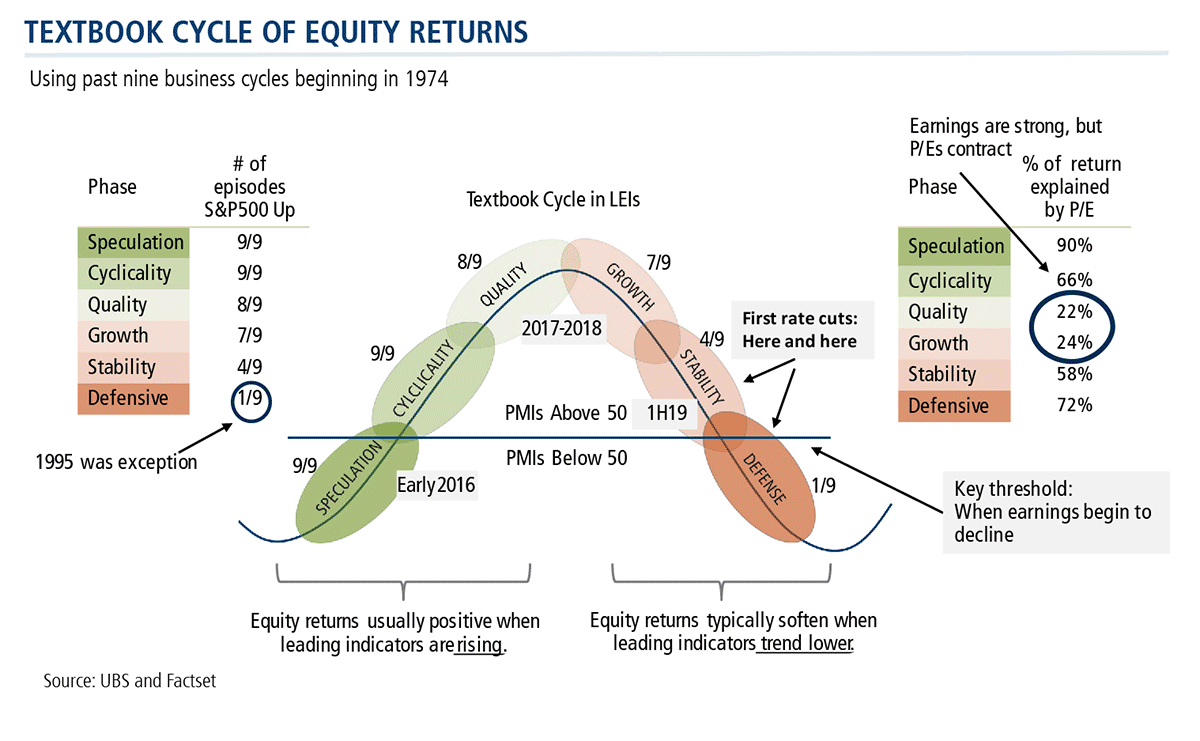 The key threshold is 0 because that’s when earnings go from positive or flat to negative. “Our business, as you know, is very earnings-centric, and a change in earnings tends to trigger a key psychological shift in how investors are looking at the risks,” Grant says.

Today’s backdrop is different from prior “mid-cycle” slowdowns, such as those in 2016 or 1995. Enthusiasm for Fed cuts is understandable, he says, but earnings estimates are too high. Investors need to anticipate a trough within six to nine months. Grant looks for a broad earnings recession, with earnings declining by 5%-10% in the second half of the year.

The End of an Era

The key to the strength of the U.S. market has been the combination of QE with sustained corporate profitability.

The U.S. has been an exception in a world where most equity markets are priced for mediocre growth. “The U.S. is the one market that is priced for the ongoing earnings outperformance that has marked the last 20 years,” he says.

Here’s Grant’s logic for risk-adjusted exposure to U.S. equities at this stage of the cycle. All of the secular tailwinds that have supported earnings look increasingly exhausted:

Half of the excess return from equities over the last 20 years came from margin expansion, according to Grant. Without that margin expansion, the S&P 500 would be 40% lower than it is today. It’s the end of an era for U.S. equities, says Grant. 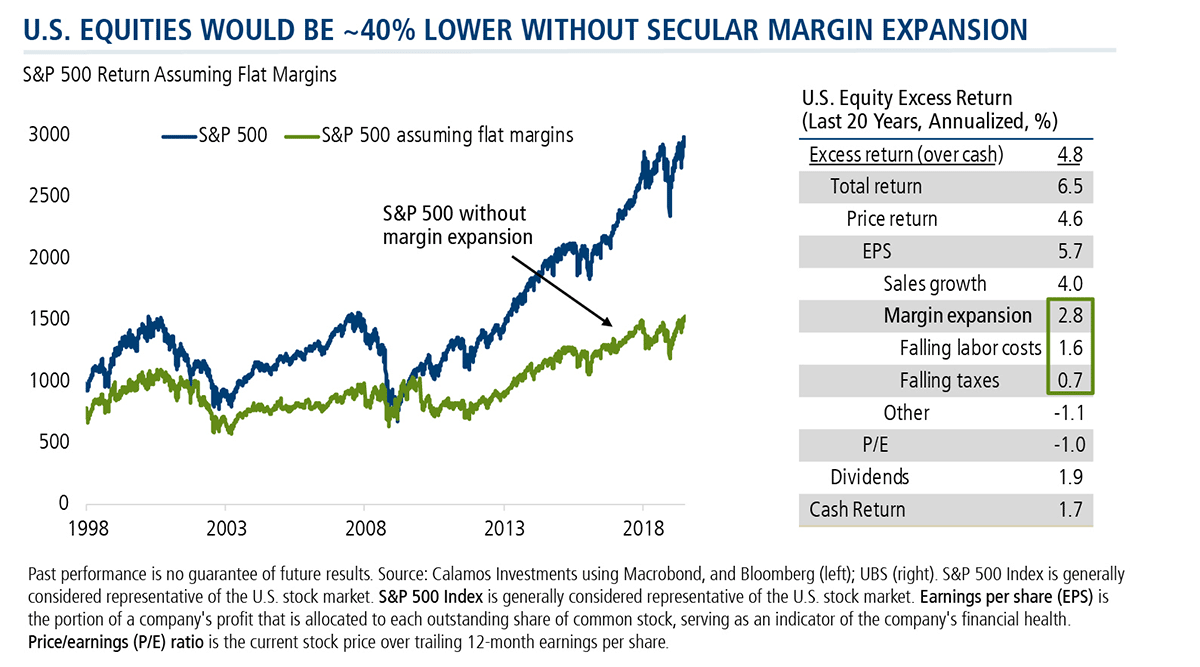 When the markets collapsed in December, many concluded that the U.S. was heading into a recession. But the market recovery this year has caused many to backpedal on recession forecasts.

The policies of recent years are a headwind, Grant says. “I don’t want to be a slave to the yield curve, but I don’t want to be so foolish as to ignore it either…We’re approaching a frontier at least for debt markets between slowdown on the one hand and real recessionary risks on the other. And, I think we’re going to get signals from the bond market as to which way it goes in the next three or four months.”

Grant considers a true GDP recession unlikely. At least two conditions not present today would be necessary: a meaningful rise in unemployment or other shock to incomes and stress in corporate credit. He continues to call for a “non-traumatic” transition from the post-2008 bull market through 2020, with the major benchmarks moving “erratically and tediously” within a 25% range. His S&P 500 year-end target is 2850 with a 50 basis point cut.

Financial advisors, for more on Grant’s perspective or for information on CPLIX, contact your Investment Consultant at 888-571-2567 or caminfo@calamos.com.

Alternative investments are not suitable for all investors.

The ISM Manufacturing Index is a widely-watched indicator of recent U.S. economic activity. The index is often referred to as the Purchasing Manager's Index (PMI). Based on a survey of purchasing managers at more than 300 manufacturing firms by the Institute for Supply Management (ISM), the index monitors changes in production levels from month to month.